This beautiful bas-relief panel is an exciting discovery of Prophet's sculpture, and only one of two polychromed panels by the artist known to survive today. This is only the second sculpture by Nancy Elizabeth Prophet to come to auction - the first was sold at Swann Auction Galleries on February 13, 2014. The most recent exhibition and monograph on the artist, Spelman College's 2007 Hale Woodruff, Nancy Elizabeth Prophet and the Academy located only two wood pieces in private collections, and a dozen sculptures in the collections of the Museum of Art, Rhode Island School of Design, the Whitney Museum of American Art, and the James P. Adams Library of the Rhode Island College. It included the poylchromed wood panel Untitled (Facing the Light) in the collection of the Rhode Island Black Heritage Society.

Prophet was a talented young sculptor who had a career in Paris as an expatriate artist for over twelve years, and was accepted into the French Salon. Prophet was the first African-American graduate of the Rhode Island School of Design in 1918. But unhappy in marriage and with her career prospects painting portraits in Providence, she "fled" to Paris in 1922 by herself. Despite often moving and struggling to make ends meet, her work in wood and marble was accepted into the Salon d'Automne, Sociéte des Artistes Français in Paris. She also had success exhibiting back in the US including at the Harmon Foundation and Fifty-Sixth Street Galleries, New York, and had been introduced to Henry Ossawa Tanner and Augusta Savage by W.E.B. Dubois. But with the onset of the Depression, she could not pass up on the opportunity of a teaching position to join Hale Woodruff at Spelman College in 1934.

This beautiful bas-relief panel is typical of the artist's body of work of solitary subjects with a solemn air. This panel is closely related in its composition and subject to Prophet's polychromed wood panel Untitled (Peace or Facing the Light), circa 1930. This large panel was exhibited first upon a trip back to Providence in 1932 when she was invited to join and exhibit at the Newport Art Association; the relief is today exhibited at the Newport Art Museum. While over 5 feet long, its height of the figures in profile is very similar to Walk Among the Lilies. The figures are also both in contemplative poses typical of Prophet's sculpture with their eyes shut.

In this rare instance, there is photo-documentation of two previous states of the sculpture and the artist's given title are known. In the Nancy Elizabeth Prophet Collection of Rhode Island College are the two photographs that show two earlier states of the carving. The first is inscribed "1st, Unfinished, Bas Relief in Wood & Something Pertaining to Life, Walk Among the Lilies" in ink, verso; the second "2nd. Unfinished", titled and signed in ink, verso. Special thanks to Marlene L. Lopes, Special Collections Librarian and Rhode Island College for permission to reproduce these photographs. Amaki pp 51, 132; Leininger-Miller p. 16-17, 24.
Set Alert for Similar Items 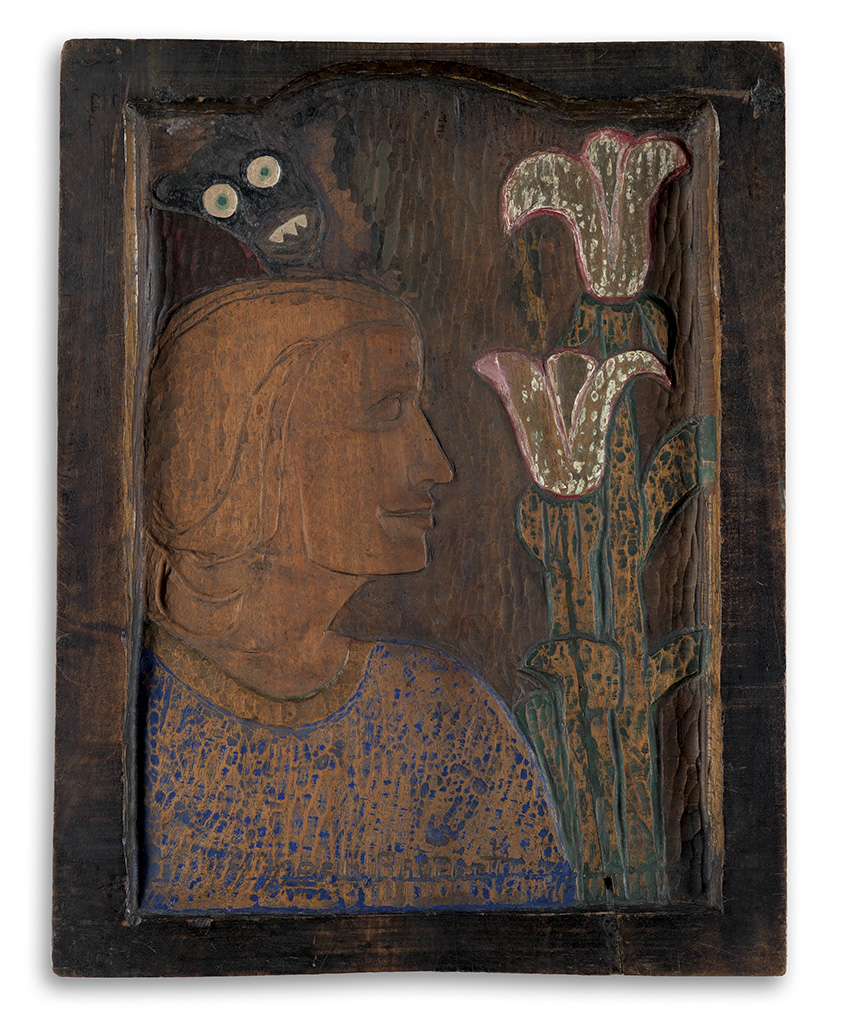