Provenance: gift from the artist; Marvin Lagunoff, New York and Toronto; thence by descent to the current owner, private collection.

Marvin Lagunoff (1923 - 2005) was a writer, producer and manager in the music and film industry. Part of a circle of politically-conscious artists and writers, Marvin Lagunoff and Norman Lewis became close friends in New York in the mid-1940s. Lagunoff toured Europe with Lewis in the spring of 1957 - visiting the south of France and Italy together. They remained close friends until Lewis' death in 1979. Lagunoff was the manager for popular rock and folk musicians including Simon & Garfunkel from 1964-68, and jazz saxophonist Eddie Harris from 1967-90. Lagunoff also wrote and produced martial arts/action movies in the early 1970s.

Birds In Flight is a significant and striking oil by Norman Lewis that has only recently been re-discovered, and will be publicly exhibited for the first time. This daring composition demonstrates Lewis' sophisticated approach to Abstract Expressionism - maintaining a balance between calligraphic line and brilliant touches of color, creating tension between the forms and the pictorial plane.

Norman Lewis developed his own voice in the early 1950s with such lyrical paintings, finding inspiration in the abstract patterns of nature. In 1950, he painted Birds, a more painterly precursor to the subject with swirling brushtrokes of color. That year, with his friend Ad Reinhardt, Lewis participated in the Artists' Sessions at Studio 35, three days of round-table discussions, moderated by Robert Motherwell, sculptor Richard Lippold and MoMA curator Alfred H. Barr, to define the relevant issues for Abstract Expressionism. Lewis was the only African-American artist to participate, and he broached issues of how artists were seen by their public "...making them aware of what we are doing." Lewis' abstraction reflected an awareness of his urban surroundings - echoing shapes and patterns seen in washing lines, tenement windows, storm clouds and birds flying over head. In Birds in Flight, Lewis uses an unusual gold metallic paint that is also found in the large abstraction Untitled, 1953, that was recently acquired by the Newark Museum. Lewis returned to an avian subject again that year with his Migrating Birds, which won the Popularity Prize at the prestigious Pittsburgh International Exhibition of Contemporary Painting at the Carnegie Institute in 1955. Fine pp. 196-197.
Set Alert for Similar Items 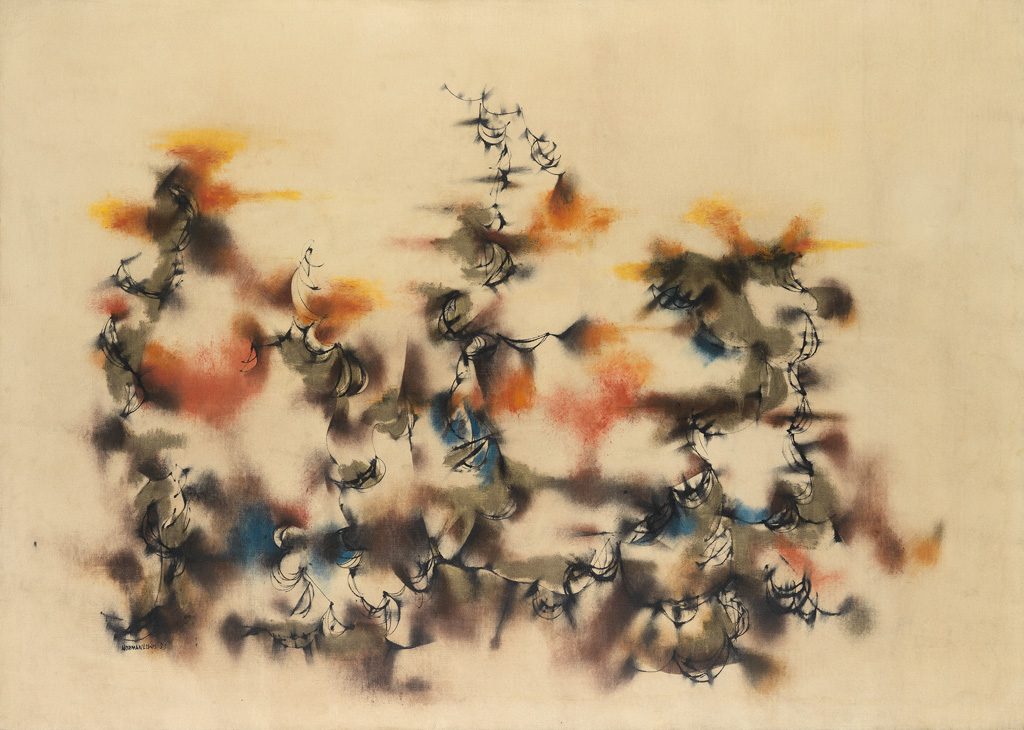