Exhibited: American Artists Paint the City, XXVIIIth Biennale, Venice, 1956, with the printed label "Biennale Internazionale di Venezia 1956", and a small fragment with the typed number "125th St." (the artist's studio address was on 125th Street in Harlem) on the upper stretcher bar verso; American Artists Paint the City, Art Institute of Chicago, January 17 - March 3, 1957. An abbreviated version of the Venice exhibition was shown in Chicago in conjunction with The 62nd Annual American Exhibition.

The important exhibition American Artists Paint the City was organized by Katharine Kuh, Curator of Modern Painting and Sculpture, The Art Institute of Chicago. Cathedral was sent by Willard Gallery to this celebrated group exhibition. The artists assembled by Katharine Kuh were a who's who of mid-century American Art - combining the likes of Edward Hopper, Georgia O'Keefe, and Ben Shahn with Stuart Davis, Willem De Kooning and Jackson Pollock. Norman Lewis and Jacob Lawrence were the only African-American artists included.

The re-discovery of Cathedral is momentous not just as the painting is an exceptional example of Norman Lewis' early painting, but it has one of the most impressive exhibition histories of any Lewis painting. Previously known only from black and white photographs, its location was long forgotten until the painting was rediscovered this past year in a Vermont estate, which had been its home for over sixty years.

Cathedral is at the pinnacle of Norman Lewis' first abstract period - describing the urban landscape of New York City within his "Black Paintings". Lewis would paint what he saw from his studio window or on walks at night in Harlem. Beginning with Tenement, 1948, Lewis found an abstract pattern in the colored rectangles of illuminated windows against the black ground of the darkened city. In City Night, 1949, Norman Lewis further condensed the abstraction of New York tenements into a denser, more organic grid that is less literal, and is bissected with lines representing clothes and power lines strung between buildings. By 1950, Lewis' Cathedral shows his painting evolving further abstraction with the soaring and dense vertical structure and colors evoking stained glass windows. The painting reflects Lewis' growing modernist approach to painting. In Cathedral, one can see the balance Lewis struck between non-objective and representative line - an investigation Lewis would continue throughout his paintings of the 1950s, including the figurative calligraphy of Congregation, also 1950, or the blurred vibration of Every Atom Glows: Electrons in Luminous Vibration, 1951.

By 1950, Lewis was a rapidly rising figure in the New York art scene. In March, he had his second solo exhibition at Willard Gallery, and was invited to the celebrated Artists' Sessions. These artist meetings, organized by Franz Kline and Willem De Kooning at Studio 35, united many figures of the New York School to discuss, define and defend the Abstract-Expressionist movement. Lewis, however, was not invited to the famous Irascibles photograph shoot published in Life magazine the following year, trumpeting the rise of the New York School. Only in these last few years has Norman Lewis begun to find its rightful place back amongst his more celebrated peers. Conwill pp. 32-33 and 36.
Set Alert for Similar Items 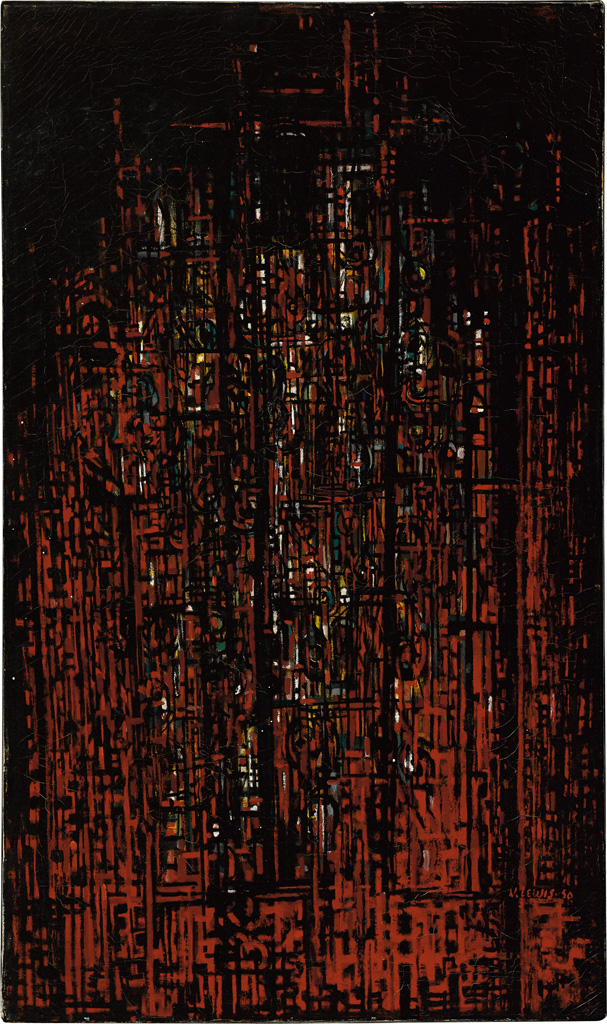