Exhibitions: Another impression in Black Printmakers and the WPA, Leslie King-Hammond, Lehman College Art Gallery, New York, 1989. Norman Lewis' WPA-era prints are extremely scarce; we have found only two other impressions of this print in private collections.

Born in Harlem, Norman Lewis found Augusta Savage's studio in the early 1930s. A motivated young artist, he was a student first of Savage in Harlem and later of Raphael Soyer at the John Reed Art School. Norman Lewis became an instructor himself at the famous Harlem Community Art Center during the WPA years of 1936-39. The Center was the meeting place for a whole generation of black artists, crucial to the development of black art in this century. Lewis, like his fellow instructors, Charles Alston, Ernest Crichlow, and Riva Helfond, produced many prints there during this period. His students and colleagues included Romare Bearden, Bob Blackburn and Ronald Joseph. Lewis went on to teach and work with Elizabeth Catlett and Charles White at the progressive George Washington Carver School, also in Harlem.
Set Alert for Similar Items 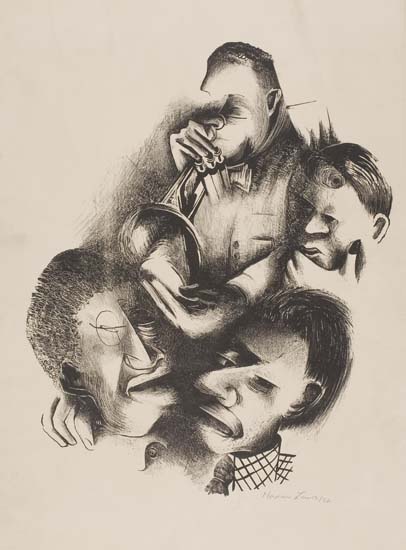