Promenade is the largest oil painting by Norman Lewis to come to auction since his untitled painting sold at Swann Galleries to the Museum of Fine Arts, Boston on October 7, 2008. This important canvas has never been exhibited, as it was acquired shortly after being painted in 1961.

This painting was part of an experimental series of Promenade paintings in which the artist experimented with the gradual abstraction of his calligraphic "ritual" figures, using the unpainted color of the linen canvas as the ground. Lewis soon infused the figures and their space with brighter colors in such compositions as Bonfire, 1962, in the collection of the Studio Museum in Harlem. This work, however, differs from his starker, more political works from the early 1960s, such as Redneck Rebirth, 1961, and Evening Rendezvous, 1962.
Set Alert for Similar Items 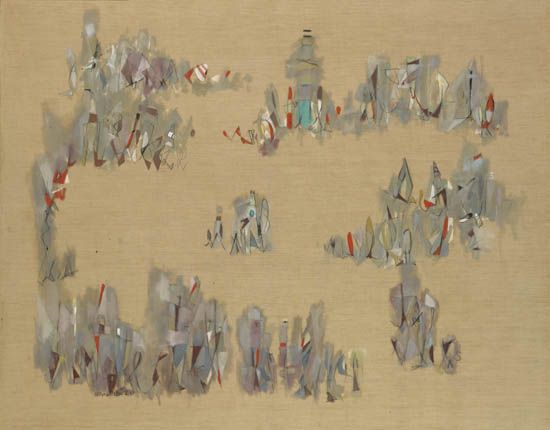