This intriguing, modernist composition is the earliest abstract painting by Norman Lewis to come to auction. 1945 is the first full year of his foray into abstraction, and his oil paintings from that year are very scarce. Norman Lewis was painting linear figurations with diagonals and curves, bisecting vertical lines and grids - abstracting figures in the city. This is what Norman Lewis saw on the New York sidewalks and subway platforms. Ruth Fine describes in her catalogue for his retrospective Procession: The Art of Norman Lewis the urban elements that Lewis used - "it is reasonable to believe that Lewis' Harlem surroundings provided sources for the geometric understructures...Suggestions of tiles and slats of wood, of windows and doors, of fire escape diagonals, all combine to affirm architecture as a subject." An earlier 1945 painting, dated January, Untitled (Subway), Michael Rosenfeld Gallery, shows us a row of figures before he further reduced them to line.

This painting resembles his early abstracted jazz figures from 1945-46 but is even more abstract in the figuration. Another 1945 painting that the artist was photographed painting is his geometric Composition I, in the Thomas Collection, Indianapolis Museum of Art. The painting that is closest in palette and design is the larger and horizontal Untitled, 1946, in the collection of the Studio Museum in Harlem, depicting a group of several of these figures. Fine pp. 30-31, 39, 44; Kleeblatt/Brown p. 30.
Set Alert for Similar Items 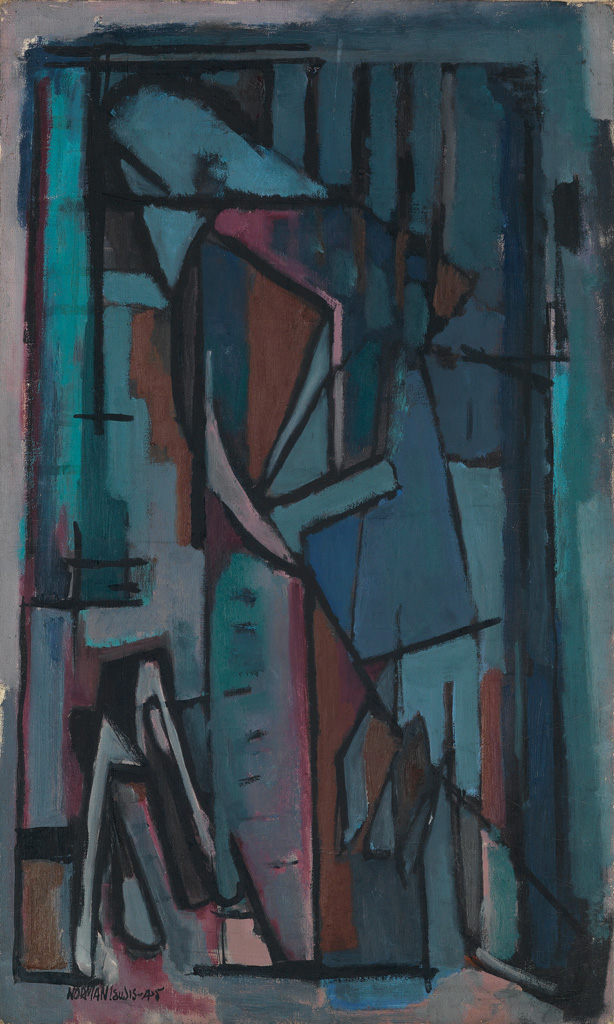