With--Untitled (Rural Landscape with Cars), watercolor, pen and ink, circa 1937-43, on the verso.

This gripping painting is one of the earliest figurative works by Norman Lewis to come to auction. By 1943, Lewis was deftly balancing his Social Realist subject matter with more modernist tendencies toward abstraction. This double-sided work on paper also reflects the two sides of Norman Lewis's painting before and after the WPA period--with a scene of the industrial North on the recto and the rural South on the verso. Norman Lewis taught briefly at North Carolina A&T State University and at Bennett College in Greensboro, NC in 1937. But he soon returned back to New York, unable to tolerate the segregation of the South.

In 1943, Norman Lewis was teaching painting at the new George Washington Carver School in Harlem, where he joined an impressive staff, including Ernest Crichlow (painting), Charles White (drawing), and Elizabeth Catlett (sculpture). Norman Lewis painted in a Social Realist manner throughout his WPA days, according to Bearden and Henderson, "depicting and protesting the calamities in the life of many poor black people: evictions, breadlines, lynchings, police brutality and poor housing." Though he did occassionally show his lighter side in 1943, with such paintings as Harlem Jazz Jamboree, this was the last year Norman Lewis worked with Social Realist subjects before moving to abstraction after World War II. Bearden/Henderson p. 318. 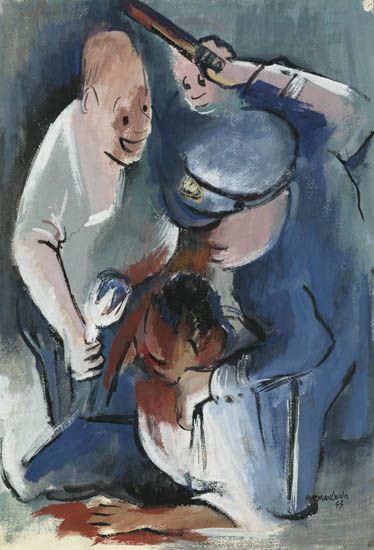