With an illustrious career that spanned the Harlem Renaissance and the WPA, Norman Lewis was an isolated but still emerging figure in the New York art scene after World War II. He was one of the few African-American artists who had completely embraced the new abstract idiom. His paintings were both linear and atmospheric, with the type of figure/ground relationships that were championed by the critic Harold Rosenberg. Unlike his contemporaries, Lewis painted thinly and with a dry brush technique to evoke visual depth, natural forms and the surface of the canvas.

By 1955, his fellow painters and followers of Abstract Expressionism had achieved international prominence. Despite winning the important Carnegie Institute prize for painting that year, Norman Lewis, for the most part, was not included in the success of his contemporaries. He had several one-person exhibitions at the Willard Gallery, and was a frequent participant of Studio 35, but was not celebrated as part of the Abstract Expressionist movement.

This large painting displays the mastery of Abstract Expressionism found in his mid-careeer - incorporating his lyrical, suggestive mark-making within shifting, painterly passages of color. The tension of his earlier work between the drawing and painting is maintained in a more organic cohesiveness. It shares the same subtle crescent silhouette found in Harlem Turns White, 1955, with the crescendo of vertical forms in his other urban inspired works. By 1960, his paintings with titles like Alabama and Evening Rendezvous, despite a brighter palette, often reflected the darker times of the Civil Rights movement, his own personal struggles and a political awareness that was manifested in his later involvement in the Spiral Group. Lewis frequently used the title to convey a degree of content to his work. In this case, without it, we are free to make our own associations. Bearden/Henderson, p. 325 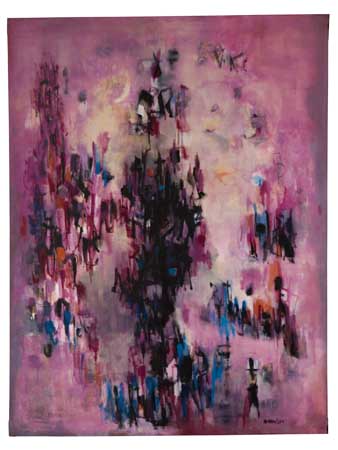