Provenance: acquired directly from the artist, New York; private collection, Chicago; thence by descent to the current owners. The original owner, now deceased, took private art lessons from Norman Lewis in Harlem as a young woman. They remained life-long friends after she moved to Chicago. According to the family, she visited him in New York in the late 1950s with the desire to acquire an oil painting for herself. She bought this large painting out of his studio.

This important mid-century painting is not only a truly exceptional example of Norman Lewis's painting, but an exciting discovery. This previously unrecorded painting is one of the most significant 1950s calligraphic figure paintings by Norman Lewis that we have seen, and yet it has never been publicly exhibited.

By 1957, Norman Lewis had gained national recognition, having had a series of well-received solo exhibitions at the Marian Willard Gallery, New York. His famous Migrating Birds, 1953, had won the Carnegie International Award in Painting in 1955, making him the first African-American artist to receive this prestigious prize. In 1956, Lewis was selected to represent the United States in American Artists Paint the City, an exhibition of 46 works by 36 artists in the American pavilion during the 28th Venice Biennale. Lewis joined fellow Willard Gallery artists Lionel Feininger and Mark Tobey; he and Jacob Lawrence were the only African-American artists included. He showed at the Willard Galley again in February of 1957, his sixth solo exhibition there since 1949, then spent several months traveling--visiting France, Italy, Spain and North Africa.

In this painting, the artist continues his investigation of the "ritual" calligraphic figures that he began as early as 1950, while simultaneously shifting towards color field painting. This intense blue canvas reveals both fiery and cool undertones, while simultaneously obscuring and revealing a large, dense composition of figures. The owner's family recalls Lewis's inspiration was from a Moroccan experience; Lewis described the scene of a city after sunset, when little charcoal fires were lit and everyone prepared the evening meal. This work is similar with its multitude of figures to other large promenade paintings like Carnival, circa 1957, collection of the late Albert Murray, and Untitled (Tournament), late 1950s, the Sheldon Museum, Lincoln, NE. However, this work's bright palette, detail and clarity distinguishes it from other paintings of the period. Through the 1950s, Lewis navigated between Abstract Expressionism and elements of figuration in his studio. This canvas reveals his continued attention to the figure in his painting--with wonderfully expressive characterizations, and suggests a greater involvement of the artist in the balancing act between his painting tendencies. The artist wrote about the diverse forces that shaped his work in a forward to his 1954 exhibition: 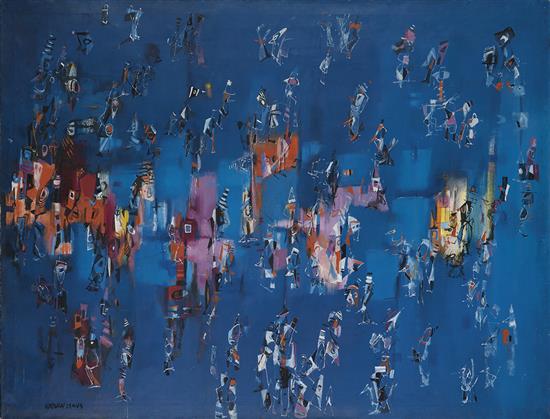