Provenance: gift from the artist; private collection, New York; thence by descent to the current owner.

This masterful mid-century composition is a newly discovered and important example of Norman Lewis's painting. This previously unrecorded painting reveals yet another dimension to his late 1950s body of abstraction.

Norman Lewis had gained national recognition by 1958, having had a series of well-received solo exhibitions at the Marian Willard Gallery, New York. His famous Migrating Birds, 1953, had won the Carnegie International Award in Painting in 1955, making him the first African-American artist to receive this prestigious prize. In 1956, Lewis was selected to represent the United States in American Artists Paint the City, an exhibition of 46 works by 36 artists in the American pavilion during the 28th Venice Biennale. Lewis joined fellow Willard Gallery artists Lionel Feininger and Mark Tobey; he and Jacob Lawrence were the only African-American artists included. He showed at the Willard Gallery again in February of 1957, his sixth solo exhibition there since 1949, then spent several months traveling--visiting France, Italy, Spain and North Africa.

In this remarkable painting, Norman Lewis continues his investigation of the "ritual" figures while moving further towards color field painting. This canvas is an orchestration in tonal color and form. Here Norman Lewis both reveals and obscures a large, dense composition of his figures with a limited palette by deftly balancing the warm beige color of the linen canvas with passages of a warmly toned white. The figures are comprised of modernist shapes, without his calligraphic line. These elements all suggest that Lewis's inspiration came from his European experience. Lewis appears to incorporate the Surrealism of Pablo Picasso and Joan Miró that he might of encountered in Barcelona. This work is similar with its multitude of figures to other large promenade paintings like Carnival, circa 1957, collection of the late Albert Murray, and Untitled (Tournament), also late 1950s, the Sheldon Museum, Lincoln, NE. However, this work's palette and overall composition relates it more closely to Harlems Turns White, 1955. Through the 1950s, Lewis navigated between Abstract Expressionism and elements of figuration in his studio. The artist wrote about the diverse forces that shaped his work in a forward to his 1954 exhibition: 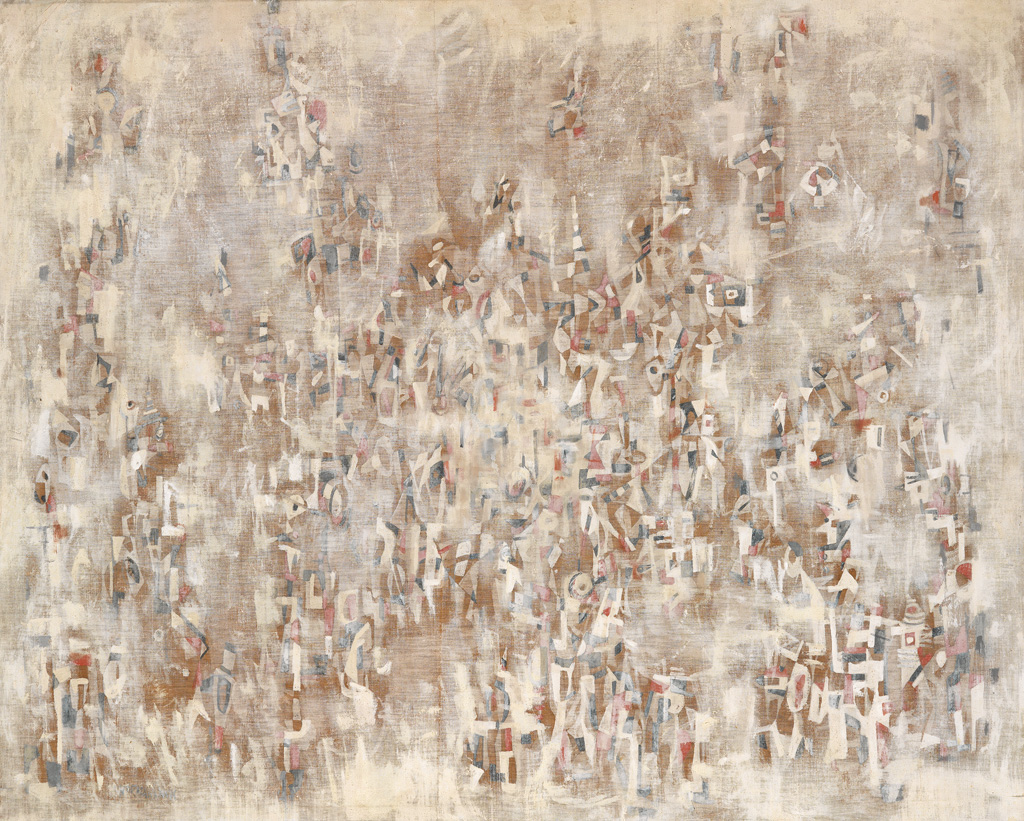