Price Realized: $ 23,000
Price Realized: $ 27,600
?Final Price Realized includes Buyer’s Premium added to Hammer Price
Estimate: $ 20,000 - $ 30,000
PAUL COLIN (1892-1986) LE TUMULTE NOIR. Portfolio with 22 plates. 1927.
18 1/2x12 1/2 inches, 47x29 cm.
Condition varies, generally A: minor soiling and abrasions on cover. Paper.
Le Tumulte Noir is a portfolio consisting of 42 original lithographs by Colin, all hand-colored in pochoir, an elaborate procedure involving stencils for each different color. An advertisement in the rare program from the Bal Negre announces that this album was designed for and sold at this special one-night event, which was Colin's brainchild and tribute to the "black craze" of Paris. Only 500 copies were printed, and each portfolio includes a facsimile of a letter of introduction written by Josephine Baker, a preface by Rip (the satirist George Thenon), and a sort of calligrame in the shape of a palm tree by Colin. The album is divided into two parts, the first one is dedicated to Josephine Baker and the black musicians and dancers. It is exquisitely stylized, drawn with a free hand, full of wit, movement, and invention is showing Paul Colin at his very best. The second part is a satire of Paris under the spell of the Charleston rage. Following in the steps, and very much in the style, of Sem, Colin is cartooning in funny and sometimes cruel satire, the Parisian music hall stars of the moment: Mistinguett, Maurice Chevalier, Cecile Sorel, the Dolly Sisters, as well as the chansonniers Rip and Saint-Granier, a cubist Jean Borlin of the Ballet Suedois and even the tennis champion Suzanne Lenghen. Le Tumulte Noir is the best album depicting Paris in the throes of the Charleston craze. It is becoming harder and harder to find this portfolio complete (in addition to the edition of 500, 10 copies were printed on Japan paper and 10 others on Madagascar Vellum), as most existing copies have been broken up.http://www.unil.ch/webdav/site/angl/shared/pdf/Paris_Trip/article_Baker.pdf
Set Alert for Similar Items 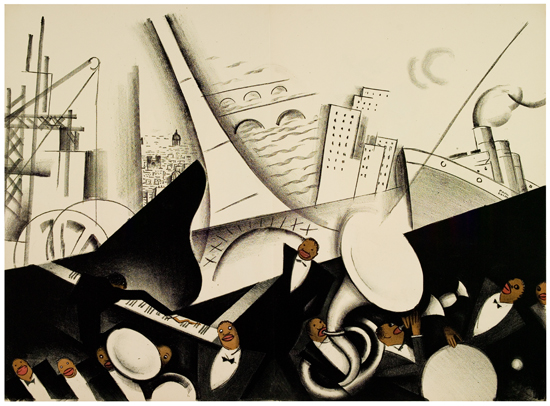