Archive of 101 costume designs and related correspondence for the play "Kassa."
14 brown paper folders separating contents by scene. Each folder contains a lined, folded notebook sheet with a notary seal on cover and occasional fabric swatches for the realized costumes; contents hold Anderson's costume drawings in watercolor, ink, and wash, the versos contain notations and signatures used in English legal court proceedings over the dispute between Anderson and Kassa's playwright, John Luther Long (see note). Average measurement of drawings is 254x180 mm; 10x7 1/4 inches; nearly all bear Anderson's monogram. Lined notebook sheets measure 12 3/4x8 inches. Presumed to be complete.
A fascinating archive of costume designs for a grand-scale, early 20th century stage production. Kassa was an Edwardian-era dramatization of the story of "the broken butterfly" from the ancient Hunnish book. Its author, John Luther Long, was a collaborator of the great theatrical producer and playwright David Belasco, who first adapted Long's short story "Madame Butterfly" to the stage before Puccini adopted the libretto for what became his most famous opera. Kassa's leading lady was Mrs. Leslie Carter, among the greatest actresses of her generation, nicknamed "The American Sarah Bernhardt." The play premiered at the New National Theatre in Washington, D. C. on January 4, 1909 before traveling north to Broadway's Liberty Theatre for a short but well-attended run.

Anderson was a prolific and successful English stage designer of opera and musical comedies, best known for his long tenures with the Savoy Operas, D'Oyly Carte Opera Company, and His Majesty's Theatre. Although focused on musical theatre professionally, socially Anderson also enjoyed the company of writers, artists and politicians, including Hamilton Aidé, Lord Ronald Gower and Hugh Walpole with whom he was closely associated. While Anderson's work was more rooted in 19th-century tradition, his work can be seen as an important forerunner of the more famous Avant-Garde stage designers Leon Bakst, Claude Lovat Fraser, and Edward Gordon Craig. Kassa's massive eighty-five member cast kept Anderson busy and the sheer number of designs in this archive display his dedication to the stylistic details demanded of the scenes and storyline. The attention to color, fabrics and finishes, historical style, accessories, and harmony of group attire are exquisite, each drawing enriched with his copious notes.

Due to a disagreement regarding payment and use of the designs, legal action was brought by Anderson against Long for non-payment of these designs. The archive contains a few documents relating to this case including: a series of seven Typed Letters Signed by Long in 1908 from Philadelphia, relating to the staging and production of Kassa, and stating that Mrs. Leslie Carter was responsible for payment to Anderson for the costumes, a Manuscript Letter Signed by Anderson to Carter, 1909, and the original mailing envelope with same notary seals as the folders, containing those contents, sent by Henry F. Walton, Esq. to the Court of Common Please in Philadelphia, stamped September 16, 1912.
Set Alert for Similar Items 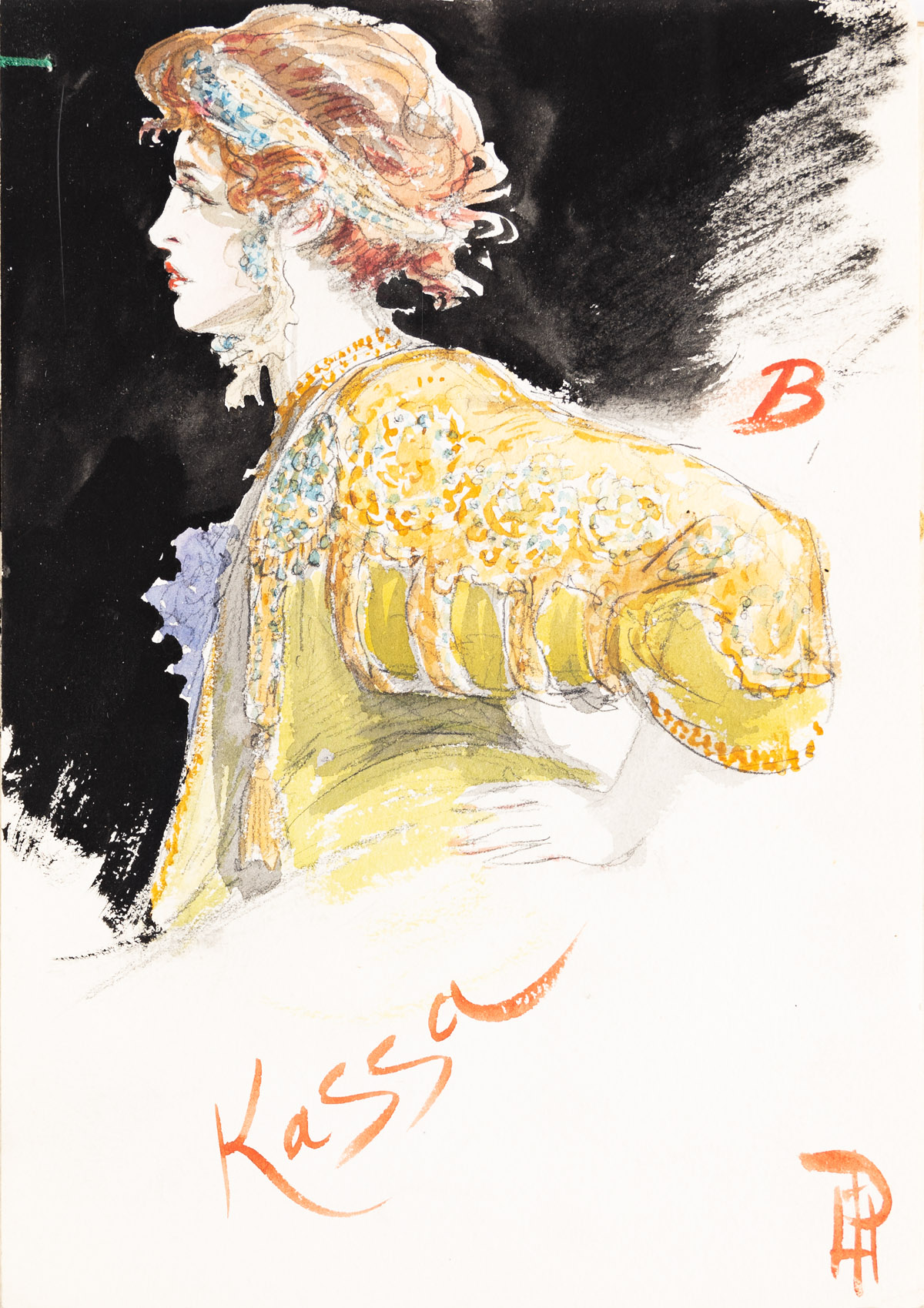 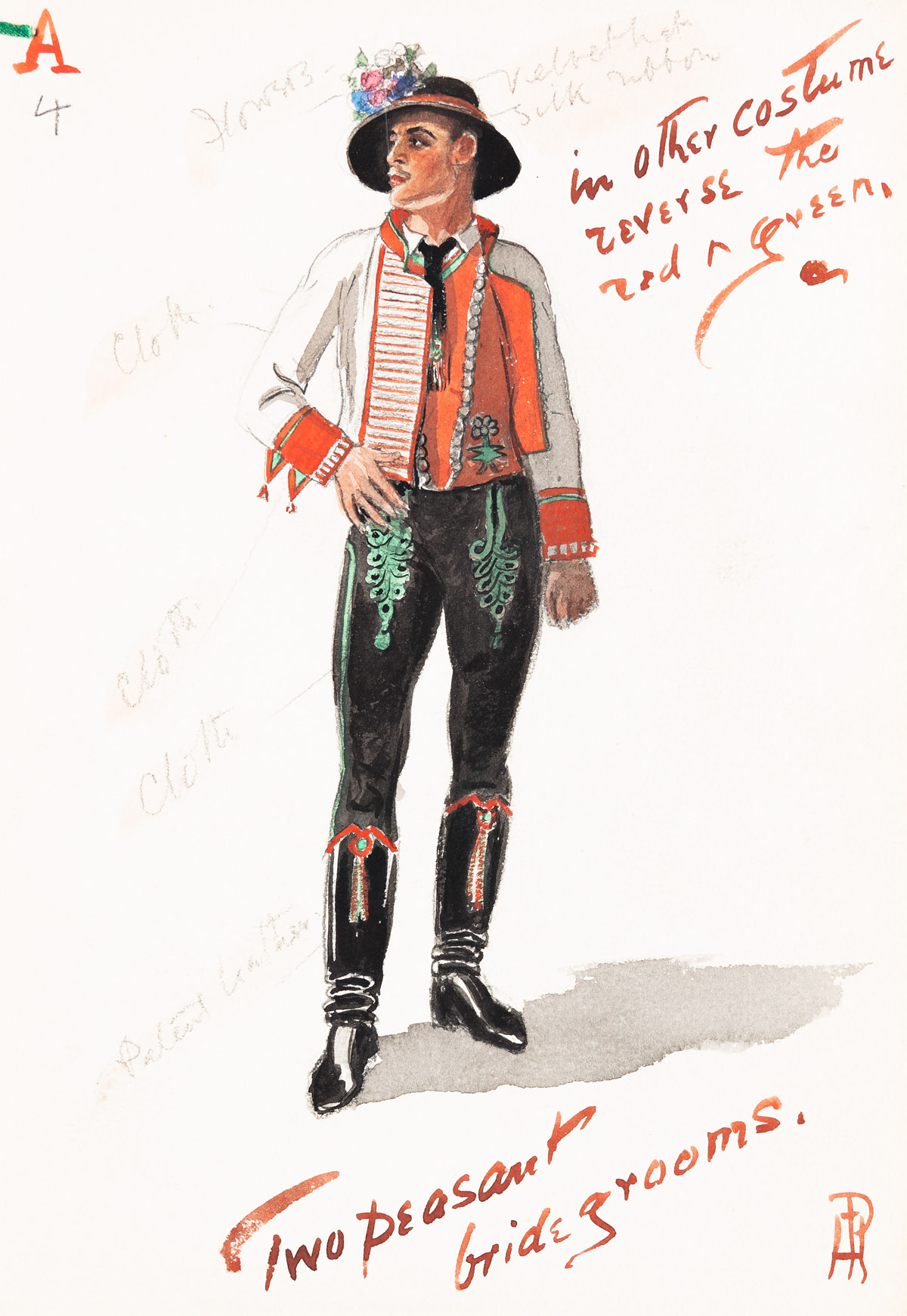