Price Realized: $ 9,000
Price Realized: $ 11,250
?Final Price Realized includes Buyer’s Premium added to Hammer Price
Estimate: $ 12,000 - $ 18,000
"REMEMBER DEGAS . . . MAKE COPIES OF . . . PAINTINGS IN THE NATIONAL GALLERY" PISSARRO, CAMILLE. Illustrated Autograph Letter Signed, "C Pissarro," to his son ("My dear Lucien"), in French, describing a work he has begun [View of Rouen or Lacroix Island at Rouen, (both 1883)?], encouraging him to take advantage of his time in London to copy works in the National Gallery, describing an encounter with a man who asked whether his young friend's painting demonstrated talent and explaining that talent is not enough for success. The illustration, a small ink sketch resembling his 1883 painting, View of Rouen, on upper half of third page. 5 pages, 8vo, oblong sheet with two vertical folds forming six pages; scattered expert repairs; matted in double-sided frame. Rouen, October 11, 1883
Set Alert for Similar Items

"I am hard at work . . . . I began a work the motif of which is the river bank in the direction of St. Paul's Church. Looking towards Rouen I have before me all the houses on the quays lighted by the morning sun, in the background the stone bridge, to the left the island with its houses, factories, boats, launches, to the right a mass of pinnaces of all colors.
"In the evening I work at Le Cours-la-Reine on the motif you know about. . . . Yesterday, not having the sun, I began another work on the same motif in grey weather, only I looked more to the right.
". . . I have a room on the street. I shall start on a view of the street in fog for it has been foggy every morning until eleven o'clock-noon. It should be interesting, the square in the fog, the tramways, the goings and comings.
"Until next time, then . . . work with ardor. You know that to succeed one must work hard. . . . Draw more and more often--remember Degas. If you want to make copies of the primitives, there are plenty of paintings in the National Gallery, there are the Egyptians, the Holbeins. Paint the figure; and don't excuse weakness by the fear of drawing freely in public.
"Yesterday, . . . a little rentier pestered me . . . . [He] spoke to me about a young man of nineteen, from this neighborhood, . . . . [who] is full of ardor and has invincible faith . . . and he is going to Paris . . . . So I was asked to go and look at a portrait done by this young man. Another painter who will be swallowed up in Paris, or is he strong enough to resist? has he talent? Pardon me, talent is not what is required, everybody has talent nowadays. . . .
"Here comes the sun, I must leave you until next time.
Published in Pissarro, Letters to His Son Lucien, ed. John Rewald (New York: Pantheon, 1943), 40-42.
Provenance: Lucien Pissarro, the artist's eldest son, London; thence by gift to Mr. and Mrs. Paul M. Hirschland, New York, acquired with the assistance of their friend John Rewald (the Hirschlands owned the second view of Rouen oil painting discussed in this letter); thence by descent to the current owner. Lucien Pissarro and his wife Esther remained close friends with the Hirschlands, throughout World War II they sent frequent care packages to the Pissarros. 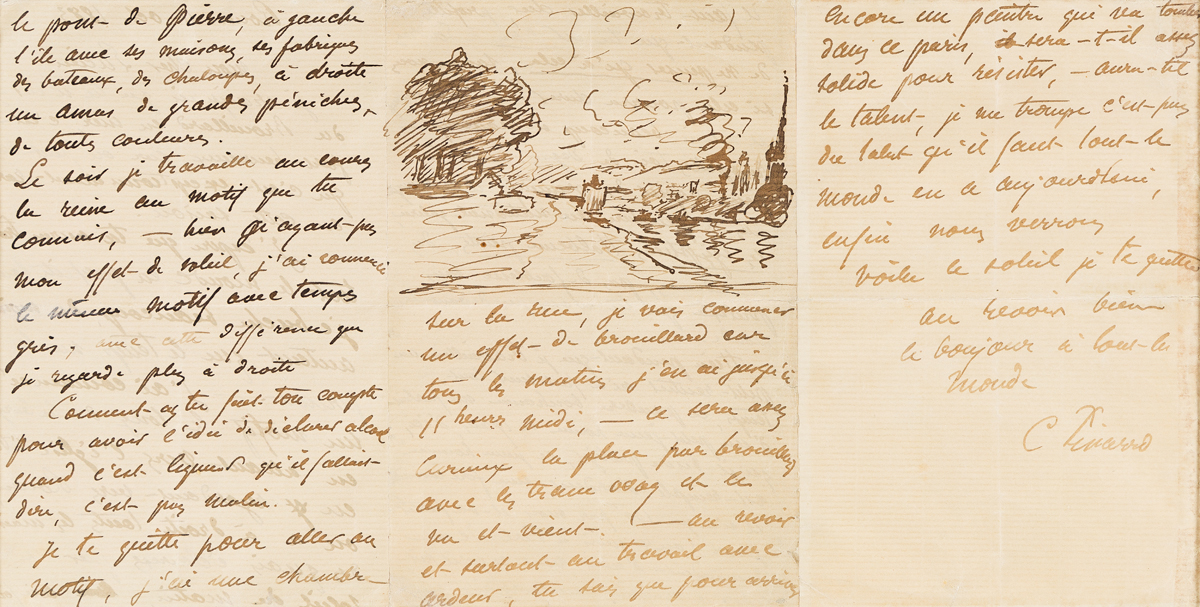