Etching, 1633. 135x105 mm; 5 3/8x4 1/8 inches, narrow to thread margins. Biörklund's third state (of 3); Usticke's second state (e) (of 5), before the Watelet rework and with the mouth still bow-shaped; White and Boon's second state (of 2); New Hollstein undescribed intermediate state between the second and third states (of 5). Partial Strasburg Lily with the letter W and number 4 watermark (Ash/Fletcher 36). Ex-collection Siegfried Barden (Lugt 2756 and 218, verso). A brilliant, richly-inked and early impression with no sign of wear, with crisp, partially inky plate edges, with the patch of tone slightly above and to the left of the "R" in the signature and with touches of burr in the curls of hair just beneath the cap at the right, consistent with the earliest impressions of this subject.

Rembrandt etched some 30 self portraits, with 27 singular images of himself and several others of himself in different guises or grouped with other portrait studies (see also lots 347, 350, 352-354, 375, 381, 382, 394, 400 and 404). This self portrait, at the age of 27, created two years after he had moved to Amsterdam from Leyden to establish himself as a successful (and independent) artist, and months before he married Saskia van Uylenburgh, is perhaps Rembrandt's most introspective self portrait. The dark shading covering much of his face (which rapidly disappears in later impressions), the deep-set eyes and his quiet, hunched pose lend him an almost shy, reserved appearance, which is markedly different from the proud, bright, frontal poses of his self portraits from the mid-to late-1630s. Bartsch 17; Biörklund 33-G; Hollstein (White and Boon) 17.
Set Alert for Similar Items 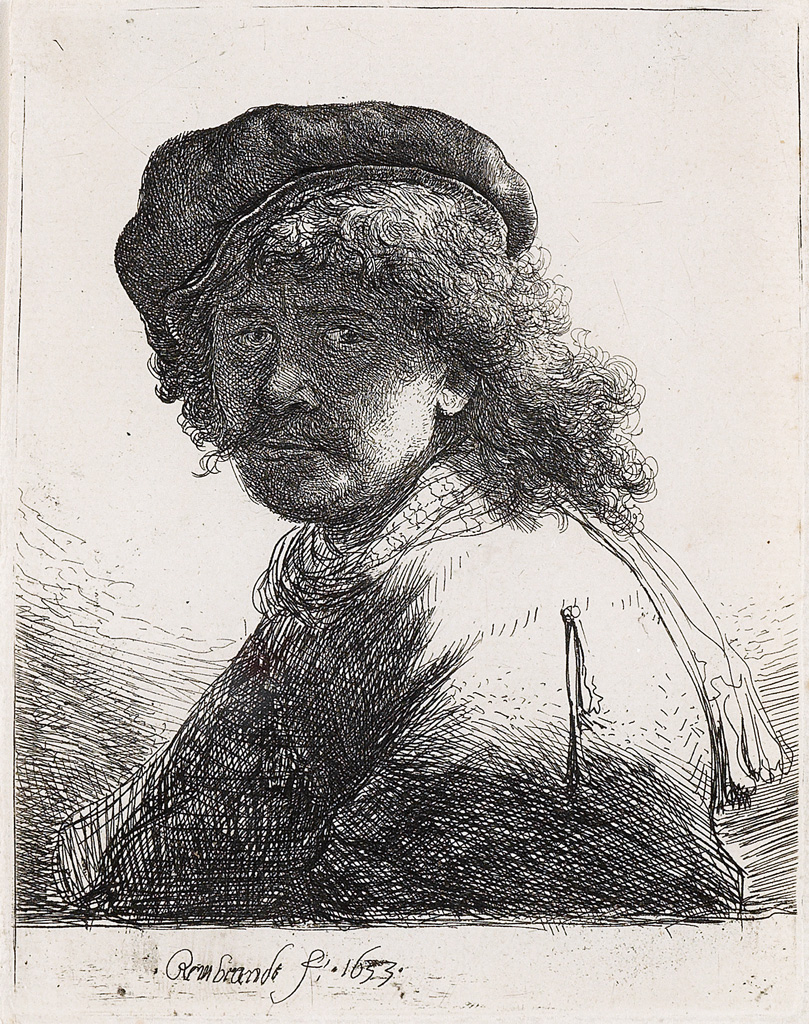