Hamilton (1922-2011) was born in Pimlico, London, and remained there for his artistic training with two stints at the venerated Royal Academy of Arts, from which he was expelled in 1946. He ultimately studied at the Slade School of Art until 1951, when his career took off beginning with the exhibition "Growth and Form" at the Institute of Contemporary Arts. In 1953 he joined the Fine Arts faculty at the University of Newcastle upon Tyne, where he taught until 1966.

Hamilton became a leading artist in the Independent Group in the 1950s, which was instrumental in shaping Pop art in Britain. His collage Just what was it that made yesterday's homes so different, so appealing? (now at the Kunsthalle Tübingen), which he produced for the group's 1956 exhibition "This is Tomorrow" at the Whitechapel Gallery, is credited as one of the earliest examples of Pop art. He used American magazines, from which he appropriated images of everyday objects and popular culture, as source material for the collage. Hamilton maintained these elements as a theme through the remainder of his career.

Hamilton created My Marilyn by photographing found images from the November 1962 issue of Town magazine which hit newsstands shortly after the actress's tragic death. The magazine illustrated a contact sheet of photos taken by George Barris, which had been annotated by Marilyn herself to mark which images were fit to publish and where she deemed edits were necessary. Hamilton experimented greatly with his photographs to achieve the final effect, manipulating both positive and negative photographs to be incorporated into his composition. He began with a collage with hand additions in paint, My Marilyn (paste-up), 1964 (now in the Museum Ludwig, Cologne) and a painting the following year (now at the Stadt Aachen, Ludwig Forum für Internationale Kunst), before working on the screenprint during his time at University of Newcastle upon Tyne. He borrowed screens from the textile department to create the initial proofs since there was no screenprinting studio at the university and due to this resourcefulness was unable to create a satisfactory product until he turned to Kelpra Studio, London, for assistance.

The print is a clear rebuttal to Andy Warhol, who contemporaneously created his iconic Marilyn images in the 1960s (see lot 204). In Hamilton's work, though, the subject has a hint of agency in the finished product. Hamilton wrote of the series, "There is a fortuitous narcissism to be seen for the negating cross is also the childish symbol for a kiss; but the violent obliteration of her own image has a self-destructive implication that made her death all the more poignant. My Marilyn starts with her signs and elaborates the possibilities these suggest." Lullin 59.
Set Alert for Similar Items 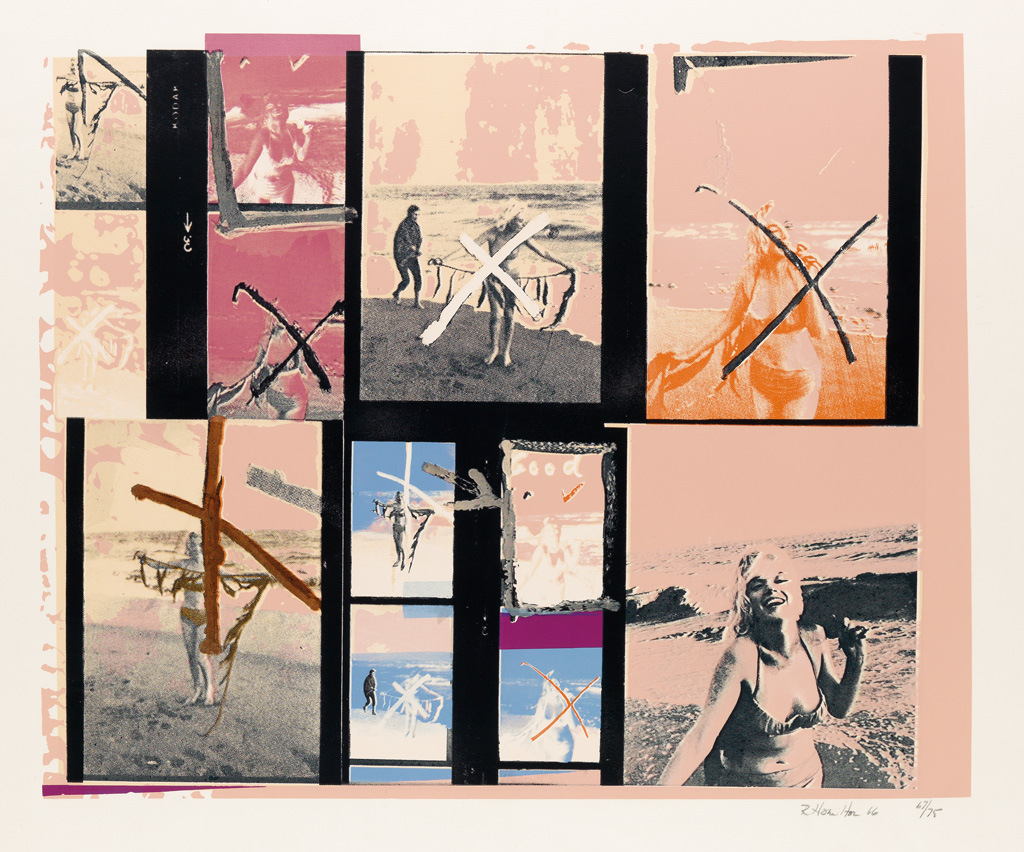