We have found only two records of this print, one from the collection of Reba and Dave Williams that was donated to the Metropolitan Museum of Art, New York, and one in the collection of Riva Helfond, New York, that was exhibited in New York/Chicago WPA and the Black Artist, Studio Museum in Harlem, New York, November 1 - January 8, 1978. There are records of only 5 other lithographs by Blackburn from this WPA period.

Blackburn was 19 years old when he printed this lithograph at the Harlem Community Art Center where he was taught by Riva Helfond. Harlem artists Charles Alston, Augusta Savage and James Lesesne Wells also taught Blackburn from a young age. At 13, he began studying at the 135th Street Branch of the New York Public Library and the Harlem YMCA. At DeWitt Clinton High School, he contributed numerous drawings, stories and poetry to the school's literary magazine, The Magpie - his earliest lithographs Refugees and Coal Shute II were printed in a June 1938 issue. He also participated in the Harlem Arts Workshop, the Uptown Art Laboratory and the famous "306" Harlem arts group.
Set Alert for Similar Items 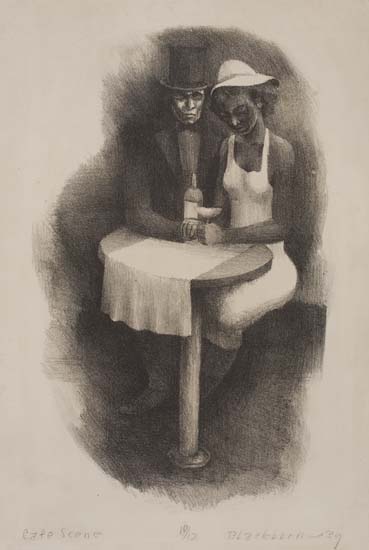