Provenance: private Georgia collection, acquired in the 1960s or 1970s; thence by descent to the current owner.

Young America is both a dramatic and an unusual painting by Robert S. Duncanson, which was just recently rediscovered. Few figurative paintings from the early part of his career are known, let alone have come to auction. Before becoming an acclaimed landscape painter, Duncanson made some historical paintings in addition to typical genre commissions. Joseph D. Ketner II describes how Young America is "a rare, early example by Robert S. Duncanson from the first decade of his professional career, when he was traveling regularly between Cincinnati and Detroit painting portraits, still lifes, historical and 'fancy' pictures on commission." Patriotic imagery is an unusual subject for a commission, as it is usually found in popular printed material. Duncanson had adapted some common themes found in prints in his paintings The Drunkard's Plight, 1845, Detroit Institute of Arts, and Mary Magdalene, 1846, private collection.

This blonde young man and his battle scene differs from the typical representation of a youthful embodiment of nationalist spirit. This specificity makes the figure more than just an American symbol--Ketner suggests that the young man may be a son sent off to war whose family commissioned this likeness. The heroic figure of Young America, raising both his sword and the American flag, according to Ketner, is "possibly the earliest patriotic painting of the Mexican-American war period." Young America also shows the imagination and developing talent of a young American artist. This exciting discovery adds to the growing appreciation and understanding of this important 19th century painter's work.

We would like to thank Joseph D. Ketner II, curator-in-residence at Emerson College and noted Robert S. Duncanson expert, for his examination report and essay confirming the work. The painting is being sold with his report, dated January 5, 2012.
Set Alert for Similar Items 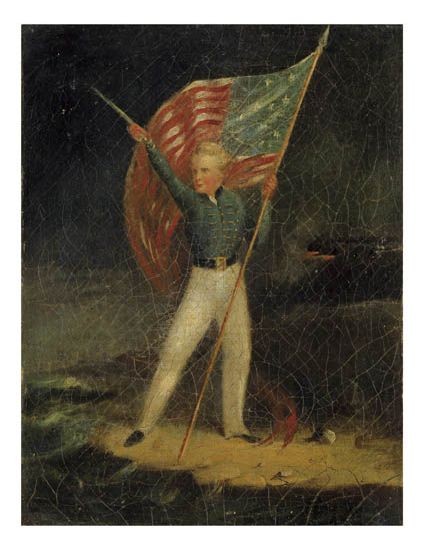