Benjamin Wolf was a writer, the art critc for Art Digest and an early champion of Romare Bearden. Wolf reviewed several of Bearden's first gallery exhibitions, and owned two other early paintings including the 1945 painting, The Manger, included in Bearden's first solo show at the Kootz Gallery, his first exhibition at a New York gallery. The Museum of Modern Art acquired Bearden's watercolor, He Is Arisen from the same exhibition.

Exhibited: Modern Religious Paintings, Durand-Ruel Galleries, New York, January 9 - February 2, 1946; Newman Galleries, Philadelphia, with the label on the frame back. The Annunciation was part of an exhibition at Durand-Ruel Galleries of 24 international modern artists including Max Beckmann's Descent from the Cross, Georges Rouault's Christ in Profile, Salvador Dali's Nativity, and other works by Milton Avery, Pablo Picasso, Marc Chagall and Max Weber.

This striking, modernist painting is an important oil painting in the early career of Romare Bearden. The Annunciation is a very scarce, large oil on canvas from a period in which Bearden is known for working primarily on paper. Having enjoyed incredible success, both critically and commerically with his first exhibition at the Kootz Gallery in 1945, Romare Bearden's career was launched. He also further extended his exploration of Old Masters or Renaissance depictions of religious subjects, deftly synthesizing them into Cubism and abstraction.

The Annunciation shows how Bearden's work quickly continued to evolve after his first solo exhibiton. Myron Schwartzman describes it in length, in terms of both Romare Bearden's historical appreciation and his further modernist development in the late 1940s. He states how "Bearden's handling of the formality of the picture plane...is a clear nod to the direction of the Cubists. His admiration of Matisse is evident in the linear rhythms that create a unified ornament of the entire composition, moving from the robes of the angel and Mary to the column." Schwartzman also compares his composition to Duccio's Annunciation of the Death of the Virgin, circa 1308-11, from the Maesta Altar. Schwartzman pp. 137-139.
Set Alert for Similar Items 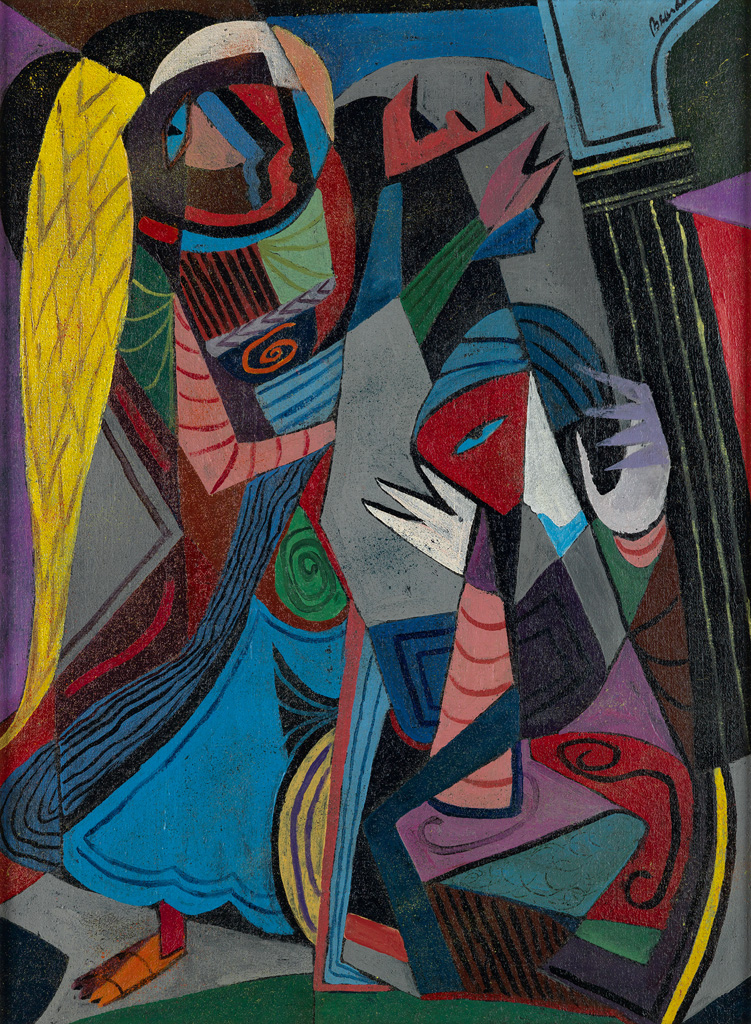