Harry Henderson spoke about Bearden's interest in Abstract Expressionism in an interview in 1989: "When Abstract Expressionism came up, Romy was very excited. But he found problems in that these artists worked purely from feeling and determined things in a subjective sense. Romy could not react subjectively to his feelings. He found a rationale by studying Zen philosophy. His works were always serene and lacked the tremendous physical involvement employed by the Abstract Expressionists," Gelburd/Rosenberg p. 40. Sharon Patton in Memory and Metaphor, The Art of Romare Bearden 1940-1987 identifies this approach to abstract painting, achieving in several large-scale paintings what Henderson terms "a mystical elegance," Bearden produced poetic, serene abstract art. In accordance with Zen principles, his approach to painting was intuitive. She further describes the influence of Zen principles and Chinese painting in this painting with its assymmetrical composition and the use of a diagonally placed element. The title, provided by Bearden's wife, Nanette Rohan, is a translation of a famous line from the great Chinese T'ang dynasty poet Tu Fu.
Set Alert for Similar Items 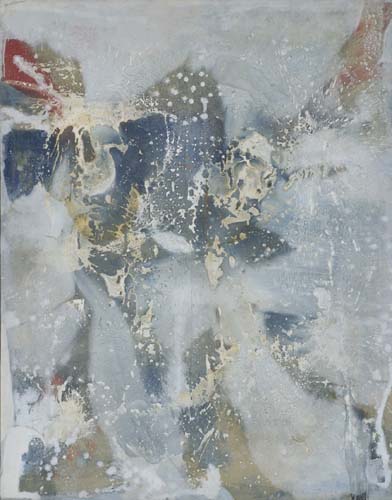