20 March 1906: ". . . I had not prepared the speech at all, but I had been reading with great indignation the Cosmopolitan Magazine and the news of the way certain labor unions were subscribing for the defense of those Western Federation of Miners people whose organization certainly, if not they themselves personally, were accessories to murder before the fact in the case of Governor Steunenberg. As you know, my dear Judge, I will go to the limit in enforcing the law against the wealthiest man or the wealthiest corporation if I think he or it has done wrong; but my whole soul revolts at a campaign of foul slander waged against men . . . because they have succeeded in business; . . . ."
26 April 1906: ". . . I utterly and radically disagree with you in what you say about large fortunes. I wish it were in my power to devise some scheme to make it increasingly difficult to heap them up beyond a certain amount. . . . [L]et us at least prevent their being bequeathed after death, or given . . . to any one man in excessive amount.
"You and my other capitalist friends, on one side, shy off at what I say against them. Have you seen the frantic articles against me by [Eugene V.] Debs and the socialists of the bomb-throwing persuasion, on the other side, because of what I said in my speech in reference to those who, in effect, advocate murder?"
5 November 1906: ". . . Of course Root and I went over his speech word by word, and where he said he was authorized to speak he meant just exactly that--just exactly that he was authorized to use the very words he did. What a corker Root is, isn't he?"
With--Three typed letters from Roosevelt's personal secretary William Loeb Jr. to Gary, thanking for his letter or a gift, or sending a copy of a speech [not present]. Each 1 page, 8vo, White House stationery. Washington, 23 June; 6 December 1906; 16 March 1907 • Retained drafts of 20 letters from Gary to Roosevelt or Leob. Together 34 pages, 4to, most onionskin paper. New York, 1906-08.
On March 17, 1906, Roosevelt delivered an informal address at a dinner organized by House Speaker Joseph Gurney Cannon for the Gridiron Club in Washington. In this speech, Roosevelt coined the term "muckraker" by comparing Bunyan's image from Pilgrim's Progress of a man fixated on his "muck rake" to a journalist who is unduly preoccupied with negative reportage. Although the speech was never published, Roosevelt delivered another soon after employing the same theme ('Address of President Roosevelt at the Laying of the Corner Stone of the Office Building of the House of Representatives Saturday, April 14, 1906'), published by the Government Printing Office that year. Much of the discussion in these letters concerns views of Roosevelt that can be found expressed in statements such as the following, taken from the later speech: "The wealthy man who exults because there is a failure of justice in the effort to bring some trust magnate to an account for his misdeeds is as bad as, and no worse than, the so-called labor leader who clamorously strives to excite a foul class feeling on behalf of some other labor leader who is implicated in murder." 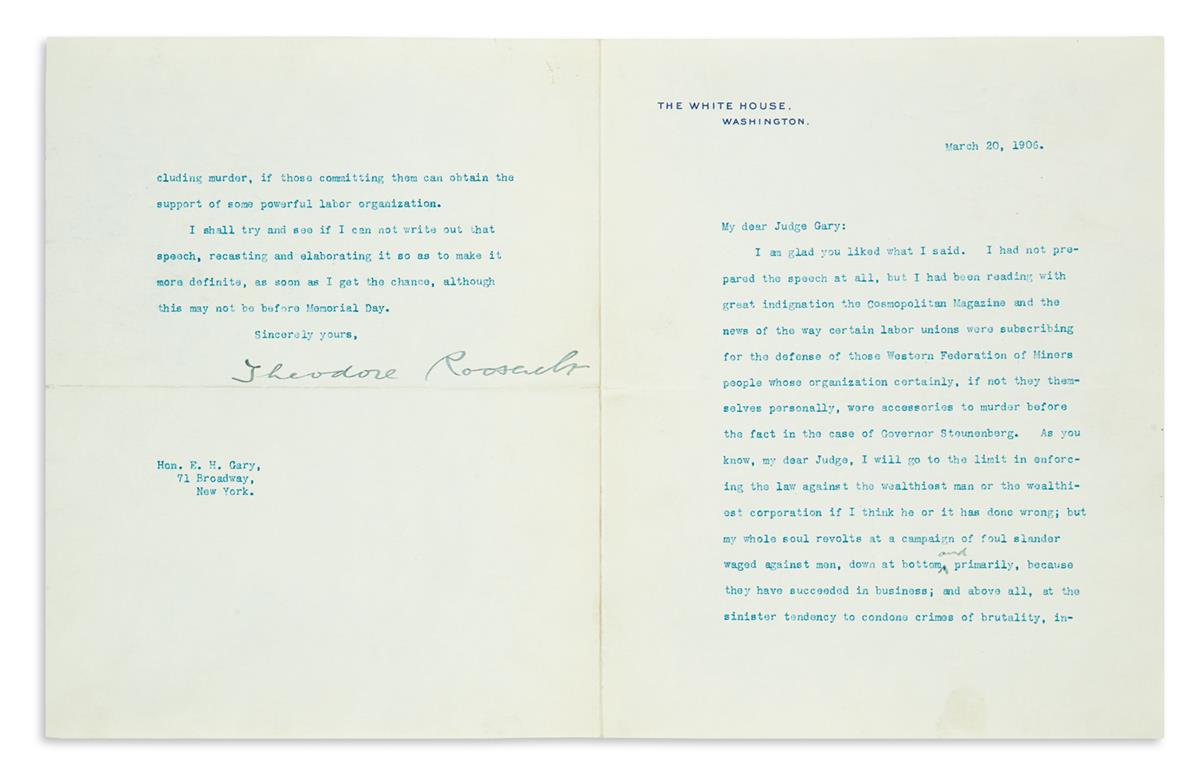