Price Realized: $ 2,500
Price Realized: $ 3,125
?Final Price Realized includes Buyer’s Premium added to Hammer Price
Estimate: $ 4,000 - $ 6,000
"WORKERS . . . MUST POSSESS THE RIGHT OF COLLECTIVE BARGAINING" ROOSEVELT, THEODORE. Typed Letter Signed, with several scattered holograph corrections or additions, to Assemblyman Michael A. Schapp, urging that the Legislature investigate the working conditions of certain industries that refuse to recognize labor unions, urging also that they establish minimum wage boards for industries in which none exist, sending a typed statement from a representative of the Cotton Garment Manufacturers of New York concerning their attitude toward labor unions [present], and sending a pamphlet containing a printed copy of the agreement between the workers and employers of the U.S. dress and waist industry [present]. 6 pages, 4to, written on rectos only; minor soiling and short closed tears at right edge throughout, horizontal fold. (TFC) New York, 24 January 1913
Set Alert for Similar Items

". . . [I]t is now imperatively necessary that the Legislature of the State should undertake a thorough investigation into the labor conditions of the special industries severally designated as white goods, wrapper and kimona. . . .
". . . [T]he employers in those industries [do not] recognize the fundamental need that the employees shall have the right to combine into unions . . . . Mr Harry A. Gordon, the counsel of the employers in the white goods industry . . . . specifically admits that in some cases there is need of shorter hours of employment, of improved sanitation, and of a rise in wages--on all of which points all my other informants entirely agree with him. . . .
"I emphatically dissent from the position taken by Mr. Gordon as representative of the manufacturers in their attitude toward trade unionism. . . . the position that the employer ought to treat his employees well and humanely, but should be held responsible only to God and his own conscience for his actions--a position taken throughout history . . . by absolute monarchs . . . . The manufacturers . . . express their emphatic opposition to the protocol . . . signed September 2nd 1910. . . . Mr Gordon states that his organization will not deal with or recognize the union. To my mind this is the critical point . . . . [W]orkers . . . are absolutely helpless if they are obliged to bargain for their rights individually. They must possess the right of collective bargaining . . . . [T]here must be a government body, like the United States Department of Labor, whose business it shall be to oversee the actual workings of the industry . . . . It is well to bear in mind Abraham Lincoln's homely phrase that 'There is a deal of human nature in mankind.' There are, and will be, individuals and organizations that misbehave themselves among labor unions exactly as among employers' associations. . . .
"I visited . . . strikers in Henry Street and in St Marks Place . . . . In Henry Street the girls were mostly recent immigrants from Southern Spain and from the Turkish Empire. . . . These young girls from Turkey represented the lowest and poorest paid workers that we saw; their fathers and brothers being ignorant of English find it difficult to get employment, and the girls often support the whole family on their scanty sweatshop earnings. . . .
"In St Marks Place . . . . [m]any of these girls did not live at their homes . . . . [T]his lodging sometimes consist[ed] of one bed and sometimes of a place in a bed with other girls. . . .
"Now here were young girls, many of them undeveloped children, toiling excessive hours each day, often . . . in dark unsanitary shops, without any adequate fire protection, sometimes under grossly unsanitary conditions, generally for low wages, diminished in many cases by charges for machines, electric power, for needles and even for drinking water. These girls are to be the future mothers of part of our American citizenship . . . . Aside even from the feeling of deep sympathy for them personally . . . , there is the larger question of the social good of the whole race. . . .
". . . Under the protocol of which I send you a copy, minimum wage boards are established by the . . . industry itself through cooperation between the manufacturers and the workers. I ask that the State . . . [create] such boards in such industries where they have not been created freely . . . ."
with--Three items: Typed statement by Harry A. Gordon, Counsel for the Cotton Garment Manufacturers of New York, announcing the formation of the CGMNY, its dedication to improving conditions in the industry, noting that it would "not deal with or recognize the Union," and giving the industry's perspective of claims made about conditions in the industry by the press and others. 5 pages, 4to, written on rectos only. Np, [1913] Typed letter from Harry A. Gordon to Schaap, stating that he urged Roosevelt to demand an investigation into the garment industry and arguing that such an investigation would benefit the industry. 3 1/2 pages, 4to, written on rectos only. New York, 13 February 1913 Jules Henry Cohen. Protocol of Peace in the Dress and Waist Industry. 10 pages, 8vo, original wrappers, stapled binding; many leaves detached. Np, [1913].
Michael A. Schapp (1874-1957) was floor leader for the Progressive Party in the New York State Assembly during 1913 and 1914. 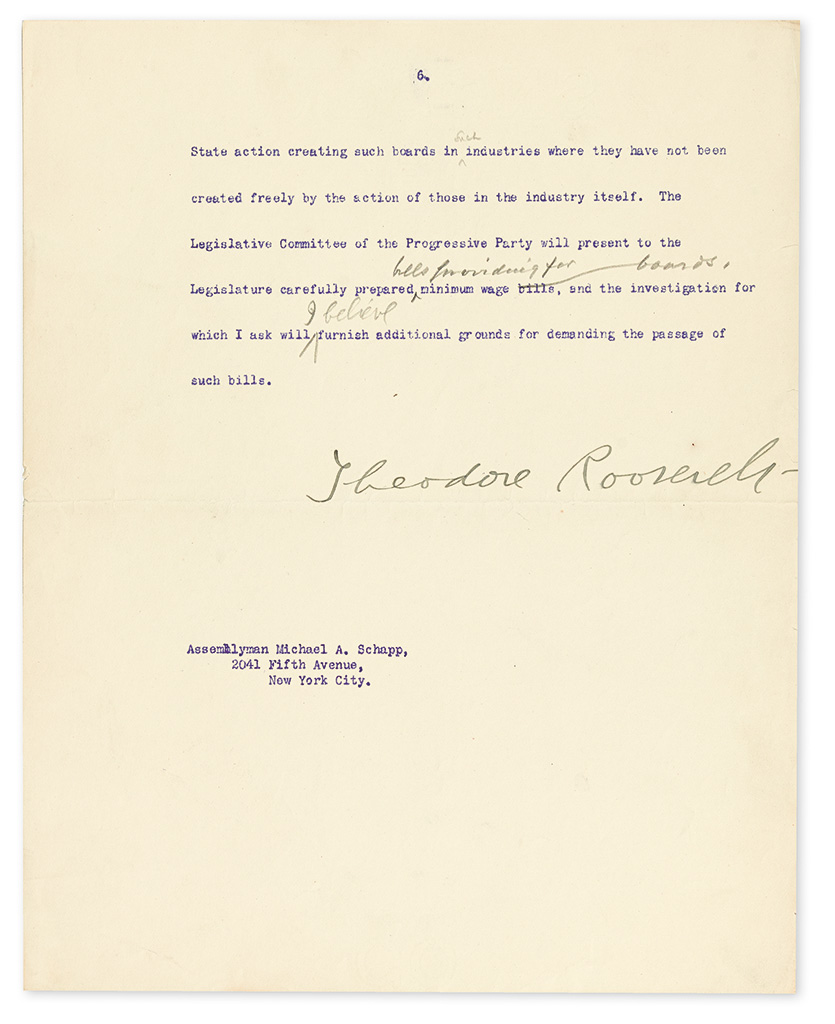