Price Realized: $ 550
Price Realized: $ 688
?Final Price Realized includes Buyer’s Premium added to Hammer Price
Estimate: $ 300 - $ 400
STEPHENS, ALEXANDER H. Two letters: Autograph Letter Signed, "AHStephens" twice * Letter Signed, with 6-line holograph postscript additionally Signed, "A.H.S." The first, to John Walker Wilde, acknowledging receipt of scrip for stock in a railroad, reporting having instructed Mr. [Orsen] Wiggins to sign dividends over to Stephens, and explaining that there may be a delay because Wiggins has not been heard from since he sold his stock to Mr. [William] Alexander. 1 page, 4to, pale blue paper, with integral address leaf bearing his franking Signature; faint toning and minor chipping at edges, folds. The second, to "Dear Mr. Baldwin," noting two typos in last night's issue of the Augusta Constitutionalist, proposing to hire him as a private secretary to replace Charles William Seidell, describing the terms of the job, and, in the postscript: "Since this was written, yours of the 18th . . . at hand. No reply to that other than what is written." 7 1/2 pages, 8vo, quad ruled paper, written on recto and verso of 4 sheets; horizontal folds. Crawfordville, 9 November, 1846; Washington, 20 March 1882
Set Alert for Similar Items

20 March 1882: ". . . Last night I read the article in the Constitutionalist. In it I noticed but two errors. . . . The 1866 as printed should be 1867, the time when Linton aided his former slaves to go to Liberia. It was the estate of Gibbons & not Bivens, as published, that he bought the slaves of before the war . . . .
". . . Mr. Seidell will not return as my Sec'y. I rec'd a letter from him this morning which I think settles that matter. . . . He would be willing to come for a month or two & while he admits that what I pay him is more than he could make in any business at home, yet his family interests require his attention. . . . [H]owever much I regret the loss of his services yet I must have a sec'y constantly & always with me. He must . . . board in the house with me & ready at any hour or moment to respond to a call I may make on him. . . . Some one who will take charge of all my letters, read them, understand them, file them . . . & see that they are answered as well as keep up the correction of the proof sheets of my book when it comes. . . . Now my proposition to you . . . . [B]oard at this hotel & $50 a month in cash besides. . . . I paid Mr. S. $75 a month in cash but this was because of his extraordinary facility with the pen & efficiency as a clerk. . . .
. . . Mr. Ironside . . . is still writing for me but can only give me portions of the day as he is studying law & attends lecture every night. . . .
". . . Hoping that the events will so turn at last that we may be in the relation which was so fondly anticipated in 1875 & thwarted by providential causes . . . ."
With--Document signed by William Alexander and two witnesses granting power of attorney to John W. Wilde and authorizing him to transfer two shares of stock in the Georgia Rail Road & Banking Company to Alexander H. Stephens which formerly belonged to Orsen Wiggins. 1 1/4 pages, 4to. [Crawfordville], 26 October 1846. 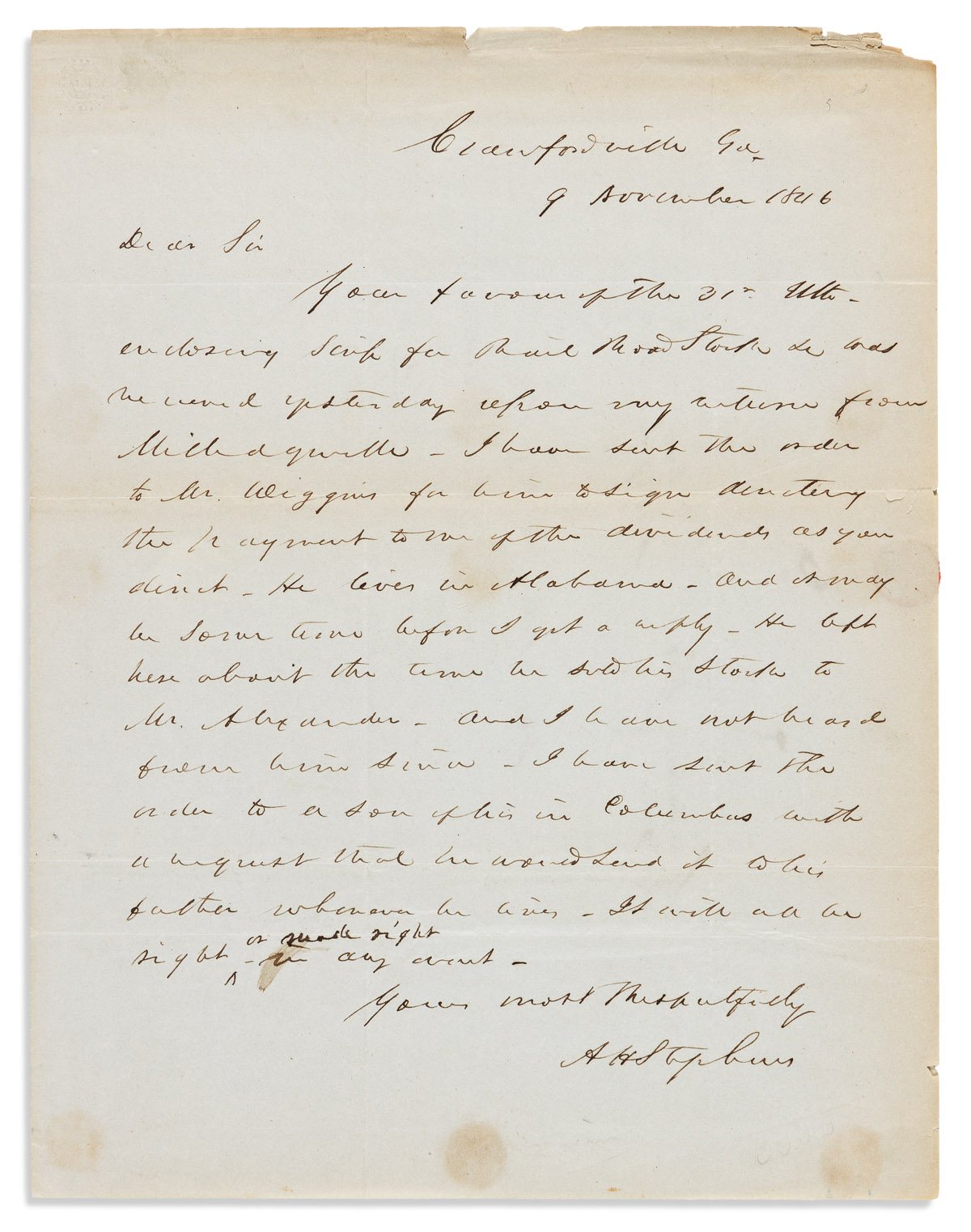