Price Realized: $ 100,000
Price Realized: $ 125,000
?Final Price Realized includes Buyer’s Premium added to Hammer Price
Estimate: $ 70,000 - $ 90,000
Smith, Adam (1723-1790) An Inquiry into the Nature and Causes of the Wealth of Nations. Two large quarto volumes, I: A4, a2, B-A4, Aa-Zz4, 3A-3T4 (final blank may not be integral); II: [pi]2, B-Z4, Aa-Zz4, Aaa-Zzz4, 4A-4F4, 4E2; with a five-line inscription on ffep of first volume attributed to William Alexander (1729-1819), "These two volumes were gifted to W:A: by the author, before publication with a handsome compliment in Mr. Smith's writing which was cut out by a stupid French bookbinder & could not be found, he having destroyed it as sullied paper & substituted this clean leaf in place of it." Followed by an inscription signed by Frank P. Blair Jr. (1821-1875) dated March 22, 18[68], "The above note is in the handwriting of Mr. William Alexander, the great grandfather of my children on their mother's side, who is said to have written the chapter on banking contained in this work, & what is more probable to have furnished the material to the author from which that chapter was complied. Mr. Alexander was a banker in Edinburgh and a member of the Club of Literary men to which Adam Smith & David Hume and other eminent Scotsman of that day belonged, and I have in my possession a copy of Hume's History of England which was presented to him by its author. He emigrated to this country and was the partner of Mr. Robert Morris of Philadelphia. There is in this volume on the 145 page, a marginal correction of the text, evidently in the handwriting of Adam Smith its author." The two volumes bound in full contemporary calf, boards rubbed, both volumes rebacked, corners neatly repaired; with F.P. Blair's bookplates and two envelopes addressed to him inserted, 11 x 8 3/4 in. (2) London: Printed for W. Strahan and T. Cadell, 1776.
Set Alert for Similar Items

Alexander lived an interesting life, connected to some of the most influential people in British and American circles in the colonial and revolutionary period. In Edinburgh, Alexander mingled with Adam Smith, Benjamin Franklin, and other influential writers and thinkers. He was a founding member of the Royal Society of Edinburgh, along with Smith and Hume. Alexander lived in France in the 1770s with his daughters, and was employed by Sir William Pulteney, because of his connection to Franklin, to position himself as a peace negotiator for the British. Although some historians consider Alexander to have been a spy for the British, his sympathies to the American cause were no secret. He encountered John Adams at Franklin's home in France as well, and the two maintained a mutual circumspection of one another as described in David McCullough's biography of Adams. Alexander's daughter Mariamne (1758-1816) married Franklin's grandnephew Jonathan Williams Jr. (1751-1815) in 1779 further cementing their bond. When a peaceful end finally came to the Revolutionary War in 1783, Alexander resolved to pursue a career in the tobacco trade in North America. Before emigrating, while still in France, he signed the Oath of Allegiance to the United States, witnessed by Ben Franklin himself at Passy. Once arrived in Philadelphia, he was introduced to Robert Morris (1734-1806) and the two formed a partnership. Alexander had two wives, and as a result two families. The first set of children was born in Scotland to Marione Louise de la Croix (d. 1773) between 1727 and 1737. Alexander's other children were born to Agatha de la Porte (1774-1817) in Virginia in the late 1790s.

Alexander's note in these volumes referring to the author's presentation can only be taken at face value. That he refers to a "stupid French bookbinder" accords with his 1776 residency in France, even as it leaves the reader with sadness over the loss of that "sullied paper." His connection to intellectual and politically well-connected society in Edinburgh, London, Paris, and the United States is clear. Details of Alexander's biography and those of his progeny suggest that this copy of Smith's Wealth of Nations may have been transported to these shores with their owner in 1783. See also Richard B. Morris's The Peacemakers, New York: Harper & Row, 1965.

Additional supporting material available upon request, including scans of a recorded letter in Alexander's hand with writing consistent with the ffep inscription. 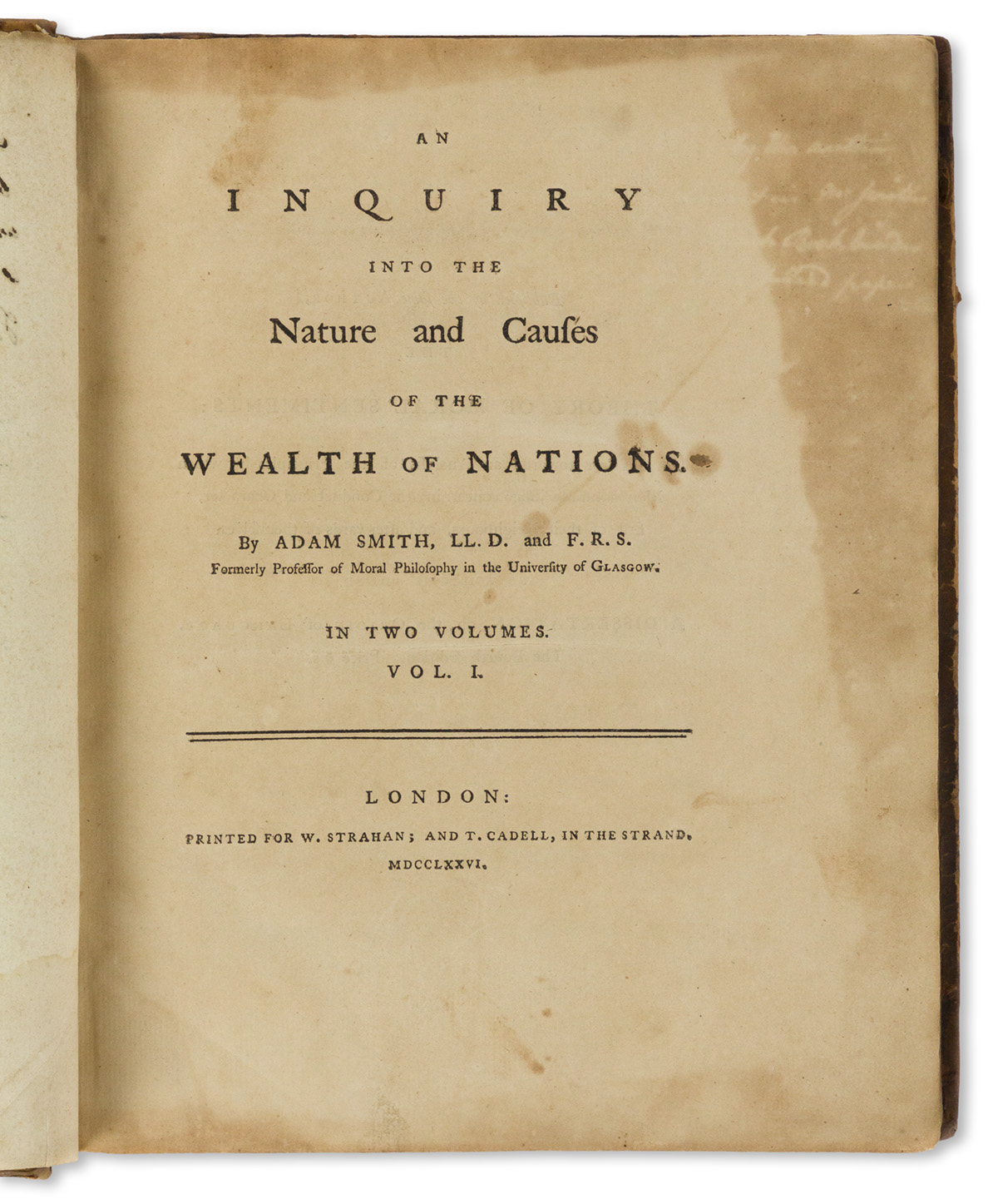