Including more than 375 individual pieces, the vast majority correspondence both sent and received by Smith, including approximately sixty-five pages dating from the period before she married Charles Eigenmann, as her career and studies were getting off the ground, most letters addressed to her parents, several to an unidentified friend addressed in shorthand symbols; the balance of the material, dating from 1887 through 1899, representing transitional periods for the scientist, as she managed her own work, while coping with a travelling spouse and the appearance of five children in her life, one with a disability; the earlier period correspondence includes six letters to Smith from William George Willoughby (1825-1911) of the California Academy of Sciences, along with several receipts from the Academy for biological specimens given by Smith; a very large trove of material housed in three thick 3-ring binders.

Rosa Smith Eigenmann is considered the first woman ichthyologist in the United States. She discovered a new species of eyeless fish, the blind goby or Othonops eos, living in caves beneath the Point Loma Peninsula in San Diego, California in 1879. At that time, she was a graduate of the Point Loma Seminary and a member of the San Diego Society of Natural History. She was the first woman to enjoy full membership in the Society, and also served as its librarian and recording secretary. A meeting with Indiana University ichthyologist David Starr Jordan allowed her to tour Europe in the summer of 1880 and then begin studies in zoology at IU.

Sometime in 1882 she was forced to abandon IU without taking a degree and return to California to care for a sick family member. This is where the present collection of correspondence begins. In July of 1882 she connected with Harford at the California Academy of Sciences, who wrote to her regarding her work with the blind goby. She, Jordan, and Harford traded samples of rare fish for research during this period as recorded in the correspondence here. By June of 1883, Smith is writing from San Francisco and actively involved with the Academy of Sciences, describing her work there, "I worked at fishes in the Acad. yesterday morning. While there Mr. Harford brought in some fishes from China [that were discovered] with gold fishes. He put them alive into alcohol for my own collection." She is looking for work at the end of July, eventually finding a teaching position at Snell Seminary in Oakland.

Four letters and one signed document sent to Smith by close friend, botanist, and landscape architect Kate Sessions (1857-1940) from 1885 are included in the lot.

After Smith's marriage to IU ichthyologist Carl Eignemann in 1887, the couple moved to Cambridge, Massachusetts, where they both studied fish samples collected by Louis Agassiz in South America at Harvard. With the arrival of children, Smith is forced to step back from her science career somewhat, but the letters from this period are also of great interest as we see her balancing the demands of the family while continuing her work.

1888 is well represented in this collection, while the Eingenmann's were stationed at Woods Hole, Massachusetts. In all, Smith published twelve papers between 1880 and 1893, and co-authored an additional twenty-five with her husband. This collection offers opportunities to gain greater knowledge of her life.
Set Alert for Similar Items 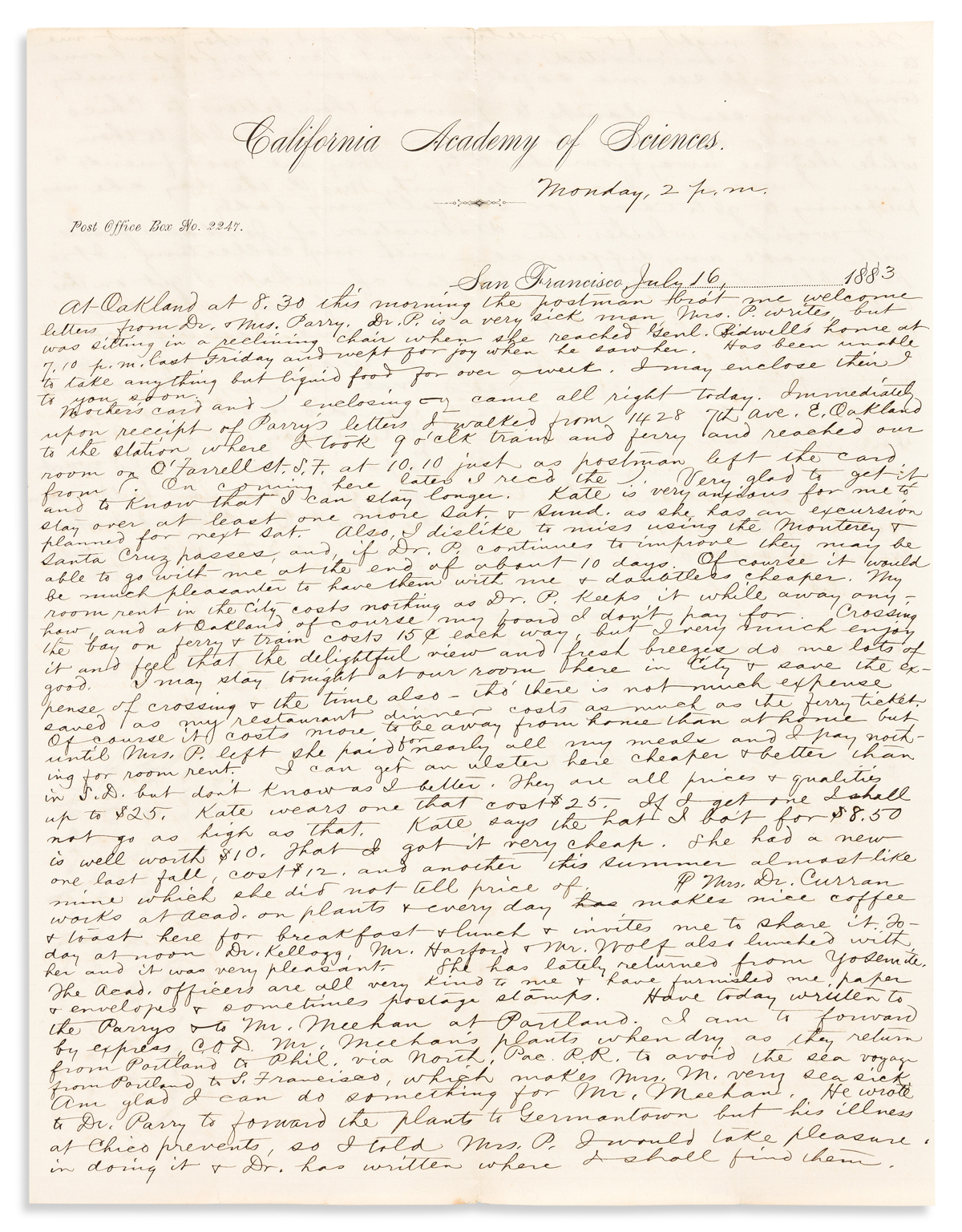 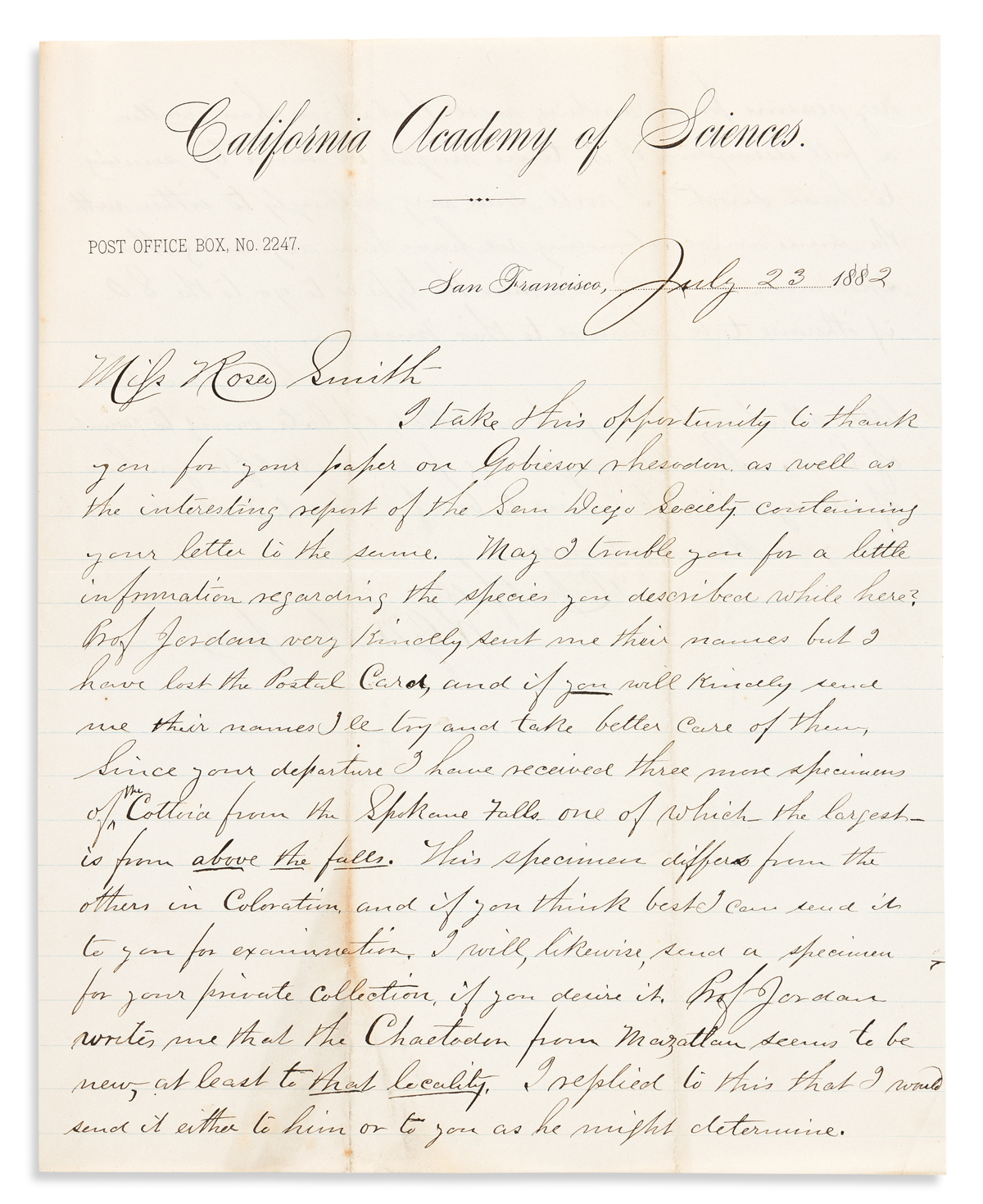