Price Realized: $ 2,200
Price Realized: $ 2,750
?Final Price Realized includes Buyer’s Premium added to Hammer Price
Estimate: $ 2,000 - $ 3,000
COMMENTING UPON DEVELOPMENTS AT THE PARIS PEACE CONFERENCE TAFT, WILLIAM HOWARD. Group of three Typed Letters Signed, "WmHTaft," each to correspondent for the Cincinnati Times-Star Gus J. Karger, analyzing events at the Paris Peace Conference as they impacted the League of Nations proposal. The first, discussing his reservations to the Covenant of the League of Nations and sending a typed copy [present]. The second, criticizing the direction taken by Senators Henry Cabot Lodge, Philander Chase Knox and Albert B. Fall, discussing his personal family finances including the $10,000 annuity that Andrew Carnegie bequeathed to Taft upon his death, and, in a four-line autograph postscript, expecting visitors and expressing delight that his wife is recovering. The third, expressing pleasure that President Wilson seems to be driving toward a settlement regarding the League, remarking that Wilson never forgets an affront, expecting that Wilson will not give him an appointment, and discussing personal and family news. Together 9 pages, 4to, personal stationery, written on rectos of separate sheets; marked paperclip staining at upper left throughout, horizontal folds. Pointe-a-Pic, 10 July; 30 August; 10 September 1919
Set Alert for Similar Items

10 July: "I enclose . . . some tentative reservations . . . which . . . might be made without affecting the usefulness of the League, and without really raising the opposition or delaying the general settlement of the peace terms. . . . It is the threat of Article X that is going to be effective, and the more you weaken it, the less useful the League becomes. I have limited the operation of Article X to five years . . . . The second reservation is . . . on the subject of the necessity for the action of Congress in fulfilling the obligation of Article X. . . . I have put in the third to affect immigration and tariffs . . . . The fourth is in respect to the Monroe Doctrine. It . . . excludes non-American nations from any interference in this hemisphere to enforce Article X unless we choose to invite them in.
"The attitude of Lodge and Spencer and . . . Root, that we can not define the Monroe Doctrine . . . is German, is domineering, is bullying, is offensive, and is wholly unwarranted by any precedent. . . .
". . . I would not consent at all, and I did not think Wilson would, to elimination of Article X. . . . The advantage of limiting our obligations under Article X to five years is that it is likely to induce acquiescence . . . on the part of the other nations, because having the right to withdraw form the League altogether . . . , they are not conceding anything substantial in acquiescing in . . . our notice to withdraw . . . . [I]f we get into the League on the ground floor, I have no doubt we shall stay in . . . . More than this, it will keep us in close touch with the other great powers . . . over this period immediately after the war, so critical in the history of the world . . . .
". . . [P]robably Wilson would object to [these reservations], but I would like to have him study them over. They are only tentative, but they show what is running in my mind. If I were Wilson, I certainly would not go beyond them, and I believe he can go before the country with them and secure the support of the people . . . ."
30 August: "Fall is a bombastes furioso, whom I had to dress down once at Albuquerque before New Mexico came in. He swaggers and blusters and must disgust members of the Senate . . . . [I]t would seem as if Knox and Lodge and Borah and Johnson and Brandegee and Fall were digging the hole they are in deeper and deeper. They really run the danger of compelling their own party to disassociate itself from responsibility for them . . . ."
10 September: ". . . I have no doubt that Knox drew this second reservation with the distinct purpose of cutting the heart out of the League . . . . I see that [Republican National Committee Chairman Will H.] Hays is out in favor of it. . . . [E]xcept that you know he is trying in some way or other to get the Republican party against Wilson . . . .
". . . [I]f we have the votes to beat the committee report, as I hope we have, it will force the Republicans into the acceptance of a compromise made by the Democrats and the mild reservationists. . . . I observe that Wilson is pressing the point of pro-Germanism, and I am glad he is. The longer the delay, the greater impatience there will be . . . ."
In 1915, Taft became the first president of the League to Enforce Peace, an organization devoted to the development of an international body to police world peace. In 1919, the League turned its energies toward the support of Wilson's proposal for a League of Nations; it continued to meet until 1923, when it was dissolved. 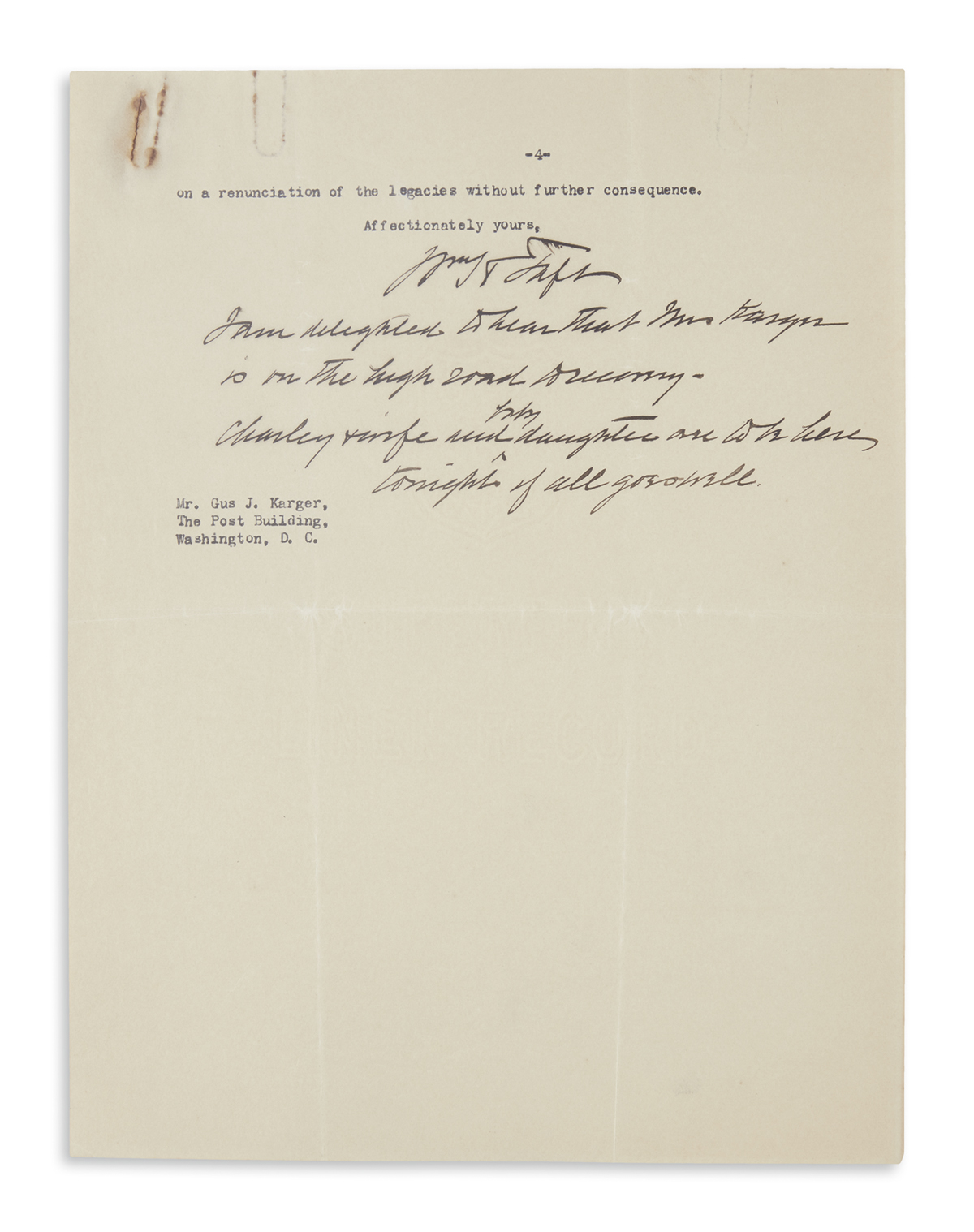 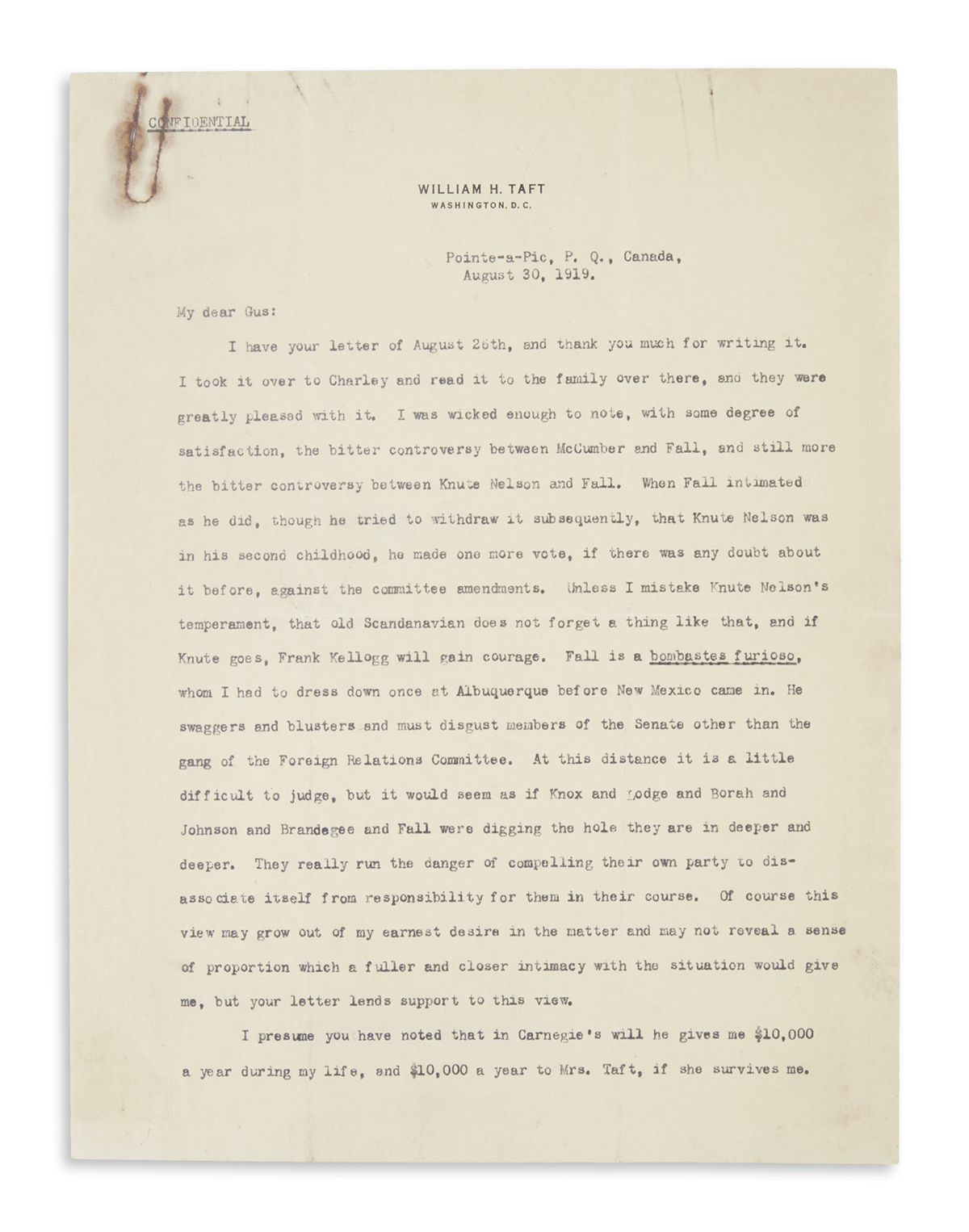