These letters from the much-beloved playwright to a close friend in Houston reflect his strength, generosity of spirit, and ready wit, with substantial insight into his creative process and professional life. The correspondence extends from 1988 to 2018, with the longest, most frequent, and most substantial letters from 1988 to 1990. In his first letter, McNally hopes to visit during an opening in Houston: "I do hope to see you both, and wonder if we can do the de Menil collection or something else marvelously high-toned (or low, I'm easy)" (8 October 1988), and followed up with thanks: "I couldn't have asked for better looking, brighter or just sassier tour guides" (9 June 1989). He sent condolences on his friend's partner's death soon after: "I will never forget the kindness he showed me . . . and the grace and courage with which he faced his ordeal" (6 August 1989). On 18 September he added "I know these are hard, painful times for you. There's no reason they shouldn't be. Use your friends. That's what we're here for."

A remarkable letter from 12 October 1990 starts with an apology for his [perfectly legible] handwriting: "That's one of the reasons I don't write many letters. The main one is that I never felt I wrote very good ones. I've gotten used to speaking through my characters instead of in my own voice, though Cal's last speech in Andre's Mother and whole chunks of Stephen in Lisbon are pretty close to what I sound like talking. . . . I am not an unhappy man. I am an angry one. I'm working on it but it's still there. I'm sure you've already seen it. It's everywhere in the plays, which is probably the best place for it. When it comes between me and another unsuspecting / undeserving person, I feel deeply sad and ashamed." On 31 August 1990 he wrote "My new play is called Lips Together, Teeth Apart. Do you like it? Tell me while there's still time."

Those who seek inside show-business content will not be disappointed. On 24 October 1990 McNally discusses the film adaptation of his "Frankie and Johnny in the Clair de Lune" starring Al Pacino: "I rented Sea of Love last night and think Al (I really do know him, have for years) will be a wonderful Johnny. My agent told me this morning that Michelle Pfeiffer is set for Frankie. I told them last week why I didn't think she was right for the role, but they went ahead and hired her. Maybe the film will bear some resemblance to the play." The next day, after receiving an Emmy award for Andre's Mother, he sent two rather silly photographs posing with the trophy, adding "Sending you this photo proves I have no vanity . . . I need psychiatric help." On 9 November 1998, he wrote that a local restaurant was "still recovering (so am I) from the sight and sound of my being serenaded by Liza, Chita, Patti LuPone & Glenn Close singing a special birthday song by Kander & Ebb. . . . Too bad it wasn't taped."

On 7 August 1991, McNally reflected on the horrific gay-bashing murder of Paul Broussard: "The murder upset me terribly, probably because it was Texas, which, like it or not, I will always be connected to. Please let me know what happens. . . . I assume the assailants will get maximum sentences (I am for the death penalty)." On the other hand, many of McNally's postcards are leavened with whimsy and humor. On a postcard of Long Island's "Big Duck" near his Hamptons weekend home, he wrote "This is the great tourist attraction of L.I. I saw Madonna here!" (18 August 1990). On a postcard of Toronto's baseball stadium, he writes "Is this card butch enough for you?" (1992).

A collection of 9 of McNally's books, signed and inscribed to his friend between 1988 and 1994, all in hardcover with dust jackets except as noted: The Lisbon Traviata; Frankie and Johnny in the Clair de Lune; It's Only a Play; The Ritz; The Ritz and Other Plays; Lips Together, Teeth Apart; A Perfect Ganesh; Three Plays by Terrence McNally (paperback); and 15 Short Plays (paperback); plus 7 other unsigned trade paperbacks featuring McNally's works.

A pair of signed playbills from performances of "Lips Together, Teeth Apart," 1991 and 1993; and unsigned playbills for "A Perfect Ganesh" and "Kiss of the Spider Woman" (the 1992 premiere in Toronto); and a file of 31 clippings and other ephemera. 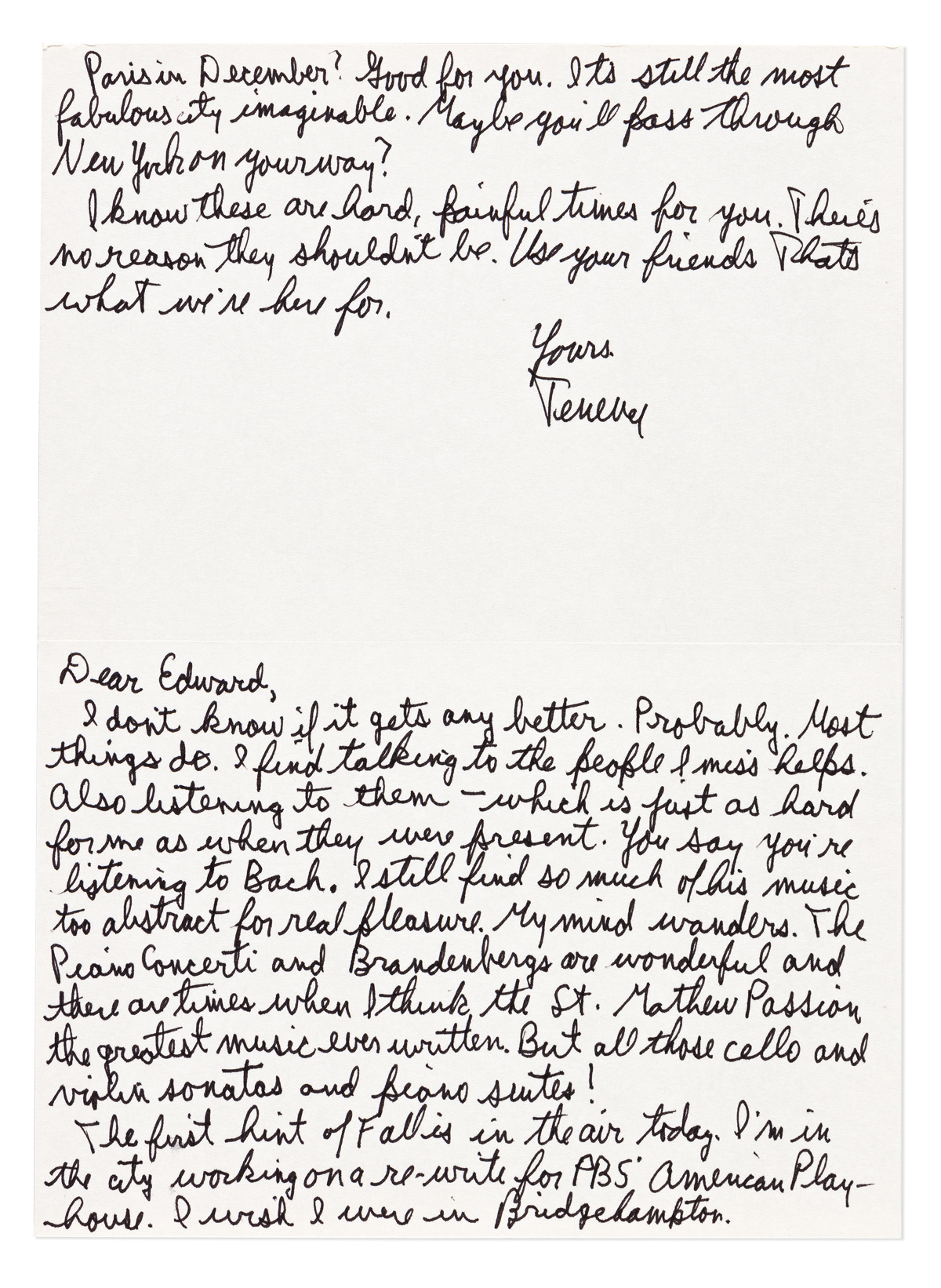