Price Realized: $ 38,000
Price Realized: $ 43,700
?Final Price Realized includes Buyer’s Premium added to Hammer Price
Estimate: $ 30,000 - $ 40,000
THE BEGGARSTAFF BROTHERS, JAMES PRYDE (1866-1941) AND WILLIAM NICHOLSON (1872-19 A TRIP TO CHINATOWN. 1894.
117x891/2 inches. Dangerfield Printing Co., London.
Condition B+: restoration and repaired tears along vertical and horizontal folds. 6 sheets.
Following in the same, Japanese-influenced footsteps of Toulouse-Lautrec, these two young brothers-in-law took tremendous steps in revolutionizing the graphic arts. In spite of the artistic and historical importance of their work their careers were not easy and they constantly struggled with their clients. As a result, their production was very limited and the survival rate of their work even less! Their conceit was to compose striking images using simple paper cutouts which they intended to be turned into posters. In 1894, they exhibited a number of these sketches at the Royal Aquarium, fishing for clients, with no success at all. The story behind this poster is a good indication of the misunderstandings the Beggarstaffs had with their clients. The original design of the Chinaman was sold to advertise a musical comedy, "A Trip to Chinatown" by Charles Hoyt, which opened at Toole's Theatre on September 29, 1894. However, the design was altered by the printer, Dangerfield, who decided to add the chocolate background and the pseudo-Chinese typography. These changes infuriated the Beggarstaffs. Nicholson commented that the overall design was "mutilated by some idiotic imitation of Chinese lettering placed around it to form a border." (The Idler, January 1896). This conflict explains why the poster is unsigned, as the Beggarstaffs refused to put their name on a work they no longer regarded as their own! Regardless of their squabbling it is an impressive image, enormous in size, with the impeccable profile of the Chinese man against an orange background, balanced by a green square in the purest Ukiyo-e tradition. The poster achieved world-wide acclaim, appearing in Les Maitres de l'affiche (1899) and in L'Affiche Etrangeres, it also appears in the catalogue, of Alexandre Henriot's poster exhibition in Reims in 1896 (no. 1357). Even in its own day the poster was considered extremely rare and expensive; in the October 15, 1899, l'Album d'Affiches de la Plume the poster was offered for sale for 20 French francs. By comparisson, in the same catalogue Toulouse-Lautrec's Aristide Bruant dans son Cabaret was offered for 3.5 French francs, and Alphonse Mucha's Bieres de la Meuse was available for 5 French francs! Very few copies of this poster are currently known to exist. The Hamburg Kunstgewerbe Muzeum has a copy in their archive, which is pictured in Das Fruhe Plakat. This is the first time this image has appeared at auction. DFP I -16, Reims 1357, Maitres pl. 184.
Set Alert for Similar Items 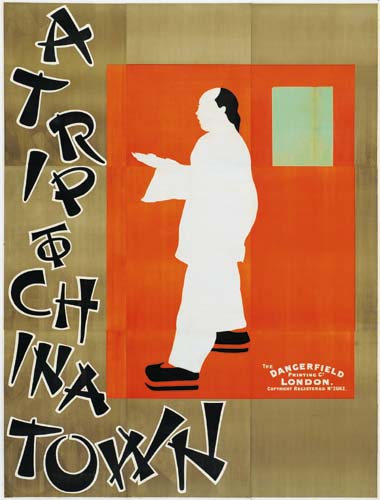