"My exchequer plan will be found in limine in a report made by Mr. [Walter] Forward, then Secretary of the Treasury, to the Senate in the Winter of 1841-2. My message of December 1841 presents its outlines, and that of Dec'r 1842 repeats the recommendation for its adoption, and briefly answers the most prominent objections which had been urged to it. The report which accompanies the plan is worthy of deliberate study. That paper was written by Webster and adopted by Forward. The plan itself was my own, and was drawn up at my house in Williamsburg, whither I had gone for the purpose of close retirement while eliminating the work. It was presented to the Cabinet and adopted as a Cabinet measure, only one suggestion of amendment being urged upon me, and that I adopted upon the condition that I should present the plan to Congress in the alternative to be adopted by that body either with or without the amendment, as it might seem proper. The amendment simply provided the means of paying the expenses by authorizing a limited dealing in the exchanges. Agencies were proposed to be established in all the States, but if a State prohibited it the agency in such State was forbidden to deal in exchange. This proviso was incorporated by myself under the decision of the Supreme Court in the case of the City of Augusta vs. Earle, and other similar cases. I cannot lay any hand on the original draught as prepared by myself, and presume I handed it over to Mr. Forward. The scheme, doubtless, may be modified and improved--Mr. Cushing's suggestions in the House, and those of Mr. Talmadge in the Senate, in regard to it, are well worthy to be looked to. My present impression is, that taking the Sub Treasury as its basis, and authorizing the issue of certificates of deposits to individuals in the form of bank notes of denominations of $5 and up to one hundred, with larger sums to be put upon the footing of bills of exchange, for the issuing of which the actual premium of transporting specie from one place to another should be charged, the country would have a paper currency which would be the true representative of the precious metals, and would circulate all over the commercial world. In order to get it under way the government might issue certificates to its creditors, taking care to place actually in deposit gold and silver to the amount of each certificate. The specie deposited should be regarded as sacred for the purpose of redeeming the certificates whenever presented. Those certificates would bear a premium in the markets of the world, and furnish a currency of more value than gold or silver, because more easily transported about one. The only danger would be that the bankers would snatch them up for hoarding in place of gold and silver. The agencies might be the sub-treasuries; but of course the government funds should be kept entirely separated and distinct from the funds of private depositors, except as suggested above. The Madisonian of that day would repay the reading of Mr. Harris, as many of the articles proceeded from the great minds of the Cabinet in support of the project. He would also revive his earlier recollections by referring to Mr. Jefferson's letters to John W. Eppes [June 24, 1813], in the volumes of his correspondence, (which volume I do not at the moment remember). The letter was written, I think, in the year 1816, and relates to finance. By consulting the index he would readily find the letter. It will repay his search."
The panic of 1837 was the most widespread and long-lasting economic disruptions to have occurred in the U.S. up to that time. It was caused by several factors, chief among them were the fiscal policies of Andrew Jackson, including the crippling of the Second Bank of the U.S. The Whig Congress believed a new national bank was needed, and while President Tyler approved some Whig bills, he vetoed a great many, including those designed to establish the national bank they desired, proposing instead a financial system of his own devising that came to be known as the "Exchequer Plan." The plan was not taken up in legislation; on the contrary, more Whig bank bills were passed by Congress, which Tyler again vetoed. Tyler's vetoes prompted the Whigs to expel him from the Party, incited most of his own cabinet to resign, and resulted in the first-ever impeachment resolution against a U.S. president. An independent treasury system was established in 1846 under the administration of Tyler's Democratic successor, James K. Polk, which remained in place until the Federal Reserve System was established in 1913.
This letter is reproduced in the January 12, 1858 issue of The New York Times. 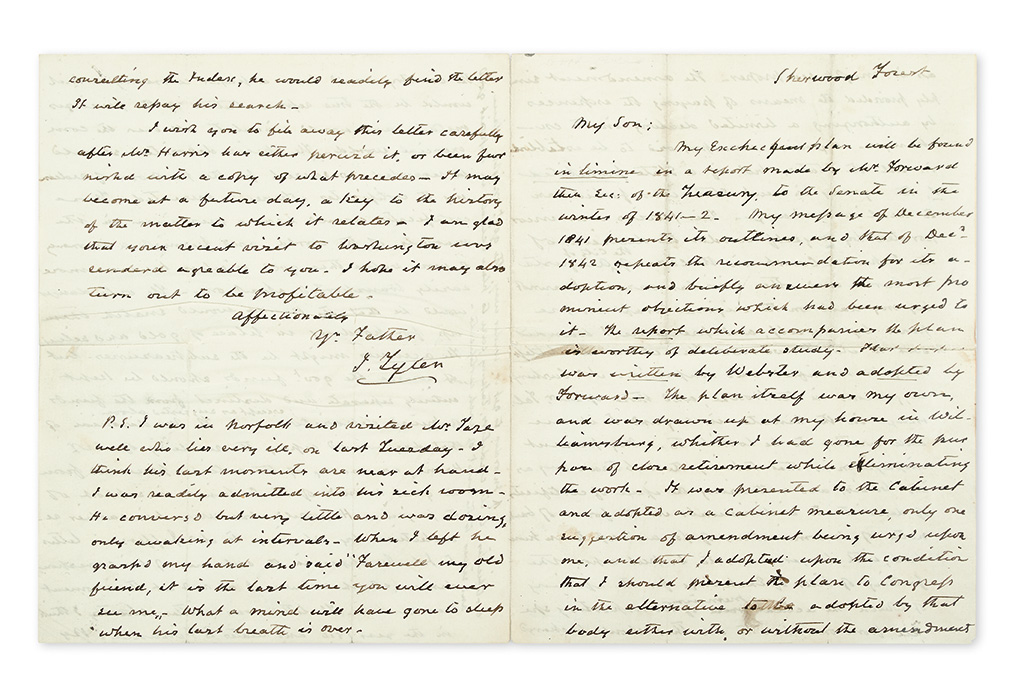