Provenance: acquired directly from the artist; the collection of Larry and Evelyn Neal, New York.

Cultural critic and playwright Larry Neal (1937 - 1981) was a leading national figure in the Black Arts Movement in the 1960s and 70s. Born in Atlanta, Neal grew up in Philadelphia, earning a BA in English and history from Lincoln University. He also studied folklore as a graduate student at the University of Pennsylvania. He moved to New York in 1964. Larry and Evelyn Rodgers, a chemist at Mount Sinai Hospital, married in 1965. Their Harlem brownstone became a center of artistic and intellectual discussion, playing host to Baraka, Ishmael Reed, Henry Dumas, Sonia Sanchez, and other prominent Black Arts Movement artists in the early 1970s. Neal wrote essays about the Black Arts Movement, served as arts editor for the journal Liberator and with Amiri Baraka, he edited the anthology Black Fire: An Anthology of Afro-American Writing (1968). Neal was the education director of the Black Panther Party, a member of the Revolutionary Action Movement, and was a founding member of the Black Arts Repertory School/Theatre. In 1970, he was honored with a Guggenheim Fellowship for African American critical studies. Neal held teaching positions at the City College of New York, Yale University, and Wesleyan University. In the 1970s, he was executive director of the Commission on the Arts and Humanities in Washington, DC. Neal died of a heart attack just at the age of 43; his papers are now in the collection of the Schomburg, Center for Research in Black Culture. Biography courtesy of the Poetry Foundation and the New York Public Library.

This untitled work is a powerful political and expressive painting by Vincent Smith, a large and important painting by the artist made at the height of his artistic career. Here with his intense, fiery color and exaggerated figuration, Smith depicts the violent and physical struggle of the Civil Rights period in New York - arson, protests and fighting in the streets. Vincent Smith painted many episodes of the clashes in the 1960s with fiery scenes from New York City to the Watts Riots in Los Angeles. As in his other 1960s paintings, including The Fire Next Time in the collection of the Detroit Art Institute, Smith paints distorted and disenfranchised figures, often in silhouette or flattened against the picture plane. These figures often confront the viewer, and are pressed against their urban environment. Smith himself has stressed this relationship - "When I paint, I'm always aware of composition because I've always felt that the tighter the composition, the more interesting the work," he told American Visions magazine in 1999.
Set Alert for Similar Items 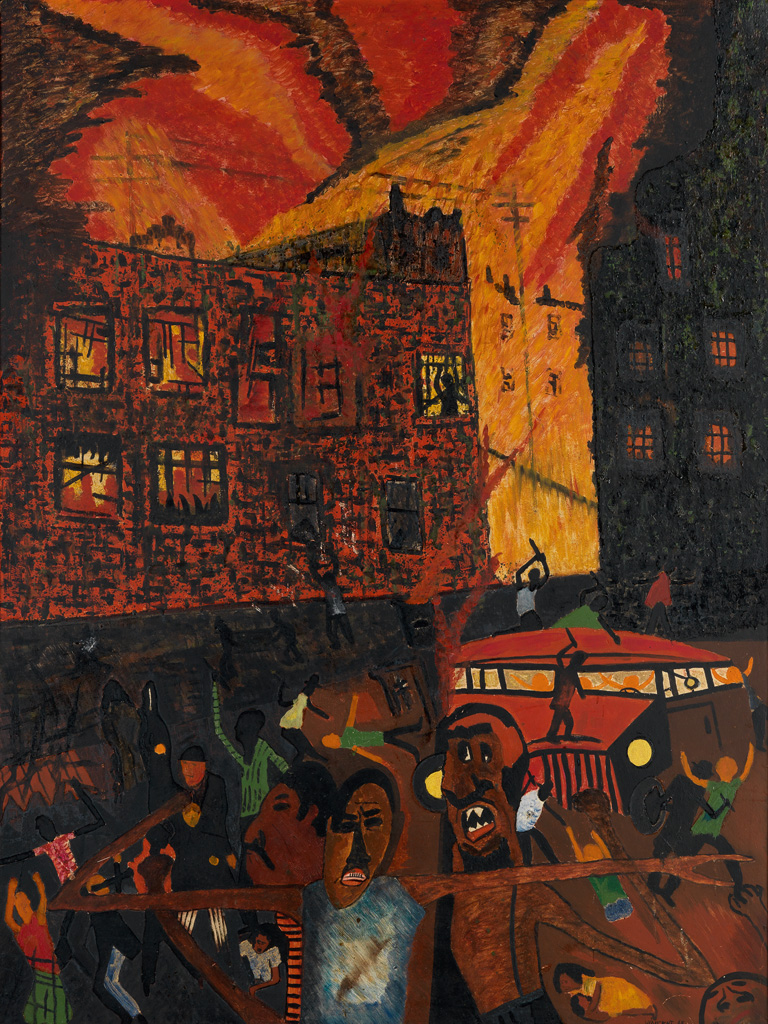