This is Van Gogh's only known etching; he also created 9 different lithographs during the early 1880s.

Following his clash with Gauguin in Arles in December 1888, during which Van Gogh cut off a part of his own ear, and a year in an asylum at Saint-Rémy, Van Gogh moved on to Auvers-sur-Oise to be cared for, thanks to the recommendation of Van Gogh's art dealer brother Theo by Dr. Gachet. A physician as well as an Impressionist art collector and amateur painter/printmaker, Gachet had treated Camille Pissarro (who had recommended the doctor to Theo) and was friends with Manet, Renoir and Cézanne. In 1873, at Auvers-sur-Oise, Gachet had urged Cézanne to make his first etchings.

In May 1890, Van Gogh started treatment with Dr. Gachet and soon after, at Gachet's prompting, etched this portrait of the doctor, working on a small etching press that Gachet had installed in his house. With renewed vigor, Van Gogh wrote to his brother Theo of plans he had to make additional etchings: "I hope very much to do a few etchings on Southern [French] subjects, say six, since I can print them without expense at Dr. Gachet's, who is willing to pull them for nothing, if I make them."

This etched portrait of Gachet shows the doctor with a melancholic expression similar to the two oil portraits Van Gogh made of him in June 1890 (one now in the Musée d'Orsay, Paris; the other in a private collection, sold at at Christie's, New York, May 15, 1990, for $82.5 million) and to which he remarked, in a letter to Theo, "I've done the portrait of M. Gachet with a melancholy expression, which might well seem like a grimace to those who see it . . . Sad but gentle, yet clear and intelligent, that is how many portraits ought to be done . . . There are modern heads that may be looked at for a long time, and that may perhaps be looked back on with longing a hundred years later." On first seeing his brother's etched portrait of Gachet, Theo called it "a true painter's etching. No refinement in the execution, but a drawing on metal."

Sadly, Van Gogh never escaped the melancholy and mental illness that plagued him during this time. Only two months after completing this etching, on July 27, 1890, aged 37, he shot himself in the chest with a revolver. He remained alive for more than a day after the incident and died, with his beloved brother Theo at his side, to whom he uttered his final words: "The sadness will last forever." De la Faille 1664; van Heugten/Pabst 10.
Set Alert for Similar Items 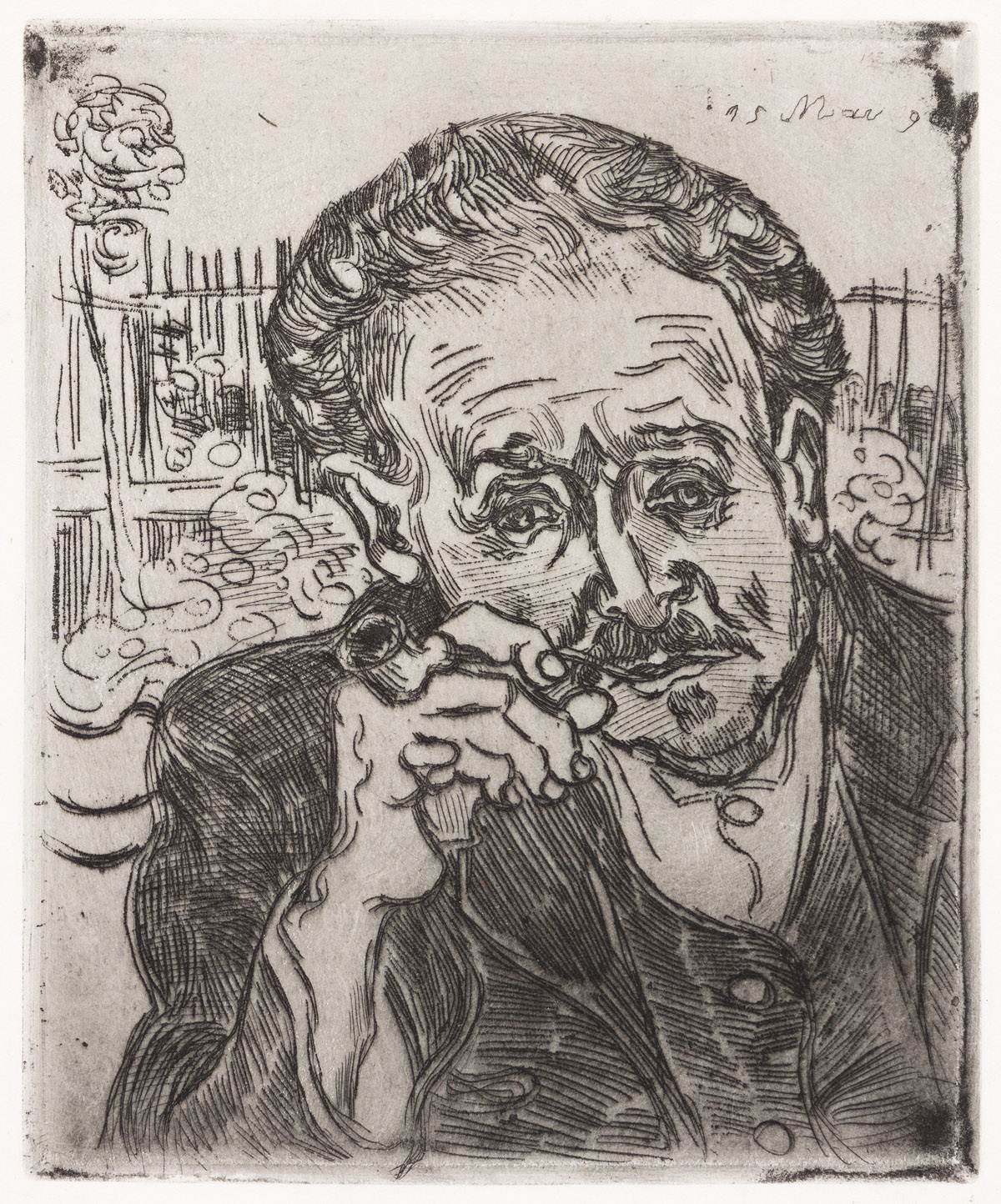