This landscape is a scarce, early depiction of the rural South by Scott--one of only a few of his Southern paintings to come to auction. From Indianapolis, William Edouard Scott trained at the Art Institute of Chicago from 1904-08, and then studied with Henry Ossawa Tanner in France. When he returned from Europe in 1912, he toured the South to paint rural scenes that were not typical of the landscape genre. This painting, and works such as It's Going to Come, 1916, of a proud woman outside her wooden shack, combine his confident paint handling with realist imagery of a poor, rural countryside. His 1918 oil, Traveling (Lead Kindly Light), was used as the April 1918 cover of Crisis magazine; it was inspired by his own grandparents who had traveled by ox cart from North Carolina to Indianapolis in 1847. Reynolds/Wright p. 255; Taylor/Warkel pp. 22-24.
Set Alert for Similar Items 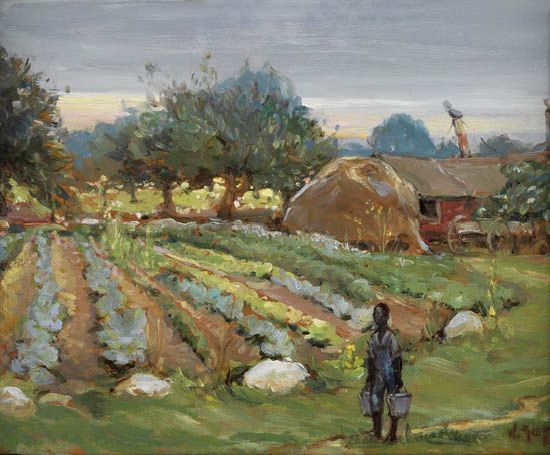