Provenance: the artist; James F. Simon; thence by descent to the penultimate owner, private collection. According to the current owner, this painting was acquired from a family descendent of James F. Simon, who worked for the Rosenwald Foundation in Chicago in the 1930s, and bought it directly from Scott.

Exhibited: Exhibition of Productions by Negro Artists, the Harmon Foundation, New York, 1933. When the Tide is Out is listed in the Harmon exhibition catalogue, along with three other paintings by Scott, including Blind Sister Mary which was purchased by the Harmon Foundation and given to the New York Public Library. It also has an early handwritten label on the verso.

This captivating and complex composition is one of the finest examples from William Edouard Scott's early Haitian period to come to auction. While his time in Paris, where he studied with Henry Ossawa Tanner and at the Académies Julian and Colarossi, had a profound effect on his early career, the year Scott spent in Haiti helped shape the rest of his career. Scott was awarded a Julius Rosenwald Foundation scholarship in 1931 to study and paint the African beliefs and customs that had survived in the culture of this still independent island nation. Scott left for Haiti that year, and did many plein air sketches around the docks where fishermen and merchants came ashore at Port-au-Prince--see the untitled panel sketch, lot 16, sold on February 19, 2008 at Swann Galleries, and exhibited in A Force for Change: African-American Art and the Julius Rosenwald Fund. These studies were later translated into larger canvases in the artist's rooftop studio of the Excelsior Hotel in Port-au-Prince. Scott specialized in large multi-figure paintings, and made a long and successful career from many public mural commissions in Chicago. Schulman p. 86.
Set Alert for Similar Items 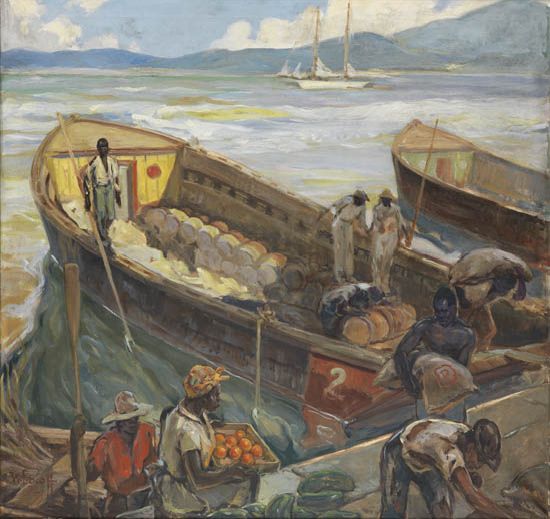