Including: two letters written by Mary Homer Russell (1822-1906) from Cannon Falls, Minnesota in 1857; one letter from Cannon Falls, MN written by Jane Russell (1819-1924); [together with] three letters written jointly from Homer and Detroit, Michigan by family friends Mary Jane Mead (1818-1849) and her husband Henry Laurens Hammond (1815-1893) in 1843 and '44; two early notes written by MHR while at the Wheaton Female Seminary in the late 1830s; two letters written by MHR's husband Joseph Peckham (1816-1884) while he was in Massachusetts and courting MHR; [and] one letter written by JR's husband Captain Charles Weatherby Gelett (1813-1895) whilst in Cannon Falls, MN; sizes vary, one Minnesota letter with Hastings-postmarked envelope dated 1859; and three other Michigan (Detroit & Homer) postmarks from 1843 & 1844; most are addressed to "Mother," Amelia Russell; sizes vary.

The Russell family was headed by epic matriarch Amelia Drew Russell (1785-1868), mother and stepmother to nine faithful and loving children who dutifully wrote home, along with their spouses and other ADR fans throughout the mid-19th century. Although some Russell daughters and sons stayed on the east coast, two ranged widely. Jane went whaling with her husband (for which see lot 44 this auction), and also settled for a time in Cannon Falls, where she and her husband built a house now listed on the National Register of Historic Places. Gelett's letter contains details of these house plans.

In her 1859 letter, Jane says that she prefers "to sit up a little while after the rest have gone to bed & have the room all to myself. It is about all the time I have that is free from interruptions." She's been making butter and tending "my old batcheler," and notes, "my house is dirty, but they say dirt is healthy." It sounds like their house is still under construction. "I got my parlor chamber all ready to plaster overhead but no one seems to have any plaster left for me." She closes with the sad tale of Mr. Chapman, whose wife just died, leaving a new baby behind. "I still miss dear Mrs. C. The babe is looking finely. I held him for his mother to bestow on him the first & last smile he had from her. I assisted in laying her out & in dressing her for the grave. The little one was baptized at the funeral."

Mary Homer is a very lively storyteller. Her two letters from Minnesota contain several amusing anecdotes, including April's Fools pranks. "When it was time to light the candle, I took the first one that came to hand and lighted it and set it on the table. It spattered and sputtered a little and then went out. Jane felt rather vexed as she was in a hurry to use it, but I knew there were plenty of good ones, so I just laid it one side, and took another. Upon examination, we found that it was made of turnip, with a bit of candle wick transferred to it. We had a hearty laugh over the joke." At supper time, the joker was struggling with some very unyielding butter, which he could barely cut, let alone spread onto bread when, "we could not long restrain our mirth, but all joined in another hearty laugh that the rogue got caught in his own trap. Charles had cut off some pieces of yellow turnip and laid in the plate with the butter and they so nearly resembled it. He was completely taken in."

Next, these silly people placed a full-sized "female figure" in Chapman's bed chamber while he was out. "We were in our chamber when he came back but heard his salutation as he entered his room, 'Hallo old woman!' He carried on quite a conversation with her and then took her down into the sitting room for he said he could not sleep with her in the room. He said that he could get along very well if she would sit with her back to him, but he was afraid she might turn around."

A neighbor has a tame faun who runs free. "We frequently hear the tinkling of her bell and see her running near the house. She is fond of playing with children, and sometimes lets us older folks pat and scratch her. She came to me yesterday when I was hanging out clothes, and when I put my face down to her, attempted to lap it for me."

Mary Homer also describes a building failure that occurred during a frivolous locally-sourced theater event. "The exercises were passing off very pleasantly [...] when there came a sudden crash [and we] soon found that the floor beneath us was giving away. A good deal of confusion ensued for a few minutes, but the floor sank so gradually that no one was seriously hurt. [...] Those in the middle of the room were lowered farther into [the cellar] than they cared to be, but they were soon helped out and the room cleared." The report of the collapse is followed by Mary Homer's critique of Minnesotan construction practices of 1857, compared to those found on the east coast.

Mary Jane Mead, who died at the age of thirty-two, includes a few short remarks. She accompanied her husband to Michigan, where he organized the first Congregational Church in Detroit in 1844. Her husband recounts their trip to Homer in detail. MJM hopes to welcome Mother Russell "to our western home, for we soon wish to have one." Noting, "I think you would be delighted with our beautiful 'wilds' and our 'oak openings,' 'our Prairies,' our softly gliding streams, our soft, muddy roads with scarce a stone to jar or jolt the carriage. I shall be better able to say how I like Mich. when I shall have longer resided here." A full transcript of the letters is available upon request.
Set Alert for Similar Items 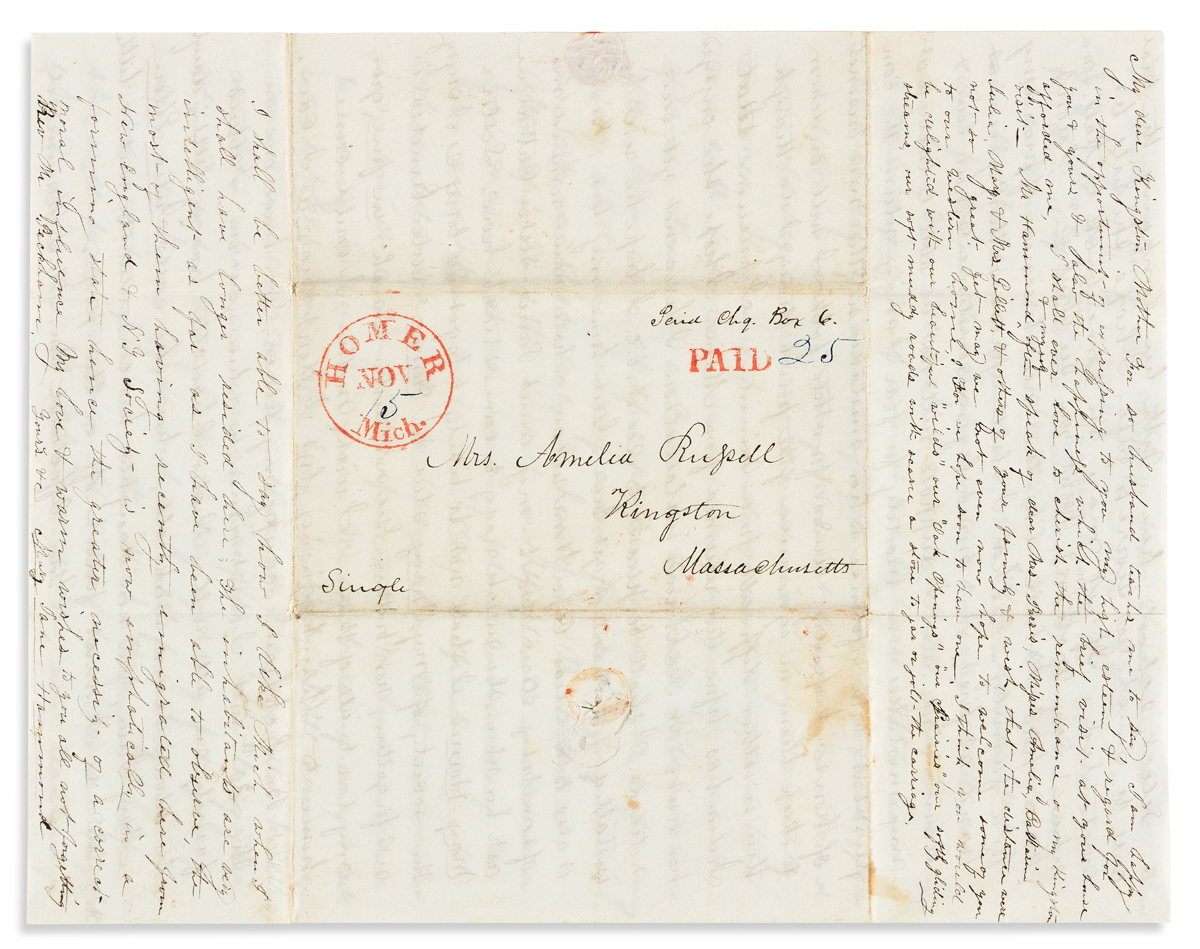 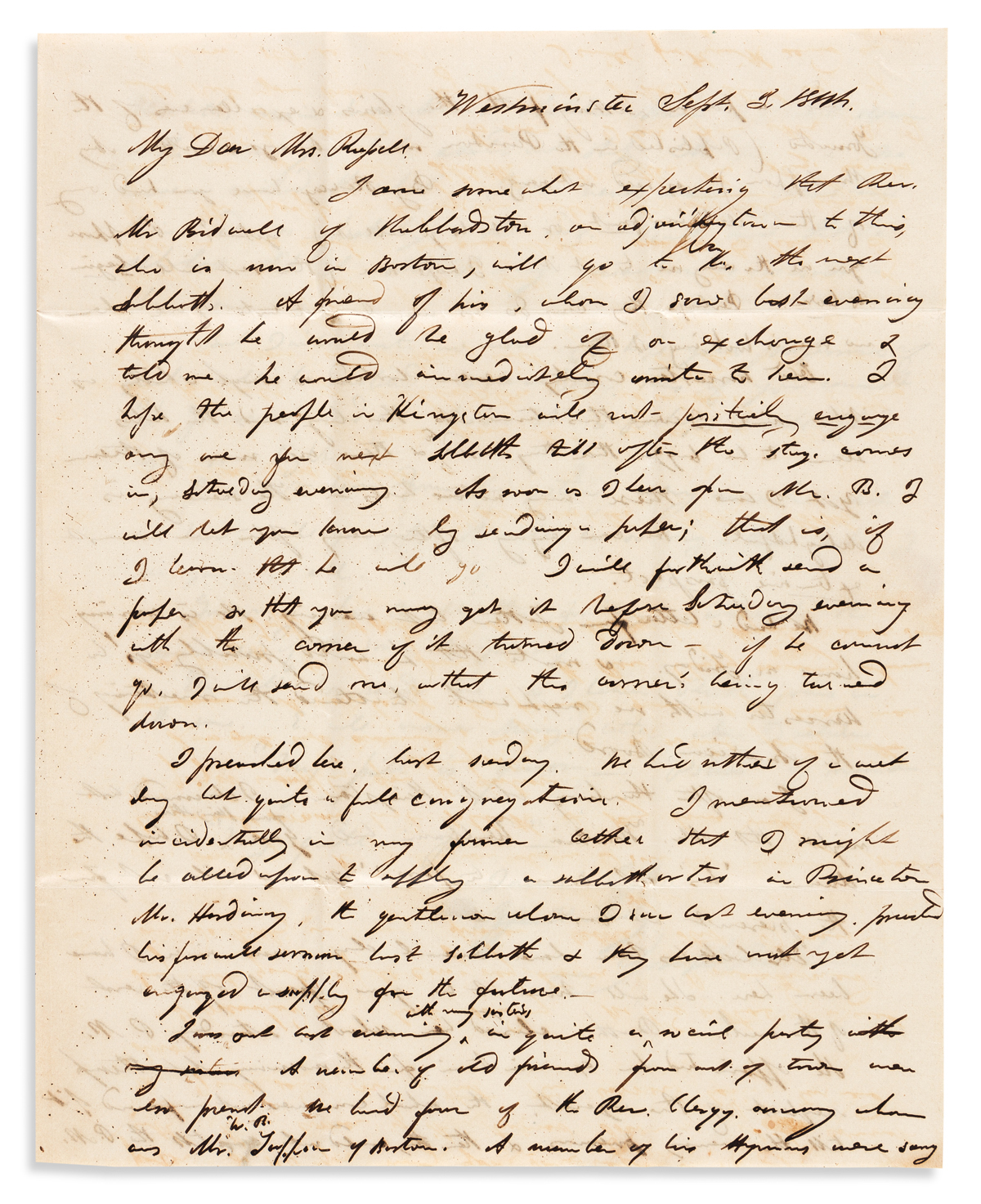