The feminist icon Gloria Steinem (born 1934) was born in Toledo, OH, graduated from Smith College in 1956, and gained increasing fame as a journalist and activist through the 1960s and early 1970s. One of her best-known speeches was "Living the Revolution," a commencement address at Vassar College which she delivered on 31 May 1970: "Women's Liberation is not destroying the American family, it is trying to build a human, compassionate alternative out of its ruins. . . . Women have a special opportunity to live the revolution. By refusing to play their traditional role, they upset and displace the social structure around them. . . . You don't have to play one role, in this revolutionary age above all others. If you're willing to pay the price for it, you can do anything you want to do. And the price is worth it." The speech has been frequently reprinted and anthologized. Offered here is an original 13-page staple-bound typescript, apparently prepared for publication. 7 of the pages have pencil corrections, very likely in Steinem's hand. The typescript, on Sphinx Erasable bond paper, is undated and unsigned, but appears to date from the early 1970s. The earliest publication of the speech we can trace, in the 1970 Congressional Record, has a passage reading "Internalized Aggression has for years been evident in Negroes." This typescript on page 8 has a pencil correction changing "Negroes" to "black people"--a change which is followed in all subsequent appearances including a 1972 textbook, "The Rhetorical Dialogue: Contemporary Concepts and Cases."
The speech is accompanied by several Steinem family letters and documents: A manuscript school essay by sister Susanne Steinem Patch (1925-2007) discusses her family and particularly her sister: "Gloria's such a loving little sister. Last year I had a throat infection for two weeks. Gloria pretended she was my nurse and scarcely left me all day long in case I should want something." 2 pages, 12 September 1941 Letter Signed from "Gloria" to relatives "Janey and Bob"--possibly her aunt Jeannette Nuneviller Brand (1900-1964) and uncle Robert E. Brand of Toledo, OH. Discusses her breakup with fiancé Blair Chotzinoff "as of last month": "The harder I tried to go ahead with plans, the more depressed and suffocated I felt until there was simply nothing else to do but say no." She also discusses plans for a pending fellowship in India, and adds: "Good news, Janie. I've cut my hair . . . very short! It doesn't even touch my collar and I feel shorn and defeminized but everybody else likes it so perhaps you would too!" Np, "Sunday a.m." [late 1956] Letter Signed from Gloria Steinem's ex-fiancé Blair Chotzinoff to her mother Ruth Nuneviller Steinem. A farewell letter written shortly after the breakup: "I cannot understand what Gloria has done but neither can I fight it with any weapon at my disposal. I sincerely believe that we two possessed the rarest gift to be offered two human beings and I am desolate that she should wish to sacrifice it for something so abstract that she can't even describe it to me adequately." Includes a forwarding note in the margin, possibly by Ruth to her sister Jeannette, emphasizing its confidentiality: "And you certainly never saw this one. Remember to forget." Np, 14 August 1956 Letter Signed from father Leo Steinem to Gloria. Discusses his new contract to promote a singer named Scotty Romano, said to resemble Elvis Presley. Adds that in the event of his death, "I have a beautiful and intelligent daughter by the name of Gloria who can take over in my place." It includes a forwarding note on verso signed "R" (apparently mother Ruth Steinem), possibly to her sister Jeannette: "What do you think of Gloria's Indian venture? The more books I read the more interested I become." [Marietta, GA], 4 October 1956 Letter from the University of Toledo to Gloria Steinem, thanking her for a scholarship gift. Toledo, OH, 25 May 1962 Smith College commencement program, 1971 Smith College commencement concert program, 1977. 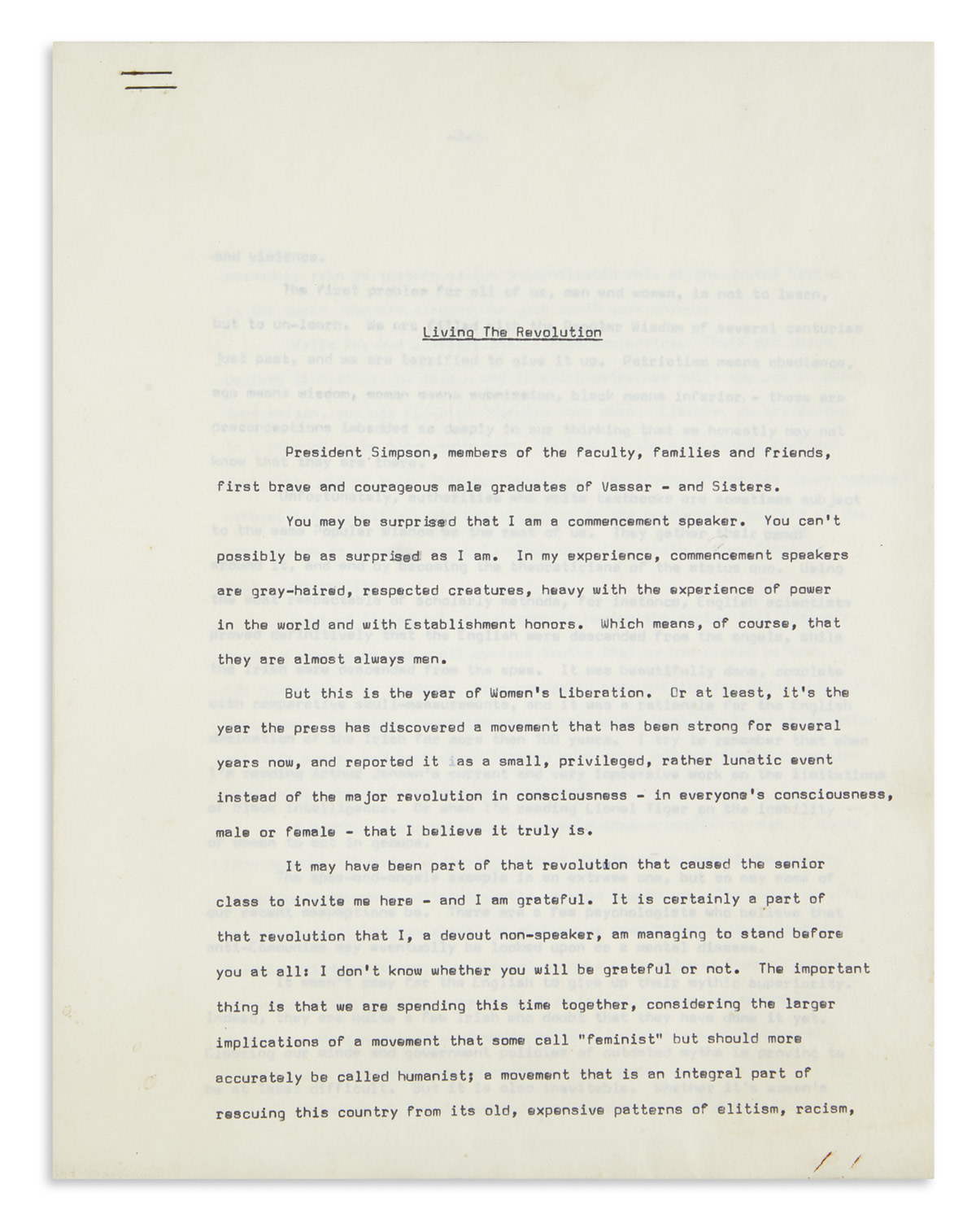