This significant Henry Ossawa Tanner painting has a remarkable provenance as it has been passed down through the descendants of James Joseph Haverty (1858 – 1939), its original purchaser. Haverty was an important Atlanta businessman, art patron and the organizer of paintings exhibitions with Grand Central Galleries at the Biltmore Museum in Atlanta which led to the founding of the High Museum. He purchased At the Gates and The Road to Emmaus from the Grand Central Art Galleries, New York, NY in July 1929 for $1,250. Haverty was an important patron of Tanner's - he owned five paintings by Tanner. This painting remained in his family's collection and passed from his descendants to the current owner. Haverty and Tanner also corresponded about this painting and its title in a series of letters between July 1929 and January 1930, now in the Archives of American Art (Tanner papers, Box 1, Folder 23, Archives of American Art).

This beautiful nocturne is a significant work and one of Tanner's later interpretations of his important series of paintings depicting the Holy Family's flight into Egypt. At the time of Tanner's second trip to the Holy Land, in 1898-99, Tanner began painting his intepretation of the Biblical story. It soon became a favorite subject of the artist - a depiction of the Mary, Jesus and Joseph escaping on a donkey under the cover of night. According to Dewey Mosby, Tanner had already painted four or five different versions by 1909. Today at least fifteen known examples, dated between 1899 and 1932, are known, including works in the Detroit Institute of Arts (1899), the Cincinnati Art Museum (c. 1907), the National Museum of African-American History and Culture (1916), the Museum of Fine Arts Houston (1921) and the Metropolitan Museum of Art (1923).

Flight into Egypt was also a popular subject for Tanner with American collectors. Tanner's depiction of the Holy Family's clandestine escape (Matthew 2:12–14) shows his interest in the narrative of escaping persecution found in the history of many African Americans' pursuit of freedom. This painting shows a scene of the beginning of their departure, illuminated by Joseph's lantern, with Mary not yet seated on the donkey. The 1923 Flight into Egypt in the collection of the Metropolitan Museum of Art is closely related and depicts the group shortly thereafter - walking past similar stuccoed buildings and arched doorways. This tonal and painterly canvas is part of a larger group of nocturnal scenes painted between 1900 and the 1920s. Tanner's mature canvases are characterized with broad painterly passages, richly layered surfaces and glazes of cerulean and cobalt blue. Mosby pp. 72-73; Marley p. 163, 188 and 288.
Set Alert for Similar Items 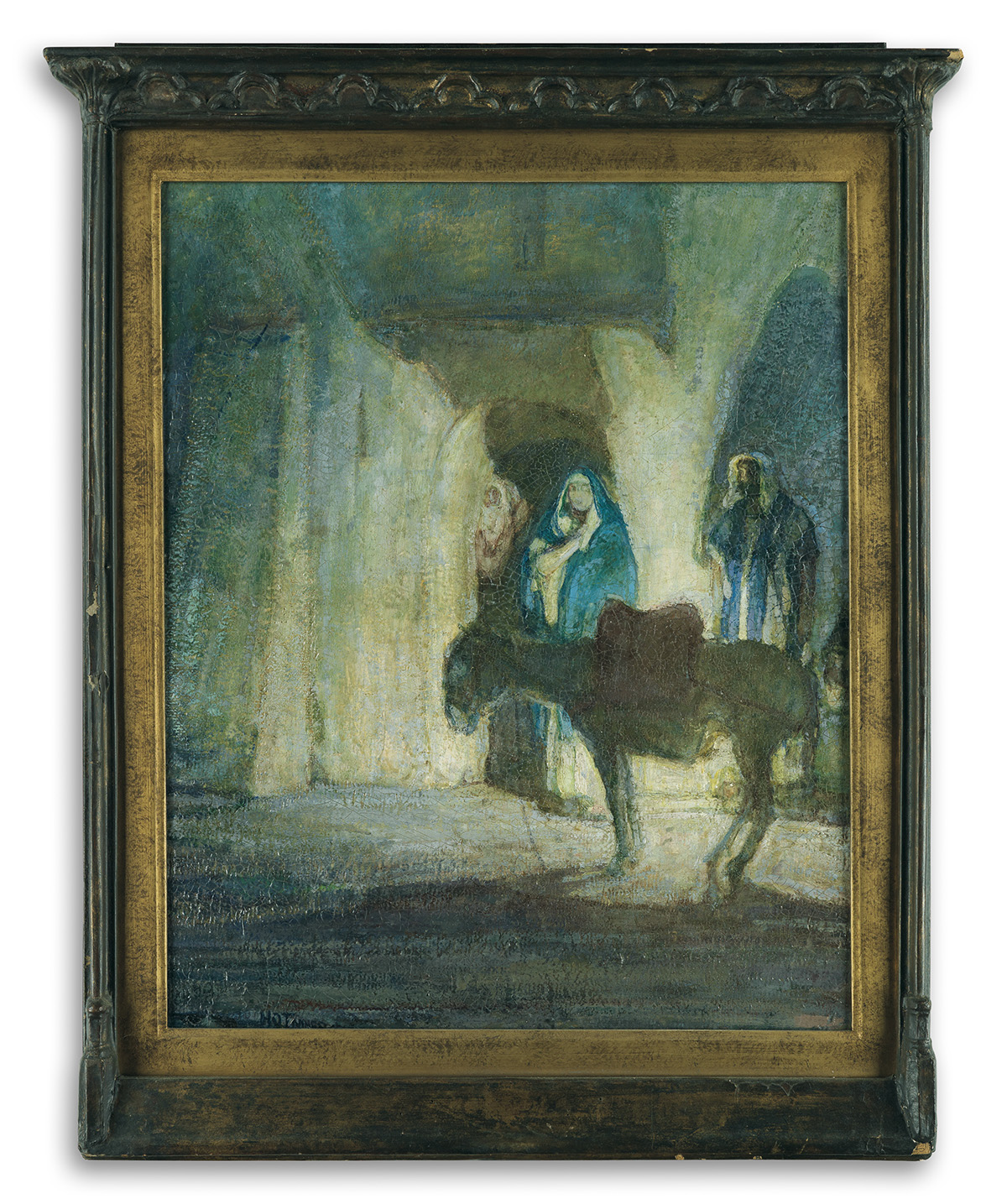