Etching and drypoint printed in black on warm, cream Japan paper, 1879-80. 202x295 mm; 8x11 3/4 inches. Second state (of 5). Signed with the butterfly and inscribed "imp" in pencil, lower left. Inscribed "Paris Memorial Ex, finest known" in pencil, verso. A brilliant, luminous and richly-inked impression with drypoint throughout and with selective wiping to dramatically highlight the horizon; the gondolas drawn entirely in drypoint and printing strongly and with the streaks of drypoint in the sky and water printing velvety black, consistent with the earliest impressions of this print.

This impression was probably exhibited at the 1903 Paris memorial exhibition of Whistler's prints, which was followed by the "Memorial Exhibition of the Works of the Late James McNeill Whistler," London, 1905, sponsored by the International Society of Sculptors, Painters, and Gravers (Whistler was a founding member of this group and its first president). There was also a memorial exhibition of Whistler's prints in Boston in 1904.

This is likely one of the first etchings Whistler made for the Fine Art Society on his arrival in Venice in September 1879 and also one of his most celebrated views of the city. With its focus on the water and the island of land 'floating' on a high horizon line in the hazy distance, this sets the tone for many of Whistler's Venice prints. This was a watershed moment for Whistler, coming out of financial ruin and producing a body of etchings that would secure his international fame. As Getscher points out in The Stamp of Whistler, 'Nocturnes had caused Whistler's misfortune; they would provide his salvation,' p. 95.

The view is across the Bay of Venice from the Riva degli Schiavoni, where Whistler was lodging, with the island and church of San Giorgio visible in the distance at the entrance to the Grand Canal. The view is reversed, with the church of the Redentore on the left, because Whistler probably drew directly on the plate from nature.

The earliest impressions, like this printing, show heavy chiaroscuro and a soft glow of light from the tall-masted ship. This is one of the plates from the "First Venice Set,' with a profusion of delicate drypoint lines, that did not hold up well to printing. In order to achieve the 100 impressions called for by the Fine Art Society contract for the edition, Whistler usually left a thinner, more broadly-wiped film of ink (bistre or sepia in tone) on the plate. The later pulls lack the velvety richness of ink applied to this impression. Those printed after his return to London are normally on cream laid paper, trimmed to the plate mark and signed with a small butterfly, as opposed to this impression on Japan paper with untrimmed margins and with the large, shaded butterfly signature in pencil. Kennedy 184. 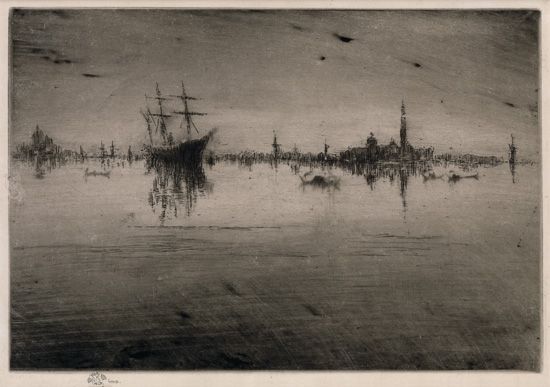