Jacob Lawrence (1917-2000) first came to national prominence as an artist in 1941 with his 60-panel Great Migration series. He was drafted into the Coast Guard in 1943 and served in public affairs aboard the ship Sea Cloud, the first integrated warship in the United States since the Civil War. Lawrence produced approximately 48 paintings for the Coast Guard during this period, capturing the spirit of men at sea. In October 1944, the Coast Guard collaborated with the Museum of Modern Art in New York on a Jacob Lawrence exhibition, which featured the entire Great Migration series and 8 of his new Coast Guard paintings. Almost the entire body of his Coast Guard output is now lost.

Offered here are 14 promotional photographs of these Coast Guard paintings. Most notable are photographs of 5 paintings which did not appear in "Jacob Lawrence: Paintings, Drawings, and Murals, a Catalog Raisonné" by Nesbett and Dubois in 2000--in other words, their existence was not otherwise then known to Lawrence scholarship, although a file has since been located at the National Archives. These are titled "Checker Game," "Handling Line," "Machinist Mate," "Worship," and "Wrestlers." Of these 5, one ("Handling Line") was later reproduced in John Ott's article "Battle Station MoMA: Jacob Lawrence and the Desegregation of the Armed Forces and the Art World" in American Art 29:3 (Fall 2015). These five paintings do not appear to have been included in the MoMA exhibition. Each had a typed caption from the Coast Guard's Public Information Division laid down on verso, with a few sentences of description interpreting the painting and extolling Lawrence's importance. For example, the caption for "Machinist Mate" (illustrated) reads "A Coast Guard machinist's mate solders wire in the engine room of a Coast Guard-manned troop transport in this impressionistic watercolor by Coast Guard Combat Artist Jacob A. Lawrence of Brooklyn, N.Y. The brilliant young Negro artist has caught the cramped working conditions and the feeling of machinery in this bold depiction of life aboard ship." "Handling Line" similarly shows Coast Guardsmen examining their lines for signs of wear. "Worship" depicts a "service in the Jewish faith aboard a Coast Guard-manned troop transport. His pulpit is marked with the Star of David." "Checkers" and "Wrestlers" depict recreational activities to break the shipboard tedium; one of the checker players sports a prominent tattoo and has his cigarette precariously balanced on a stack of game pieces.

Even more than with most artists, a Jacob Lawrence reproduction without color is hardly a substitute for the original--but for some of these paintings, it may be all we have.

7 of the photographs ("General Quarters," "Holy Stoning the Deck," "Officer's Steward," "Prayer," two different paintings titled "Recreation," and "Signal Practice") have shorter title labels from the Coast Guard, short exhibit labels from the Museum of Modern Art, and stamps indicating that the photographs were shot by MOMA staff photographer Soichi Sunami, presumably to publicize the October 1944 exhibition. These are 7 of the 8 Coast Guard paintings which were displayed at MoMA. Similarly, photographs of "Anchor on Cart" and "Bakers" show paintings which have been reproduced elsewhere, even if the originals are unknown. 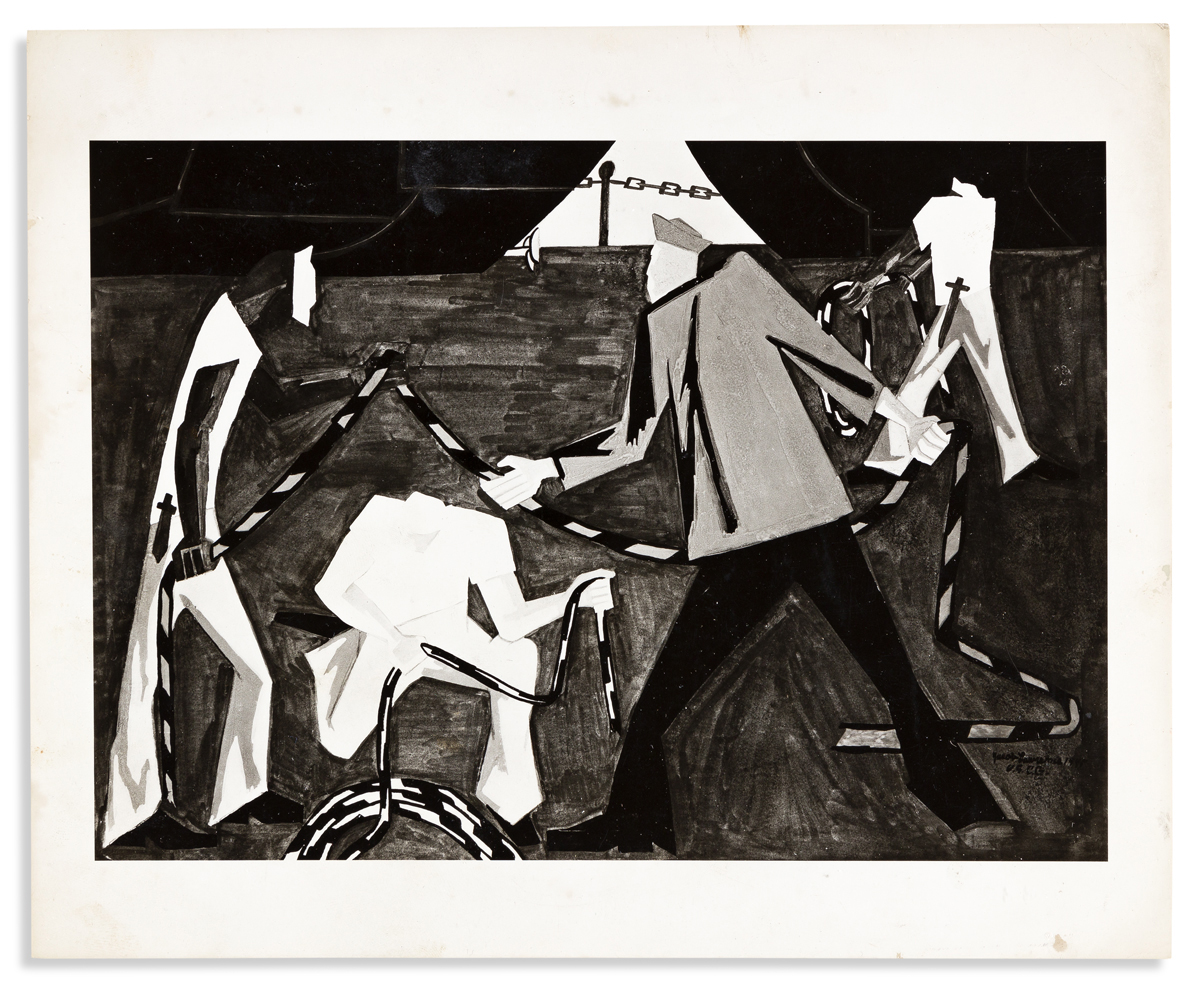