The archive documents the long push to create a memorial at Kill Devil Hill in Kitty Hawk, NC, the site of the first flights by the Wright Brothers. It is the personal correspondence file of Senator Hiram Bingham III (1875-1956) of Connecticut, the famed explorer of Machu Picchu who later went into politics. Often the letters to Bingham are paired with his carbon copies of his typed responses. Many of the letters are from Lindsay Warren, a North Carolina member of the House of Representatives who also took an interest in the project. The first letter here is Warren's introduction, after learning that they had both sponsored similar legislation in their chambers on the same day. Warren's 19 September 1927 letter names the members of the Kill Devil Hills Memorial Association, including popular pilots Byrd and Lindbergh, as well as the semi-obscure former Assistant Secretary of the Navy, Franklin D. Roosevelt. Other correspondents include Herta Junkers, a German woman who headed the American division of her family's Junkers aircraft manufacturers; federal budget director Herbert Lord; numerous officials in the War and Navy departments; and especially William J. Tate, superintendent of the Lighthouse Service and a strong supporter of the project.

William Oscar "W.O." Saunders of Elizabeth, NC headed the Kill Devil Hills Memorial Association. He was a local newspaper editor renowned for courting controvesy, often on the right side of history--he spoke out against lynching and anti-Semitism. His letter of 12 December 1927 announced that the association has secured 200 acres for the memorial. Later, Saunders published an editorial denouncing the memorial plan and Senator Bingham's role in the project, so Bingham sent in his letter of resignation from the commission. Congressman Warren sent Bingham a letter of apology on 28 February 1929: "Mr. Saunders . . . says anything that might at the time be on his mind. I know of no one that has escaped his shafts including myself. He would walk in your office tomorrow morning and greet you with the utmost cordiality and friendship. He has long since stopped having enemies in North Carolina." You may know a "loose cannon" like this in your own life. In response, Saunders announced his own resignation as president of the Memorial Association.

J.F. Victory wrote on 2 November 1928 with a design for the site's plaque (photograph included). He had included a winged propeller logo at the bottom, explaining that "this is an original design with this firm." Stapled to the photo are Bingham's notes, suggesting that the National Aeronautic Association logo be used instead, and then when told that might delay the project a week, "approved leaving insignia off." The plaque which remains at the site today is identical to this photograph--except that the logo has been removed.

Three eyewitnesses were brought to the site to determine the exact spot where the first flight lifted off in 1903. A photostat of their signed affidavit is included. The logistics for a special 200-person dedication weekend are also discussed--the area was not then served by roads, so a special steamer was necessary. Bingham fought to keep the memorial separate from any attached projects for lighthouse, beacon tower, or Coast Guard facilities.

Most of the letters date from 1926 to 1929. A smaller group dates from 1932 to 1934, with Bingham in his role as president of the National Aeronautic Association (he left the Senate in 1933). The memorial was officially dedicated on 19 November 1932. A carbon of a letter to Amelia Earhart urges her to attend: "If you can possibly find it practicable to change your speaking engagement, it would be most fitting and proper for you to accept the invitation to officiate at the unveiling. . . . The matter is urgent and of great important to the War Department." The day after the ceremony, lighthouse head W.J. Tate recounted the behavior of the guest of honor at length: "Orville Wright ran true to form, looked bored and kept silent during the official glitter." Wright was on the program for the official luncheon but stayed at Kill Devil Hill with a few locals "who knew him in the old days of struggle . . . and honestly, if he didn't enjoy himself his looks belied his feelings." He only showed up at the luncheon after the other guests had eaten and left. Tate also bemoans that the original Wright Flyer--"the greatest souvenir of the greatest epoch-making event in all the history of the human race, lies in a foreign museum" (see the previous lot, from a different consignor).

In addition to the correspondence, a file of photographs includes copy prints of historic 1901-1903 photographs and original photographs of ceremonies in 1928 and 1932. Ephemera include a sounding map of the Outer Banks area, annotated to show the coverage of nearby lighthouses for the Kitty Hawk site; an 8-page pamphlet, "Kill Devil Hills Memorial Association, Its Genesis and Its Aims," circa 1927; and a printed program for the 17 December 1928 pilgrimage event. 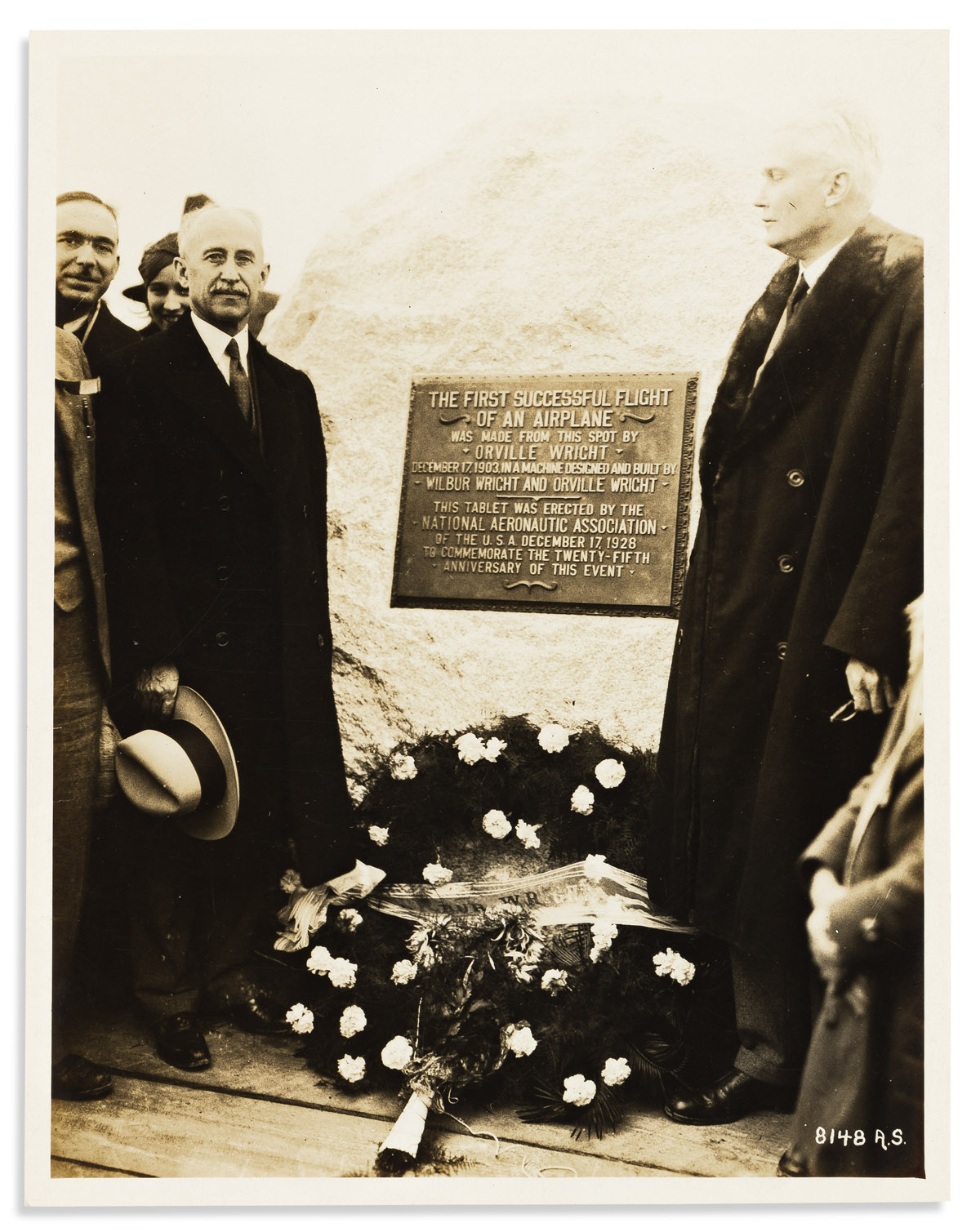