William Addison "Bill" Price (1915-2009) was discharged as a United States Navy bomber pilot after World War Two, and became a reporter for the New York Daily News, where he convinced the paper to acquire a military surplus plane to take aerial photographs. He also bought a series of surplus planes for his own personal use and became interested in what he termed "the synoptic eye," discerning the patterns shaping American life which could only be seen from above. He became inspired by a 1953 book by George Stewart, "U.S. 40, Cross Section of the United States of America," and later recalled his desire to "take a sample of the whole country all the way across, but it needed something to hold it together and Highway 40 seemed the way to do it." Price's ultimate plan was a massive illustrated book showing the nation from sea to sea--although he never secured a book deal. A committed progressive, his unofficial theme songs for the project were "America the Beautiful" and Woody Guthrie's "This Land is Your Land."

U.S. Route 40 then stretched across the continent from Atlantic City, NJ to San Francisco, CA, passing through 14 states. It traversed major metropolitan areas such as Baltimore, Columbus, Indianapolis, St. Louis, Kansas City, and Denver, as well as long stretches of farmland, and the Appalachian and Rocky Mountain ranges. The route superseded important early routes such as the National Road (launched in 1811) and the 1921 Victory Highway, and parts have since been replaced by sections of interstate highways I-80 and I-70. The portions which remain are still known as the "Main Street of America." If you have travelled widely in the United States, you have almost certainly spent some time on this road.

On 18 August 1954, Price and his friend Bob Bedell took off from Pennsville, NJ in a surplus Consolidated Vultee L-13 and headed west as far as daylight allowed each day. They reached the Golden Gate Bridge in San Francisco 24 days later, having taken 938 exposures. Price sold the plane and camera, and returned to New York. Hoping to fill in some gaps, he bought another surplus plane and camera (a Stinson L-5 and a Keystone F8, respectively) and left with friend Jane Hogg on 22 September 1955. This 18-day trip faced weather and mechanical challenges and got no further than Kansas before turning back to New Jersey, but added another batch of photos to his file.

These photographs--and the epic project behind it--are wonderfully described in a January 2000 article in the Smithsonian's Air and Space magazine by John Fleischman, "A Flight Along America's Highway: One Man's Mid-Century Portrait of the United States--from 1,500 Feet," for which Price was interviewed at length. Why did Price undertake this challenging project? "I've been trying to figure that out myself. . . . I think it's something like, I'm in love with America. I know that sounds kind of crazy 'cause I'm very critical of what the U.S. is doing these days, but get away from the cities and the political centers, then you can see the land and what kind of impact we've had."

Price lost almost all of his negatives and detailed trip logs in an apartment fire in 1994. Offered here are his nearly complete file of contact sheets and large prints, which were not affected by the fire: 232 sheets of contact prints (including occasional duplicates), each 14 x 11 inches, with 4 worn binder punch holes along the left edge sometimes extending slightly into the images; most sheets have at least minor to moderate edge wear, some with crop marks in red pencil; housed in a period briefcase hand-lettered "William A. Price Aerial Photography." Most sheets have 6 images, some have fewer. Reference numbers are written in the negatives of the margins of each image, but not dates or locations. The original logbooks are lost, so determining the locations of each image would be a substantial piece of detective work. Photocopies of 5 scattered log pages do survive, covering 95 different images, showing the time, altimeter reading, and a short caption for each; these will provide a good starting point. The negative reference numbers are nearly complete from 494 to 1856, with eight sheets from the sequence apparently missing; a note explains that one was given away in 1988. The set of contact sheets is accompanied by additional prints and supporting documentation:

Approximately 200 photographic prints of aerial views, most about 14 x 11 inches, a few smaller. Most of these are apparently from Price's 1954 and 1955 Route 40 trips, and from a 1953 trip to Iraq and Syria, and at least one is from a 1951 trip to West Virginia. A small number bear Price's inked credit stamp on verso, but most are uncaptioned and uncredited. 4 of them are mounted on board.

19 sleeved negatives with typescript dates, numbers, and captions which survived the 1994 fire, though the sleeves show light smoke exposure. All are dated 17 August 1954, between Havre-de-Grace and Ellicott City, MD.

Printed material, including: Price's copy of George R. Stewart's 1953 book "U.S. 40, Cross Section of the United States of America," which served as a partial inspiration for the project, in worn dust jacket with tape repairs; January 2000 issue of Air & Space magazine featuring article on Price; folder of clippings on aerial photography and related subjects, most circa 1955-56.

A hard drive with scans of the contact sheets.

Finally, and perhaps most importantly: Keystone Aircraft-Type F8 model camera with a Wollensak 15-inch lens, wooden handles, and viewfinder, approximately 13 x 14 x 15 inches; minor wear including a bit of paint flaking, apparently in good repair but functionality not tested. This was the camera used for Price's shorter second Route 40 expedition in 1955. 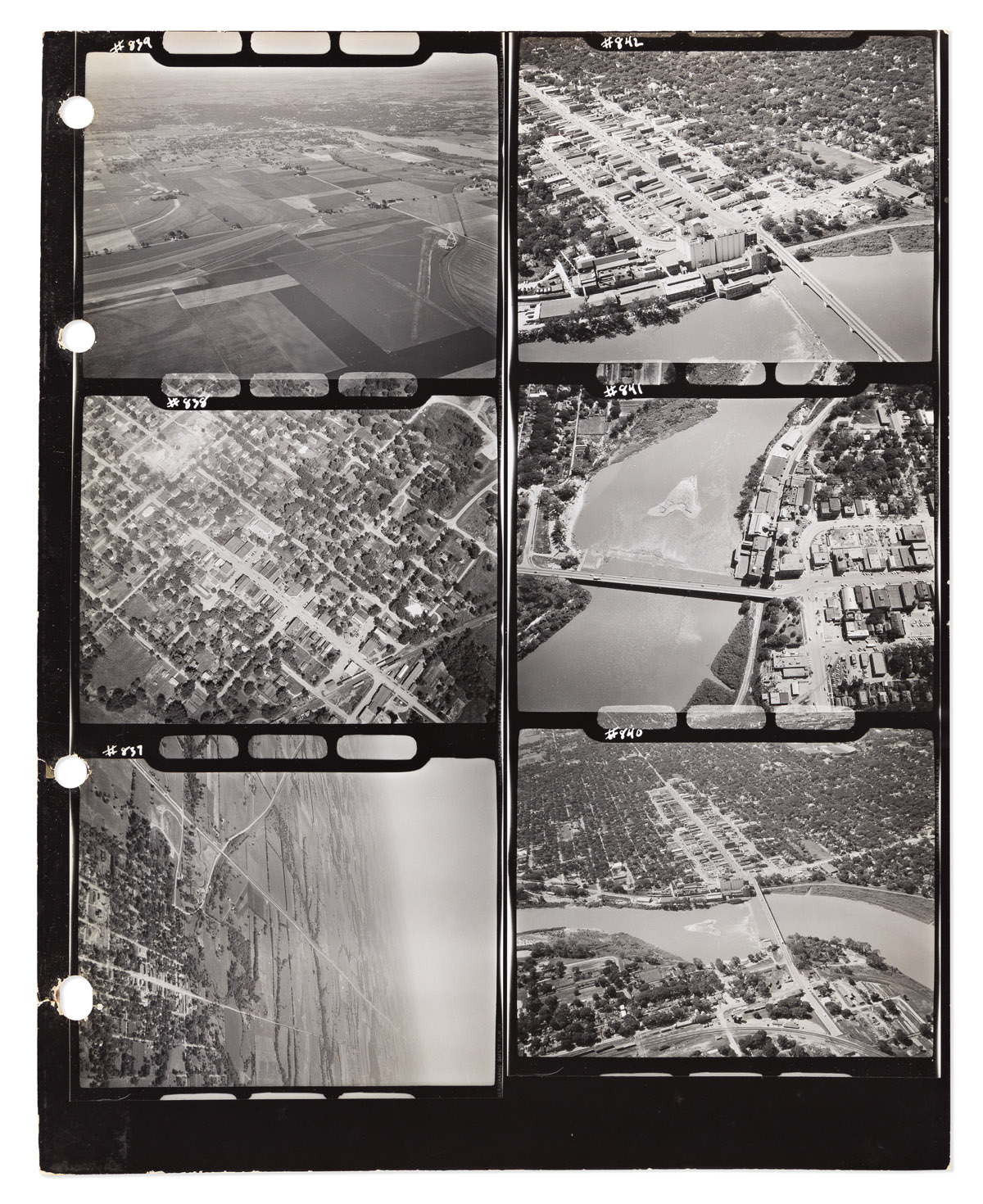