Union cavalry colonel Ulric Dahlgren (1842-1864) and General Judson Kilpatrick launched a daring raid deep into Confederate territory on 28 February 1864, in an attempt to enter Richmond. On 3 March, Dahlgren was killed and most of his small command captured. Found on his body were his orders to burn mills and boats en route to Richmond, and release Union prisoners held there: "The prisoners loose and over the river, the bridges will be secured and the city destroyed . . . & Jeff. Davis & cabinet killed. . . . Everything on the canal & elsewhere of service to the Rebels must be destroyed." Adding to the historical resonance, another doomed cavalry leader is mentioned in the closing sentence: "As Gen. Custer may follow me, be careful not to give a false alarm."

This captured letter and other documents quickly made its way up the Confederate chain of command, were circulated widely in the North and overseas, and remain one of the unsettled controversies of the war. Was this an authentic order or a forgery created for propaganda purposes? If authentic, how far up the Union chain of command did it go--was it a wild initiative of Dahlgren and Kilpatrick, or was Secretary of War Stanton involved, or did knowledge extend all the way to Lincoln? And what became of the Confederate file containing the original letter? It is often assumed that Stanton quietly destroyed the file shortly after the war, although no evidence exists.

While the letter was originally spread in transcript form, Union skepticism led Confederates to have photographic copies made for distribution. On 5 February 1864, Richard S. Sanxay and Adolph Gomert of Richmond, VA had received Confederate patent #227 for a "Photographic Process for Duplicating Maps." Working together at the Confederate Photographic Engineer Bureau, they produced numerous maps for battlefield use. By 23 March 1864, the Richmond Sentinel was announcing plans to photograph Dahlgren's plans and distribute them in Europe. On 1 April 1864, Robert E. Lee wrote to Union General Meade about the Dahlgren Affair, hoping to determine whether the plan to assassinate Davis had official sanction: "To enable you to understand the subject fully I have the honor to inclose photographic copies of the papers referred to, one of which is an address to his officers and men, bearing the official signature of Colonel Dahlgren, and the other, not signed, contains more detailed explanations of the purpose of the expedition and more specific instructions as to its execution." Sanxay and Gomert billed the Confederate Engineer Service for making more than 200 copies of "Dahlgren's letter" between 16 April and 1 June. The present copy is headed in manuscript "Photographed in office Top[ographical] Dep't D.N.V. [Department of Northern Virginia], Capt. H.H. Campbell, P. Engrs. in charge, Sanxay & Gomert's Patent." On verso, it is docketed "Photographic copy of instructions &c from originals found upon the person of Col. U Dahlgren U.S.A."

The alleged Union plot to assassinate Jefferson Davis has often been credited as a major factor in the radicalization of Confederate-leaning actor John Wilkes Booth. These photographs were the means by which that news was disseminated--and thus can be linked to the Lincoln assassination. The photographed letter and its importance are discussed extensively in Ron Field, "Silent Witness: The Civil War through Photography and its Photographers," pages 371-6, 458. See also the recent first biography of Dahlgren, Eric Wittenberg's "Like a Meteor Blazing Brightly," pages 200-201, 213, 242-7, which argues for the authenticity of the orders, and traces only two surviving photographs: at the National Archives and the Virginia Historical Society.

This may appear at first glance to be a later photostat, but it is an important artifact from 1864, with contemporary inscriptions. We trace no other copies of the famed Dahlgren letter at auction. 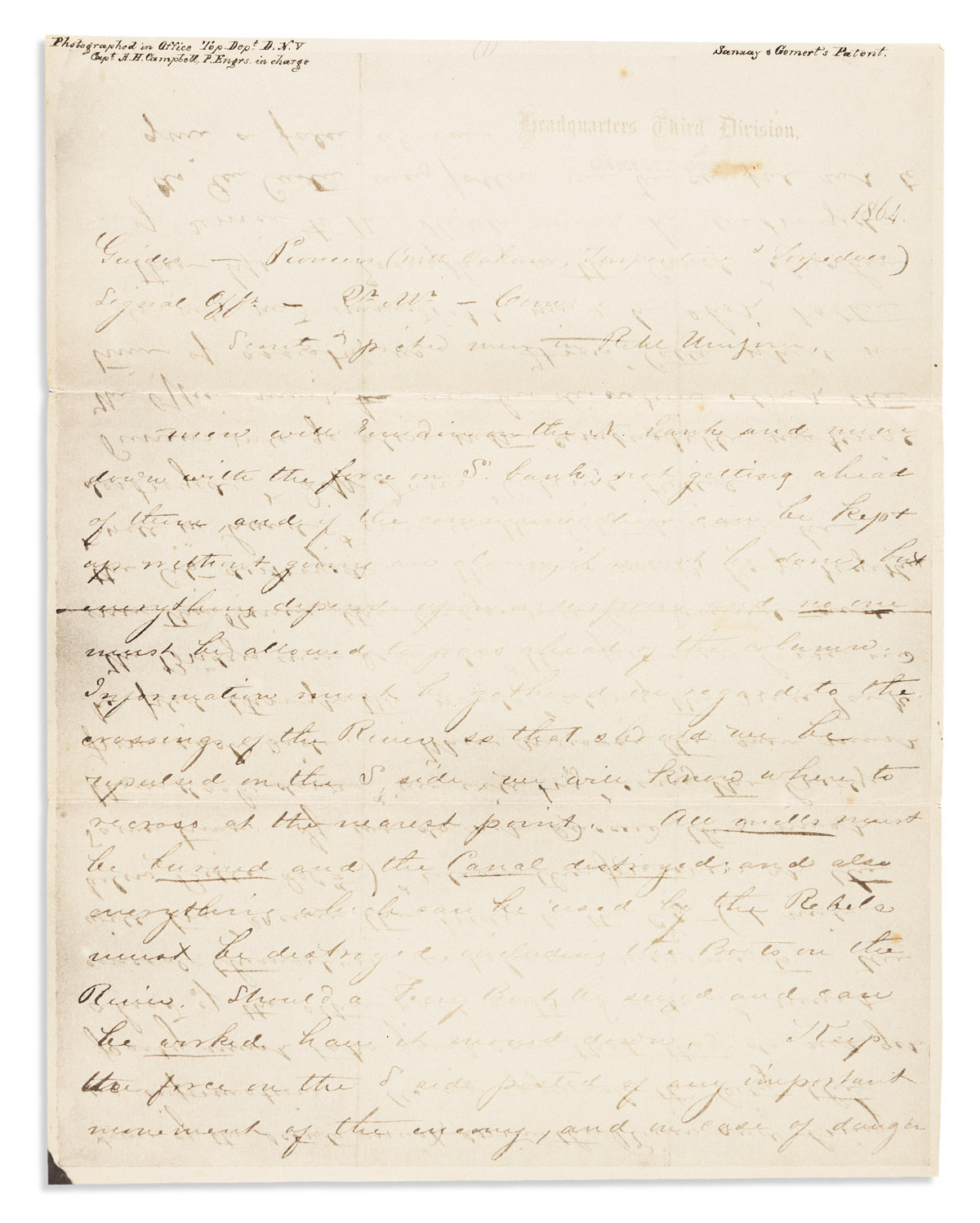 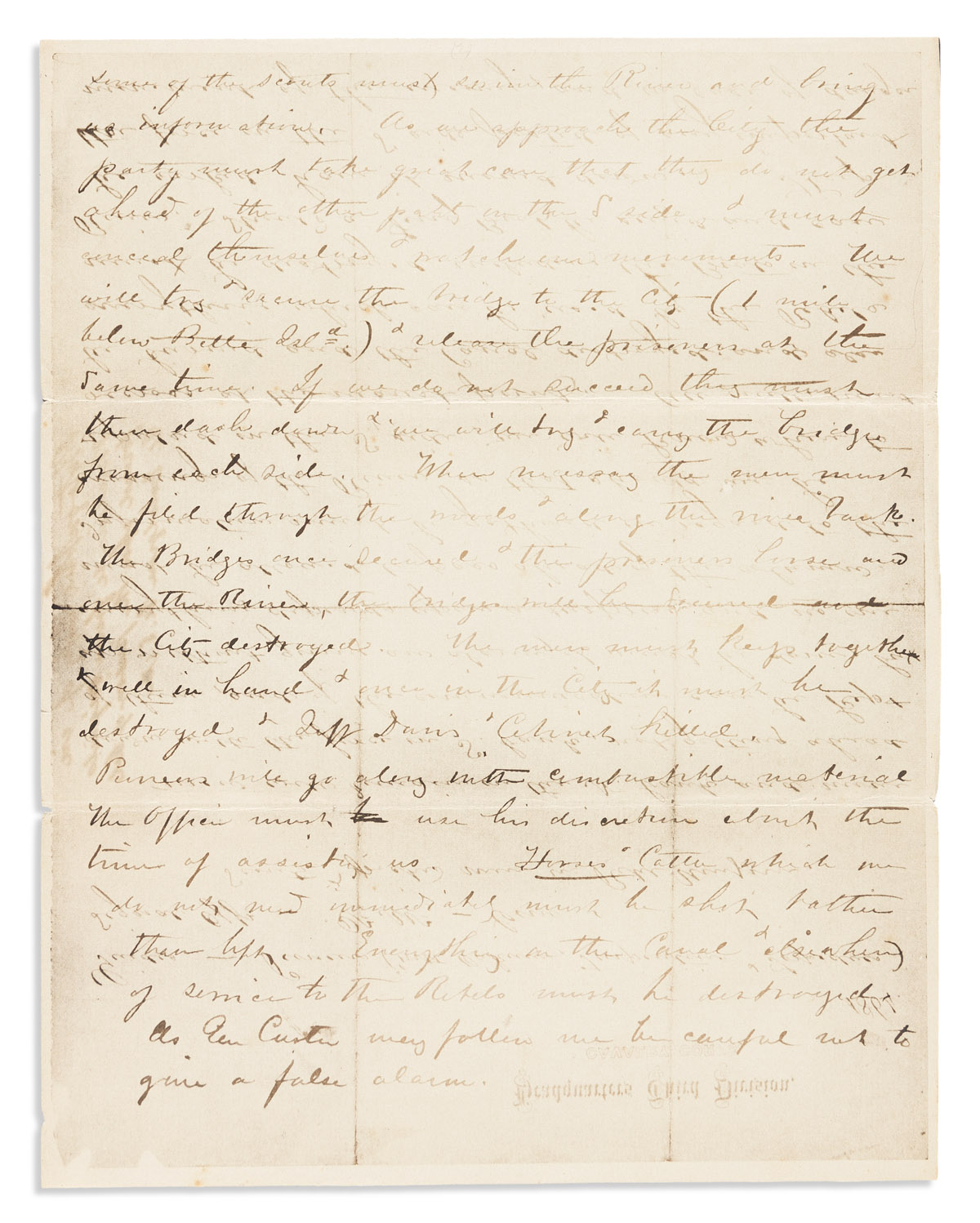