Price Realized: $ 8,500
Price Realized: $ 10,625
?Final Price Realized includes Buyer’s Premium added to Hammer Price
Estimate: $ 3,000 - $ 4,000
"I HAVE HAD ALL KINDS OF AMPUTATION TO PERFORM" (CIVIL WAR--MAINE.) Large archive of correspondence between regimental surgeon William C. Towle and his wife. 244 letters (1 linear foot): 170 from William Towle to his wife Anna, and 74 from Anna to William, most letters being 4 octavo pages or more; condition generally strong; many with the original envelopes, most stamps excised but postmarks mostly present. Vp, 1863-66
Set Alert for Similar Items

William Clement Towle (1830-1900) followed his father into medical practice in Fryeburg, ME, an inland town on the New Hampshire border. He served as the assistant surgeon in the nine-month 26th Maine Infantry from January to July 1863. In November he re-enlisted in the same role with the 12th Maine, staying on with the army until April 1866. These letters were written to his wife Ann Elizabeth Warren Towle (1828-1901), who remained in Fryeburg with their three young children.
Dr. Towle's initial term was spent in forts near Washington, where his men saw little combat. However, he did see the aftermath of one gruesome incident near Alexandria, VA: "The magazine in Fort Lyons exploded instantly killing twenty men & wounding fourteen more. It was a horrible sight, heads, bodies, arms & legs scattered in all directions & then the poor fellows who survived were so burned and mutilated that many of them must die" (10 June 1863). He also handled a smallpox outbreak in camp: "We have lost in all five cases of small pox, it being the confluent kind. I never wish to see another case. For all of the death scenes I ever witnessed these certainly were the most horrible. The features were enormously swollen and the flesh in many places dropping from the bones. And then that unearthly of all smells which emanates from the body, indescribable to any one who has never had actual experience" (24 March 1863).
In his second term of service, Dr. Towle was immediately sent to join the 12th Maine in Louisiana, arriving in New Orleans on 1 December 1863. He soon performed his first amputation, on a rowdy soldier who had taken a shotgun blast from a local merchant "in his right arm about 4 inches below the shoulder, mangling it terribly. I was called upon & after administering chloroform I amputated the arm about 2 inches below the shoulder. Every one present supposed he could not live. . . . He is now doing well" (11 February 1864). A full-page plan of Dr. Towle's hospital dated 23 February 1864 (illustrated) is a highlight of this period. The regiment was sent back to Virginia in July 1864.
Towle's nemesis was the regiment's head surgeon Elbridge A. Thompson, who Towle thought had only been promoted because he bribed the regimental officers with the medical whiskey (13 August 1864). Thompson played an inglorious role in the regiment's bloodiest engagement, at the Third Battle of Winchester: "I have more than 150 wounded under my charge. Our regt has been horribly cut up. . . . Dr. Thompson is under arrest for being drunk. What a disgrace to himself & the service. . . . I must close and go to work. I have had all kinds of amputation to perform" (21 September 1864).
The regiment also fought hard at Cedar Creek the next month, where Towle witnessed General Sheridan's famed dramatic arrival on the battlefield: "I am now at work in the division hospital dressing wounds and amputating. . . . The Rebs took our 8th Corps by surprise on our right, and drove them in completely, flanking our corps. Many of our men were obliged to jump over their own breastworks to avoid being captured by the Johnys. They had the best of it until about noon when the tide turned against them and they in turn were routed with great loss. Gen. Sheridan was absent in the fore part of the day. . . . He arrived on the field about noon and his presence everyone says was worth 20,000 men to us. I saw him as he was going onto the field and the men cheered him, for his presence seemed to inspire them with new courage" (21 October 1864).
Dr. Towle stayed on with his regiment for a year after the war, serving in the occupation of Georgia. He spent some of his time inoculating civilians in Savannah ("mostly colored individuals," 21 March 1865). Adding to the personal drama of the correspondence are the 71 letters Dr. Towle received from his wife Anna. Some of Anna's letters include small scraps of paper with scribbles by Dr. Towle's three young children, born 1859 to 1861. Some additional highlights from this important Civil War medical archive are available upon request.

with--15 other letters to Dr. Towle, 1862-63, including a letter from brother John W. Towle of the 6th New Hampshire Infantry, Fredericksburg, VA, 24 November [1862?]; and a letter from brother-in-law Orrin Warren, surgeon of the 33rd Massachusetts Infantry, regarding efforts to drive a "bummer" back to active duty: "I am bound not to be beat till every torture (medical) has been tried." Np, 2 March 1863 and 13 other Towle family letters, 1862-75. 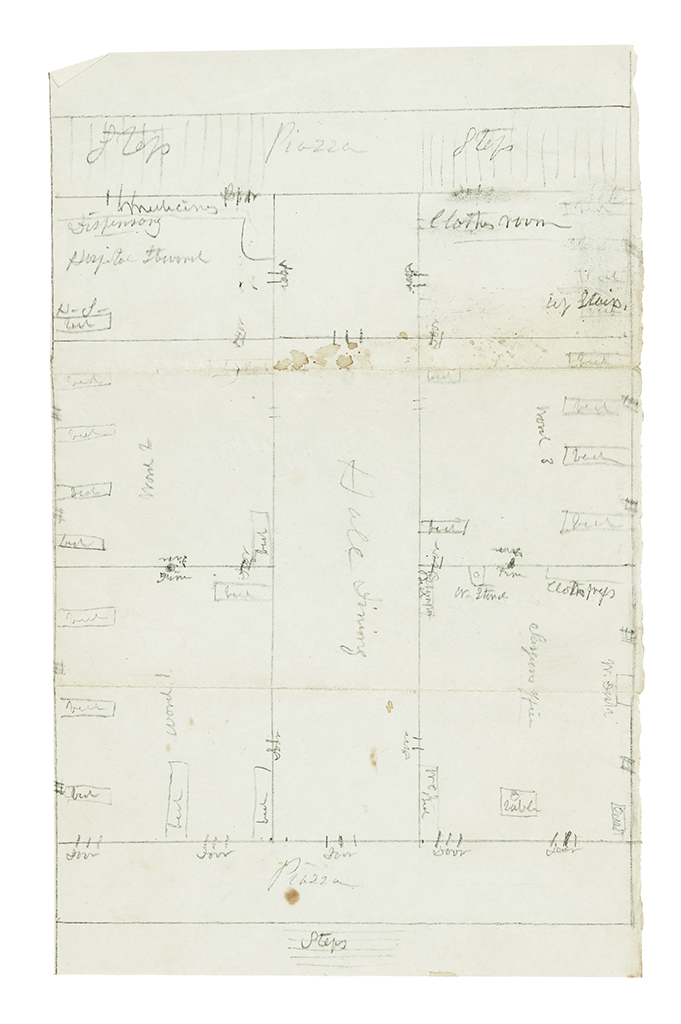