Paul Shirley (1820-1876) of Nashville, TN, was a career naval officer. The first of these two letters, written aboard the U.S.S. Macedonia on 28 March 1860, expresses strong Southern sympathies, although he would remain with the Union Navy during the war to come. He expresses his support for South-leaning presidential candidate John Breckinridge, and complains that "The d--d hypocritical Yankees who profess the doctrine of meekness, charity and the forgiveness of injuries do not hesitate to steal negroes, disregard the federal laws, purger themselves by swearing to maintain the Constitution, which they daily try to undermine, to use the sacred pulpit as a rendezvous to collect arms to shoot down slave owners, &c &c. They are fanatics, the maddest of fanatics, and will not stop until southern men resist by a rupture of the confederacy. When the time does come I shall offer my humble services to my state." He added his disdain for a celebrity politician who spent time on his ship: "We had the Hon. W. Seward on board of us for several days as passenger from Joppa to Alexandria. I met him in Jerusalem & elsewhere. He made a bad impression upon us all, even men from his own state."
The second letter was written in Panama aboard the U.S.S. St. Mary's on 13 March 1861, with several states already seceded from the Union and Tennessee soon to follow: "I am fully impressed with the importance of my commission to my wife & child, if not to myself, and that I do not mean to forfeit it lightly. . . . In the event of my state calling for its sons, I must respond to it, or die of shear mortification and grief. . . . State pride is felt by southern men to a degree that I am satisfied is not known to northern men, so there is no use arguing about it. I yield to no man in the loyalty to the flag I have honorably served . . . but when it comes to a family quarrel, I feel at liberty to take the side which I think is right. I love Pennsylvania as my adopted home & I want to live & die there, but if I am forced to give up my home there, I will . . . wage a bitter war against those who will be the cause of my doing so." He adds with a burst of frustration: "I have just organized a battalion of infantry in the expectation of having to land here and do something in the way of broken shins among these Jamaica negroes. Wouldn't I like to revenge myself on Cuffee for the trouble and anxiety his race have cost me at home." Shirley remained in the Union Navy, reaching the rank of Lieutenant Commander and helping to capture at least one Confederate privateer. After the war, he reached the rank of captain, and was brevetted as an admiral.
Accompanying the letters are two cartes-de-visite of Shirley in uniform, one taken by Bradley & Rulofson of San Francisco (illustrated), and the other by William Shew of San Francisco. 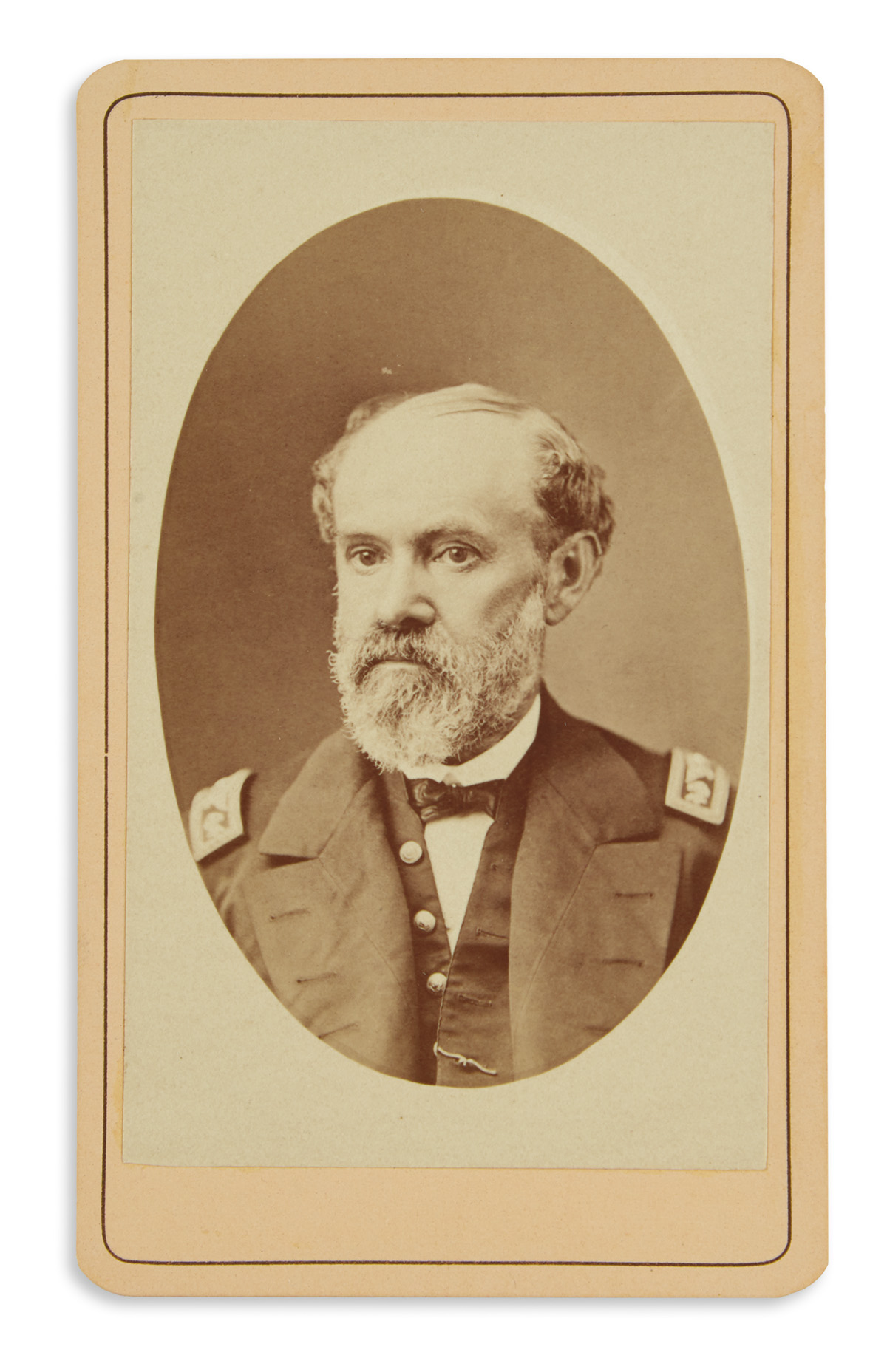