Samuel Walker (1835-1881) of Harwich, MA on Cape Cod was already a seasoned mariner when he enlisted as a Navy seaman in December 1861; he was discharged 3 years later as a yeoman. He came from a family with abolitionist leanings. His uncle Jonathan Walker (1799-1878) had been caught aiding a group of escaped slaves and was branded "SS" for "slave stealer" on his hand, which John Greenleaf Whittier immortalized in a poem.
This diary begins with Walker boarding the USS Kineo, a gunboat bound for the Mississippi River. Often operating in hostile territory, the ship saw regular combat action. The first real shooting was on 4 April 1862: "A rebel steamer came down. We gave her chase in company with Iroquois. We fired 14 shots at her from Parot gun, three striking her but not disabling her Fired 6 from pivot gun, they fell short. . . . Killed 2, wounded 7." 4 days later, "the Iroquois came around the point in the rebel steamer Star so sudden, she ran the Star ashore and set fire to her, and ran into the woods."
These small clashes paled, though, to the battle of 24 April 1862, when the Kineo and other ships fought their way past Confederate's Fort Jackson before dawn en route to New Orleans: "This day will long be remembered as the day on which the hottest battle was fought the world ever knew. . . . While sponging our pivot gun, a ball from the enemy passed through the body of Charles Kelley, striking the pivot gun, flying into hundreds of pieces, wounding myself [and 5 others]. Such as were able went below, the rest were carried below. . . . At daylight we were past the forts when the firing ceased, the whole fleet giving three hearty cheers, the wounded below joining, and then we proceeded up the river destroying several rebel steamers and a battering ram." The ship Verona took heavy fire and began to sink: "The crew still kept at their guns and fireing until the water drove them from the gun by the water running into their muzzles, when they took their boats and escaped with the wounded, leaving 3 dead on deck." New Orleans, the largest city in the Confederacy, fell two days later.
Long and dramatic accounts are also offered of the Battle of Baton Rouge (5 August 1862), the Siege of Port Hudson (20 May to 17 June 1863), and the Second Battle of Donaldsonville (28 June 1863). At an earlier fight near Donaldsonville, "the musket balls flew around us quite lively. William Swain was struck by one while sponging his gun. It struck him in the right breast and came out of his back on the left side just above the hip. He lived about fifteen minutes" (4 October 1862). Several Union ships attempted to pass Port Hudson on 14 March 1863. The Kineo was tied to another ship for the attempt: "A thirty-two pound solid shot struck the Monongahela, cutting away her wheel rope, and cut away our rudder post, thus disabling both our steering apparatus, and causing us to run ashore. The Monongahela drawing more water than ourselves, caught aground first. . . . After being ashore about half an hour, we succeeded in getting afloat and getting a hawser fast to the Monongahela to turn ourselves around, and succeeded in pulling her off. We then . . . drifted downstream, steaming first ahead and then astern to keep her off the bank. . . . We could then do nothing but drift, the rebels playing at us with artillery and musketry."
Walker had an interest in the fate of the enslaved people he saw in his tour, and recorded several incidents. "Some slaves attempted to run away on the opposite side of the river. Their owners came after them. They attempted to swim across the river. One they shot dead, one they wounded and he went into the river to escape them when he was drowned. Two swam across the river and were picked up and got clear. The other two were captured" (13 August 1862). Near Donaldsonville, "two colored men came on board, slaves. We shipped them. . . . Another slave came aboard when the boat went ashore" (2 October 1862).
After 18 months of continual action, in August 1863 the battered Kineo and its crew were sent north from New Orleans for repairs. On 1 September 1863, Walker wrote "So ends the journal of the first cruise of the U.S. Gunboat Kineo."
Even without the diary, this volume would be a very interesting memorandum book of naval service. It includes several lists of men and watches, apparently from the Kineo. Two pages are devoted to sleeve ornaments and shoulder straps on naval uniforms, and another page describes and illustrates naval signal flags. The volume includes several poems, most notably a possibly original 8-stanza composition titled "Port Hudson, Surrendered to Gen. N.P. Banks, July 8th 1863" which we have not traced elsewhere. It begins with a rousing "Hip hip huzza, a nation's thanks / Are due to our heroick Banks / Who with Port Hudson repossessed / Completes our triumphs in the West." A three-page log of a voyage from Cuba to Cape Cod aboard the ship Bell Rock appears to date from 1854, the earliest entry in the volume, followed by extensive ledger entries kept by Walker from 1858 to 1860. Post-war, the volume was used to track attendance and visitors at a school in 1868 and 1869.
A remarkably detailed and action-packed naval diary, and a significant resource on the campaign on the Mississippi. 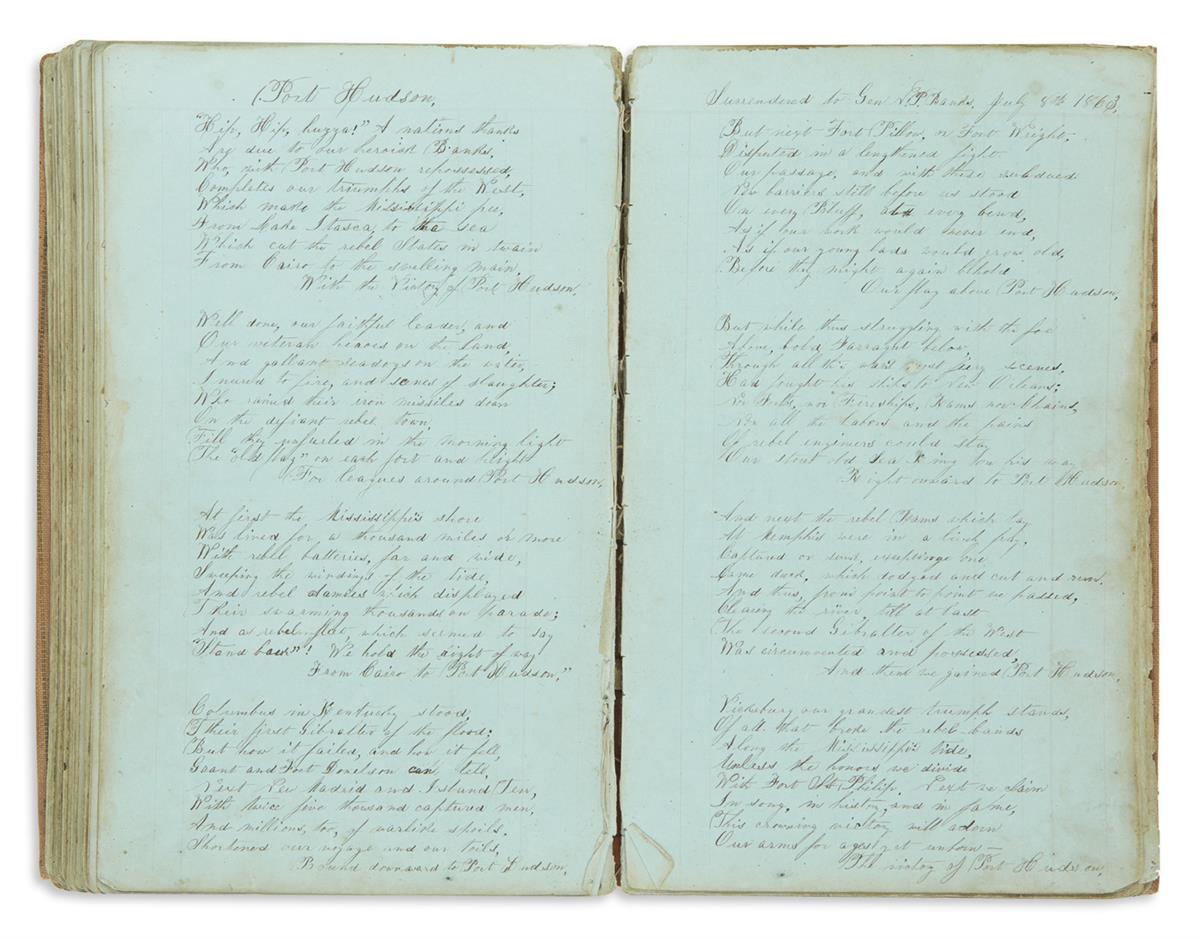