Franklin Murphy (1846-1920) of Jersey City had joined the 13th New Jersey Infantry as a private, and had risen through the ranks to 1st Lieutenant by the time he began keeping this volume. Many of the memoranda date from his regiment's participation in Sherman's siege of Atlanta and the subsequent March to the Sea.
The diary was written on the Carolinas Campaign, in which Sherman's army pushed north from Savannah into North Carolina, culminating in the Battle of Bentonville, one of the last major battles of the war. The marching was hard, with the massive army keeping up a brisk pace through rain and mud, leaving destruction in its wake, as Murphy describes vividly: "South Carolina . . . is a very poor country to travel in, particularly on foot in rainy weather. Wouldn't give 285 Mulberry St. for the whole state. Every house & almost every Negro shanty was burned to the ground" (6 February). From a mountain in Saluda, SC, he got a clear impression of the devastation being wreaked by Sherman's army: "As far as the eye could reach from south to north, the horizon was lit up with the reflection of fires, probably burning buildings. The camp fires of the whole army were also plainly visible" (17 February).
The diary also includes good descriptions of South Carolina towns like Winnsboro, Chesterfield, and Cheraw. Although Murphy was not much for pillaging, he did take a book from the law library in Chesterfield (3 March). Murphy thought the grand entrance of the Union troops served only to alienate the civilians: "We entered Cheraw, band playing, colors flying & regiment marching in columns by company. In my opinion, all a humbug. I don't believe in making such a spread before every Secesh place we come to" (6 March).
For most of the march, Murphy's regiment encountered only occasional skirmishers, but at the end he found himself in two full battles. In the Battle of Averasborough, "we were fighting all day, sometimes with only a skirmish line & sometimes with our whole line of battle when the work was very warm. We drove the Rebels I should think a mile & a half during the day" (16 March). Three days later came Bentonville: "We had scarcely got in position before we heard the left of the 14th Corps was turned & the Johnnies were coming down upon us. . . . They were in strong force (I should think a brigade) & were coming to turn the flank of our 3rd Brigade. We gave them a very severe flank fire, however, & it was not long before they were running in the greatest confusion. . . . For three hours there was the loudest & most continuous musketry I ever heard. The slaughter on the part of the Rebs must have been tremendous. . . . Our brigade commander gave the regiment great credit for its action, saying we saved the day for the troops on our right" (19 March 1865).
Outside of the diary entries, the volume is a memorandum book kept by Lieutenant Murphy recording his company's troops and supplies on the Atlanta and Carolinas campaigns, full of lists such as "Knapsacks Lost in Company C on the Atlanta Campaign." The lists name dozens of his troops, and other memoranda discuss hospitalizations and transfers of many other soldiers.
Lieutenant Murphy had a brighter future than the average officer. Not only did he survive the war, he was later elected Governor of New Jersey. Provenance: by descent to the consignor. 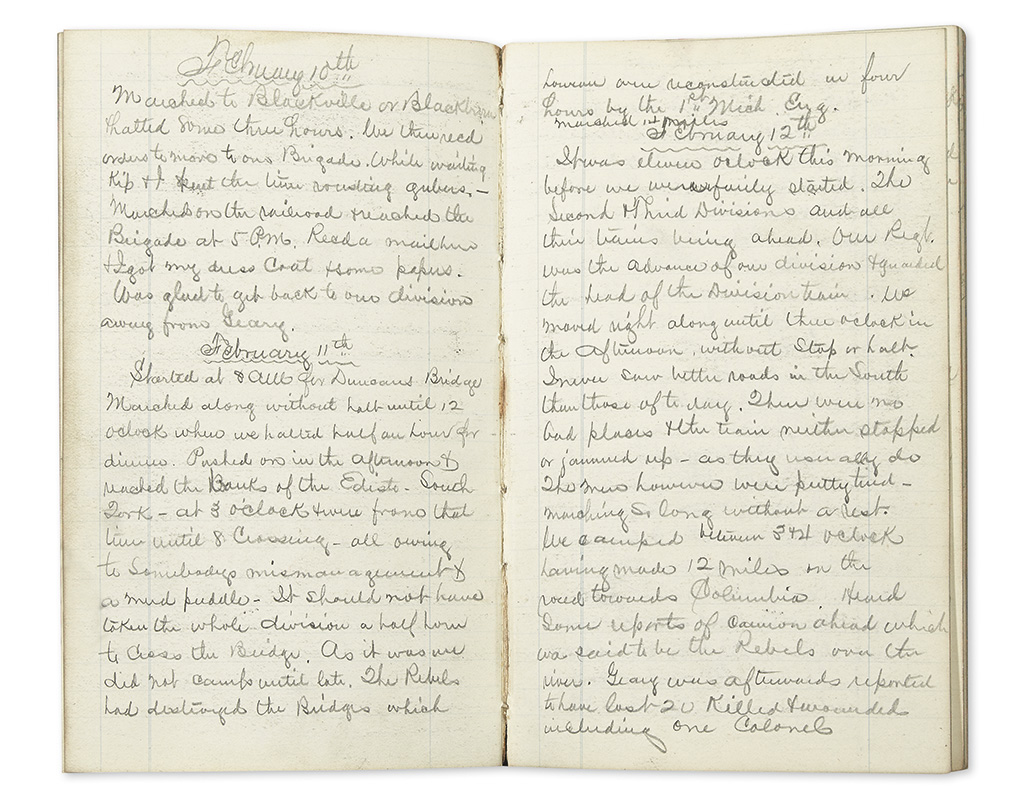