Price Realized: $ 3,000
Price Realized: $ 3,750
?Final Price Realized includes Buyer’s Premium added to Hammer Price
Estimate: $ 4,000 - $ 6,000
"THERE WAS TWO BUGS TO ONE BEAN . . . IN THIS SOUTHERN HELL" (CIVIL WAR--NEW YORK.) Pierce, Charles E. Manuscript narrative of the Battle of Wilderness and his time at Andersonville Prison. [14] manuscript pages, written in the blank leaves of a 109-page account book. Folio, original full calf, backstrip damaged, otherwise minor wear; a few leaves torn out or damaged, but only minimal wear to the narrative. [Annapolis, MD, May 1865] (in a volume with entries dated 1853-79)
Set Alert for Similar Items

Charles Edgar Pierce (1842-1907) of Floyd, NY enlisted as a private in the 146th New York Infantry in 1862. He was wounded and captured at the Battle of the Wilderness, and was sent to the notorious Andersonville Prison. While awaiting release at Camp Parole in Annapolis, MD, he had the opportunity to record this narrative of his troubles.
The narrative begins on the first day of the Battle of the Wilderness, 5 May 1864. During his regiment's retreat, Pierce "soon got halted by one of those leden mesingers." For two days, he lay without food or water between the two picket lines. Finally, on the afternoon of 8 May, he decided to make to the rebel lines to surrender: "I got two guns & made them supply the place of crutches." Once captured, he soon found his old tentmate, and they dressed each other's wounds: "Found one of his ribs sticking out an inch or more through the flesh. . . . The first move I made, I hurt him bad, but it soon got numb with swelling so I put it back all right."
In Andersonville, "we found the most filthy & sick looking men I ever saw. I never will forget the thought I had on entering that prison. I made up my mind I had done all the soldiering I would do in this world." Though Pierce's wounds were not yet healed, staying clean was impossible: "Rained for twenty-one days . . . it was mud any where we could lie & we had no blankets or anything else." The food was disgusting: "There was two bugs to one bean & five magets to one ration of bacon that was as large as angle worms in the northern states." The only source of fresh water was to dig an eighty-foot well using improvised tools: "there was great danger of them caveing in. There was several covered up in these wells alive & they never could be dug out." Though Pierce was determined to survive, "there was some that got so tired of liveing that they would walk across the dead line purposely to get shot by the guard. . . . If one of the guard shot a Yankee he got a furlough for thirty days." After surviving five months at Andersonville, on 30 September Pierce and many fellow prisoners were shipped to the Florence Stockade in South Carolina, still under construction, where he soon participated in a major prison break and was recaptured. The narrative ends with Pierce still at Florence.
The narrative is in a volume which was originally used as an cash book in Loudon, TN from 1853 through August 1863. It was at that point likely picked up by a Union army member--the 23rd Corps under Ambrose Burnside took control of the Loudon area in September 1863. The book was next in possession of W.L. Cooper, Chief Ward Master at Camp Parole in Maryland. Cooper apparently passed the book on to his successor Pierce, who was writing out his narrative at Camp Parole by May of 1865. After the narrative pages, he used another blank page to record a morning report of occupied beds at the camp on 24 May 1865. He also inscribed 5 pages of undated duty rosters at the camp; one leaf is also devoted to his family's genealogy. Pierce was discharged on 3 June 1865, and took this book back to Oneida County with him, where it was used for several brief account book entries.
with--three related Pierce items found in the volume, most notably his 21 May 1865 letter to his mother from Camp Parole, in which he announces that "I am wrighting my life in the south from the time I was taken prisoner untill I came out of Savannah. It will take some time, but it will be good to look at in years to come." 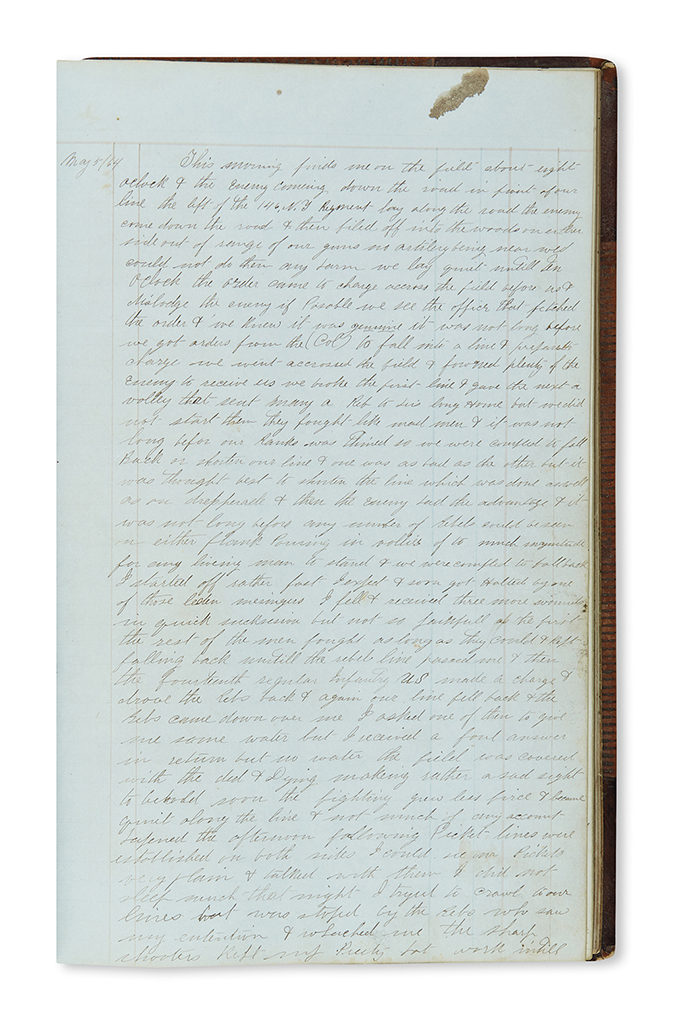