Charles Henry Riggs 1840-1916) was a Pittsburgh bank clerk. A strong Union supporter, he served in the local 15th Pennsylvania militia regiment for much of the war. At some point in May 1863, 'when the danger threatened the citizens held a meeting and agreed to a general suspension of business in order that all could go out to work on the fortifications. . . . The fortifications are very extensive, being on all the commanding hills in the neighborhood as far as Turtle Creek, connected by breastworks and rifle pits'(24 June 1863, page 95). His regiment was called up for active duty at this time, then sent back home after the Gettysburg victory (page 101). Riggs shared a railroad car with Tennessee Unionist orator Parson Brownlow, who he described as 'one of the most, if not the most, unflinching Union men in the country, and a man who has faced danger, privations, hardships, perils & even death in his maintenance of the Union cause in Tennessee. I heard him make one or two speeches on the way up at points where the cars stopped, at Steubenville & Willsville, and he is full of humor' (16 April 1862).
Perhaps the most dramatic incident in this diary was the massacre of white settlers at the Lower Sioux Agency in Minnesota, the incident which opened the Dakota War of 1862. Riggs' uncle Stephen was a missionary at the agency, and an eyewitness account suggested that he was killed in the initial assault: 'All the news received is from persons who have escaped in disguise through their lines. One mentions that he recognized the bodies of Rev. Mr. Riggs & Rev. Mr. Williamson as among the killed' (25 August 1862, page 45). He soon received a letter from his cousin Mattie Riggs explaining that the whole family had actually made a dramatic escape, quoted at length: 'We ran away from our beloved Indians on last Tuesday morning & traveled around among sloughs and swamps for a week, reaching Henderson, a distance of 100 miles from home, on last Monday afternoon. We girls walked over half the way, wore out our shoes & blistered our feet in common with the other walkers of our party, which at one time consisted on 46 persons. . . . On either side of us were slaughtering, but we were kept safe though many times dreading death any moment. Our kind Indians helped us off & would have done more if they dared' (5 September 1862, page 49).
The entries become quite sparse after 1863, but a 16 April 1865 entry describes the celebrations after Lee's surrender, then adds that 'this nation was brought to the very depths of sadness & gloom by the announcement of the assassination of our beloved president in a theater in Washington' (16 April 1865, pages 135-6). Provenance: sold by Cantrells' Books of North East, PA to the consignor, date unknown. 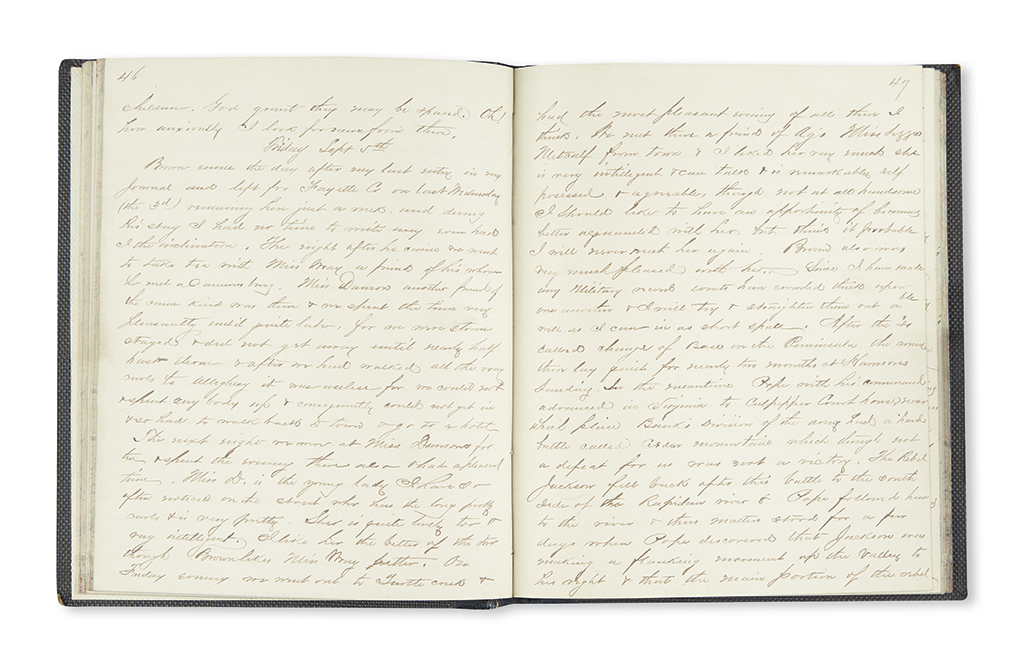