Alger Leroy Adams (1910-1992), Episcopalian minister, educator, novelist, journalist, publisher, and poet was born in Omaha, Nebraska. He was the first black graduate of Hobart College (Phi Beta Kappa, 1932) in Geneva New York, and General Theological Seminary in New York City (1947.) He was an associate editor at Ebony as well as assistant to the editor and publisher of the Amsterdam News. His first novel, "Taffy," written under the name Phillip B. Kaye (Whiteman, page 1) was published in 1950. About this time, Adams and his wife acquired the Westchester County Press, a weekly aimed at black readers, which they ran for over 30 years. During the early 1950s Adams built and presided over two churches in Westchester County, New York, St. Francis in Greenburgh, and St. Augustine (now Holy Cross) in Yonkers. In 1962, the Adamses founded The Creative Printery, specializing in the printing of high school newspapers. This developed into a hands-on workshop for young people and was accredited by several institutions. Adam's daughter said in a Hobart College tribute to her father, that it always had troubled him to accept money from the ministry. And so, as more and more of his time was taken up by the Press and the Printery--not to mention the growing civil rights movement, Adams retired from the active ministry about 1960.
Included here are the full typed manuscripts, drafts, edits and finals for Taffy (Crown Publishers, 1950) Caperberry for the Almond Tree (1954), The Colored Family Robinson, A Few Marines (1961), a homemade little book of poems from 1932, as well as copious notes for sermons, from 1935 through 1960. 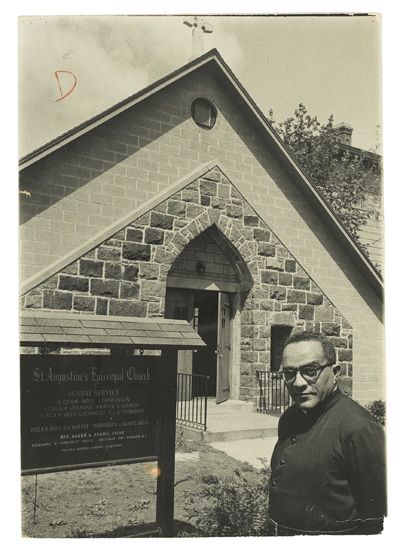