Dr. Charles H. Osgood (1808-1881) was born in Lebanon, CT, and followed in his father's footsteps with a career in medicine. He graduated from Yale in 1833 and moved to Providence, RI, where he practiced briefly before relocating in 1835 to Monroe, MI, located about halfway between Detroit and Toledo on the shores of Lake Erie. While there, Osgood speculated heavily in western lands, building his fortunes and marketing a patent medicine, India Cholagogue. In late 1840 he returned to Connecticut and established a successful drug business in Norwich, CT.
The present archive is primarily comprised of letters and other papers from Osgood's time in Michigan. A large portion consists of letters received from family members, as well as letters written to Sarah Larned of Providence, whom he began courting in 1838 and married the following year. Letters from business partners such as Charles H. Dabney and others discuss his land speculation ventures. Also included are receipts, deeds, and numerous letters of reference testifying to Osgood's upstanding character and skill as a doctor. These last appear to be retained letters of introduction which were never used. Also included here is a 13-page manuscript draft of Osgood's treatise 'The Causes, Treatment, and Cure of Fever and Ague, and Other Diseases of Bilious Climates,' first published in Monroe in 1840. The pamphlet was written to promote his patent medicine India Cholagogue, and went through at least 9 editions. Several case studies document his Providence patients, and a manuscript letter to the editor from 17 April 1842 alludes to Rhode Island's Dorr Rebellion.
The family correspondence conveys excitement and concern over Osgood's relocation to Michigan Territory. Freshly emigrated in 1835, his father writes to him on 11 September, saying: "I consider your professional business of more consequence than anything else, but am willing that you should take hold of anything else that will be to your advantage." Though he continued to work as a doctor in some capacity, Osgood seems to have spent most of his time on land speculation. A few months later, his father writes on 5 May 1836: "It would seem you have got fairly introduced into the land speculation business, it will probably occupy considerable part of your time as it will be necessary to pay considerable attention to it in order to make it profitable, as you have the management now of considerable capital. I should think the practice of physic as of minor importance, but I would not advise you to relinquish it, it may be of some advantage to you in your business of speculation by making you more acquainted with the inhabitants of your village."
Charles H. Dabney (1807-1879) was Osgood's friend and business partner; they likely met in Providence. Dabney was an executive with the firm of Brown & Ives, serving as an officer of its Blackstone Manufacturing Company. He later moved to New York and founded Dabney & Morgan with the young J.P. Morgan. Dabney's letters to Osgood discuss land shares, taxes due, and other business subjects related to their mutual affairs. He writes on 23 December 1836 to express serious concern about their prospects as speculators, which was particularly prescient in light of the Panic of 1837: "When we formed the connection there was every reason to believe that we should do a good business, but circumstances over which we could have no control . . . made it impossible to hope that we may do any thing for many months to come. . . . It is my opinion that the rage for speculation in Western lands is over, not to return for some years, tho I have no doubt that, after the present pressure is over & it is known what course the Govt will pursue, there will be a regular & good demand for western lands at fair prices." Dabney seems to have been persuaded to stick it out, as business correspondence from him continues through the archive into 1841. All told, an extensive archive of papers relating to one man's business in medicine and western land speculation. 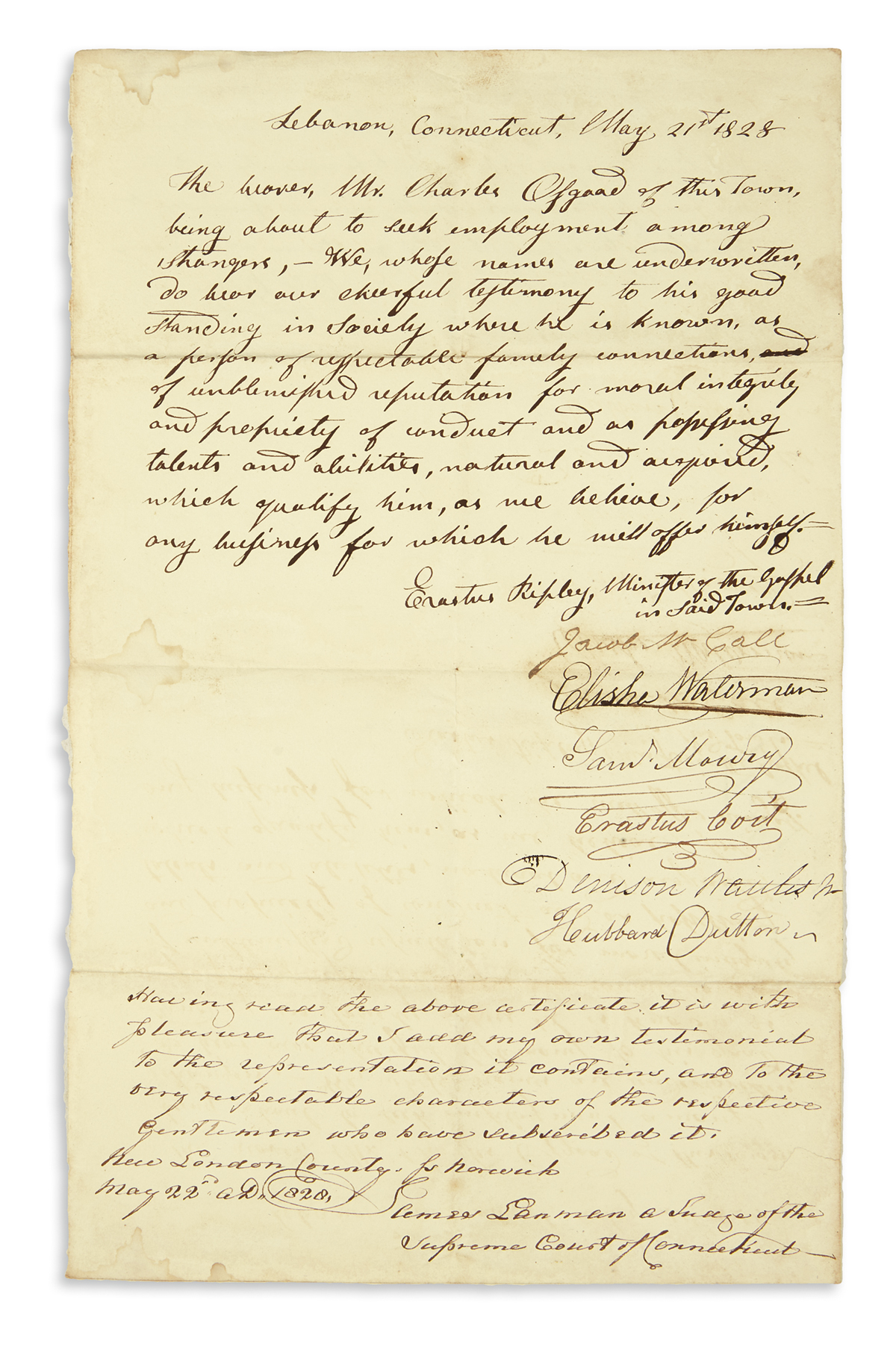