" I don't think the servants can have meat every day"

David Coupland Randolph (1804-1886) came from an elite Virginia family; his father Isham Randolph (1771-1844) was a first cousin of Thomas Jefferson. A large portion of this archive relates to the family's enslaved people in Richmond and Buckingham County, VA. David inherited the slaves as the primary heir, but was required to buy out the interest of his sisters. This seems to have left him short of cash, and the enslaved people were often hired out by the month or year, right through the final months of the Confederacy.

The collection contains at least 12 documents relating to enslaved people, including receipts for their sale, hire, or taxation from 1796 to 1860. A 1858 receipt from Sidnum Grady, keeper of Richmond's Cary Street Jail, takes commission for the sale of "girl Mary Thomas" with deductions for 32 days board, "to having teeth cleaned 50 cents & soap 10 cents." In addition, a letter to Randolph from his mother in 1846 informs him: "The new overseer has done much for us in regard to the management of our servants. They keep pretty straight."

The collection also includes 16 letters dated 1864-1865 to David C. Randolph from his nephew Isham Randolph Page (1834-1923), a Confederate surgeon based in Richmond who was helping to manage Randolph's business in the city. Most of the letters make some reference to Randolph's enslaved people: getting them hired out, collecting the fees, and tracking their movements as they moved back and forth to the city on the family's business. Most dramatically, a man named Aleck had been hired out to the Confederate Army. Page reports on 4 September 1864: "Alick came to me today complaining that he has been worked very hard & scarcely fed at all by gov't agent, to tell me that he was going home. I remonstrated with him at first, but he seemed so bent upon going to you, that I have determined to assist him in so doing. He says he is going if he has to walk, and in that event he would likely be taken up & it might give you some trouble to get him. . . . He says almost all the hands have gone off because they are driven so hard and fed so badly." On 16 April 1864 Page wrote about the increasing food shortage: "As far as my negroes go, I don't think the servants can have meat every day while people here & all over the country go without, & our servants will be obliged to take it every day now & none after a short time, or take little now and a little then." This lack of food was a common theme. A merchant wrote to Randolph in November 1863 to explain: "The reason why middlings and shoulders bring more than hams is that the former are wanted for negroes & working hands, with whom fat is a desideratum."

Edward Trent Page (1833-1906), brother of D.C. Coupland's wife Harriet Page Randolph, was a central subject of a detailed family history published in 2002, "A Way Out of No Way," by Dianne Swann-Wright (copy included). She was a descendant of the family enslaved by the Pages. Her book talks at length of her great-great-grandfather Jerry Wade (1833-1911), apparently the same Jerry Wade who was hired to work on D.C. Coupland's Buckingham plantation in December 1865, and paid $35 by a receipt in this collection. Edward T. Page also is named in a receipt dated 31 March 1865 (days before the fall of the Confederacy) in which he sells 400 pounds of bacon to Isham Randolph Page. Jerry is apparently also mentioned in a 4 December 1862 letter from William Nelson Page (1803-1883) to David C. Randolph: "I will thank you to do with man Jerry the best you can, just as you would do were he your own, and it will be entirely satisfactory to me." Two other enslaved men named in the book also appear in the archive, in a promissory note to pay Thomas West $300 "for the hire of two negro slaves named Henry Harris and Sam Johnson," Richmond, VA, 5 January 1854.

This family archive has considerable interest even beyond the family's enslaved labor force. Three letters discuss the involvement of father Isham Randolph in the James River & Kanawha Company (a doomed canal project) in 1833 and 1835, one of them from Virginia governor John Floyd (1783-1837). An 1843 stock certificate from the company is included, as well as three illustrated certificates from the Farmers Bank of Virginia, 1854-1855. Several letters evoke the drama of the Confederate home front during the Civil War. David's sister Judith Randolph Swann (no relation) wrote from Mississippi in 1863 about her fear of the invading Yankees: "Of all humans they are the most detestable. Even the sight of one makes me shudder." Also included are a pair of inventories of captured supplies compiled by Confederate major Beverly Randolph, 20 July 1863 and undated. Just a month before the fall of Richmond, Isham Randolph Page wrote "The vile Yankees seem to be closing in on Rich'd in all directions where they don't expect to meet with armed men. . . . I fear from all I hear that Mann [Page] was captured by the Yankees this day. He left here only the day before in fine health & spirits. Carter & Bob were at Early's Hdqs & they too were also captured. Beverly Randolph (Col. Bev's son) was shot on the train of cars as it moved off from Greenwood & killed on the spot."

Additional details on the key documents in this collection are available upon request. 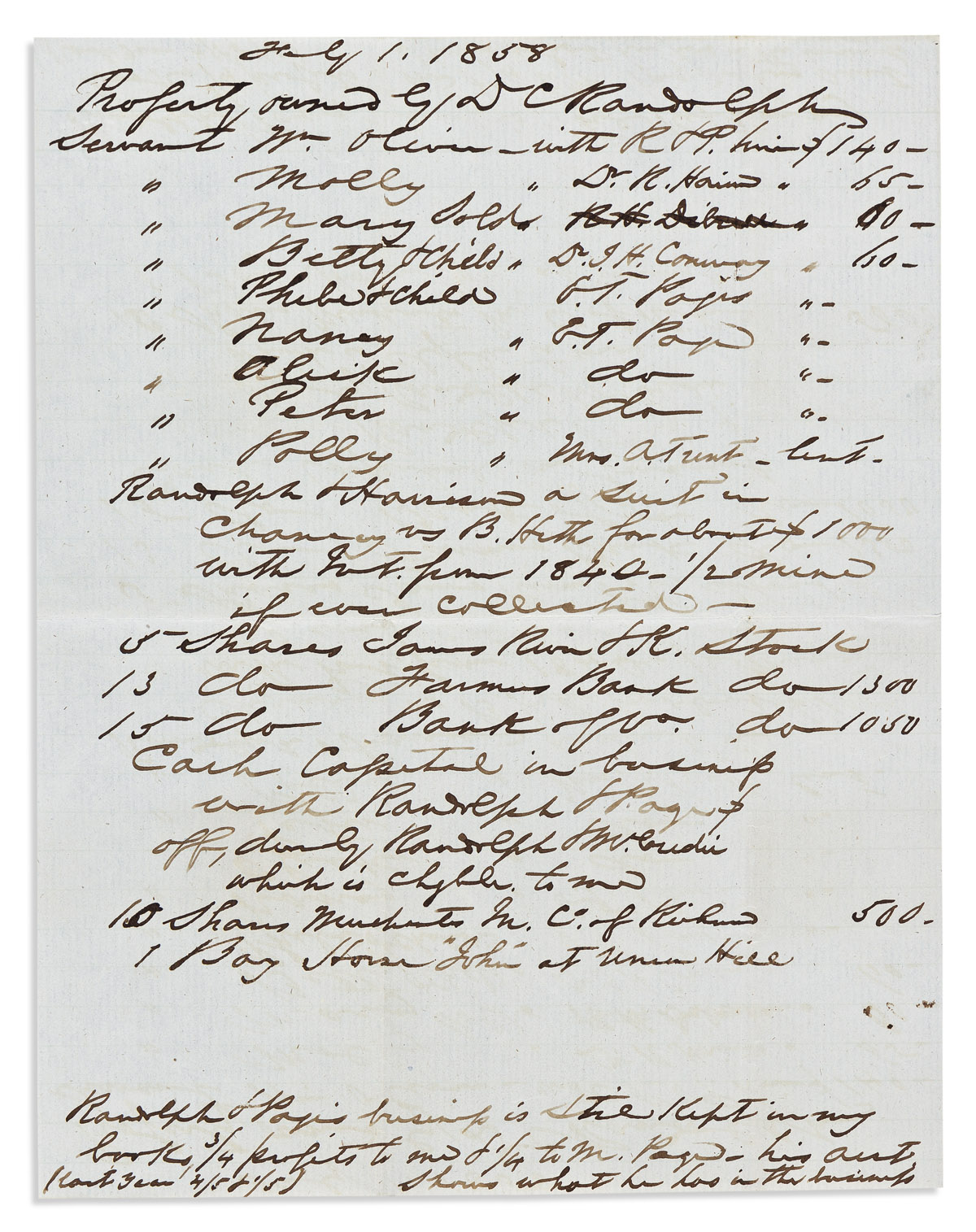