A slave-owner named Thomas Henry Hall (1744-1788) died young in Washington County, MD, leaving behind 5 young children. A trustee apparently managed the plantation, while ownership of some of the enslaved people was divided among the children. In 1802, with those children reaching or approaching adulthood, they started demanding a cash legacy from the estate. It was necessary to deduct the cost of their upbringing--and the expenses of "legacy slaves as were not worth their maintenance"--from the plantation's profits. Thus the cost of feeding the enslaved people with no economic value was counted in the same columns as feeding the master's orphan children who had no economic value.

For each of five Hall children, we have a year-by-year accounting from about 1788 to 1802. Each child is assessed a fee each year for "board, washing &c," clothing, the occasional doctor's bill, and (when old enough) tuition. They are also charged for slaves who were unable to work. For example, eldest son Thomas Jr. (born 1780) is charged about £5 each year for "maintenance of Sam" until Sam's disappearance in 1792. Eldest daughter Betsey (born 1781) is charged each year for "Maintenance of Ossen," with a midwife's fee added in 1789 (presumably a miscarriage), another midwife's fee in 1792, and then the arrival of Jade on her rolls through 1796. Daughter Letitia (born 1787) was the owner of Jem & Milley until Jem disappeared in 1793 and Milley "went to Renches" in 1795. Daughter Hannah was charged for her own board only through 30 April 1790, and then for her own burial expenses(!), but continued to be charged for the maintenance of Phillis, Monacy, John, Abram, and Frank at various points, including midwife's fees and smallpox inoculations. Similarly, youngest daughter Barbara was charged for her own "nursing, funeral expenses in the year 1791" but her infant estate continued to be liable for her enslaved people: Jenny's doctor bill in 1794, Maria's maintenance from 1797-1799 ending with a midwife's fee and her disappearance, followed by the arrival of Eliza in 1800. If we understand this properly, Eliza was born into slavery in 1799 to a mother who died in childbirth, and was owned by the estate of a baby girl who had been dead for eight years. The accounting concludes with "maintenance of such of the common stock of slaves as were not worth their maintenance." These enslaved people were apparently property of the estate and not given to individual children. This introduces us to Old Lucy, Peter (died in January 1791), William, Ned, Joe, Charles, Bob, Robert, the younger Lucy, and Jim.

The final page includes a brief note explaining this unusual account. It was assembled by order of the Orphan's Court, and this was a personal copy of the official report. The man tasked with this work was a local land speculator and slave trader from Hagerstown, MD named Colonel Nathaniel Rochester. He later relocated to western New York in 1810, and soon founded the city which bears his name. The handwriting in this account matches that in his slave-trading accounts, as published in the 2009 Rochester History article "'We Called Her Anna': Nathaniel Rochester and Slavery in the Genesee Country." 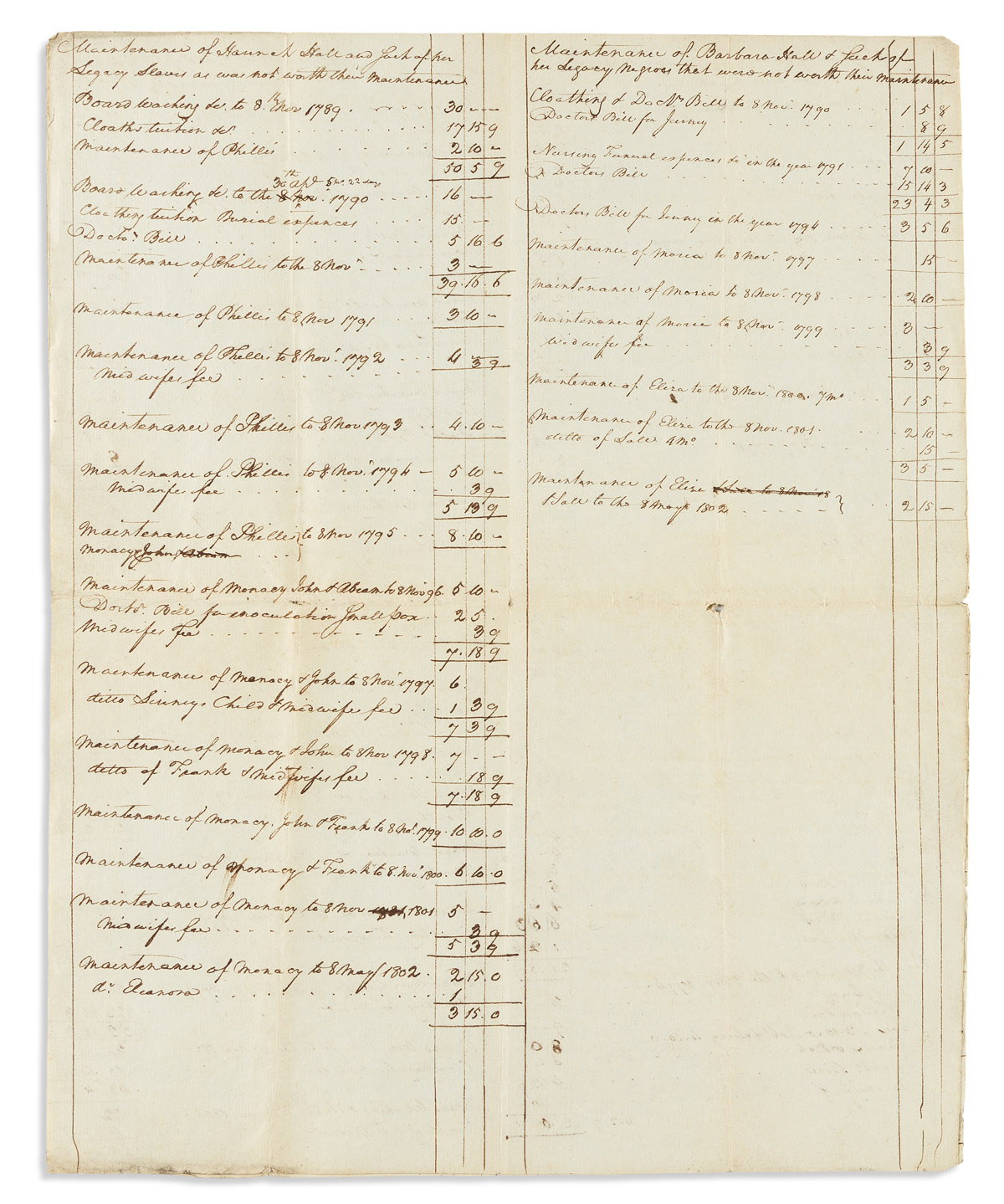